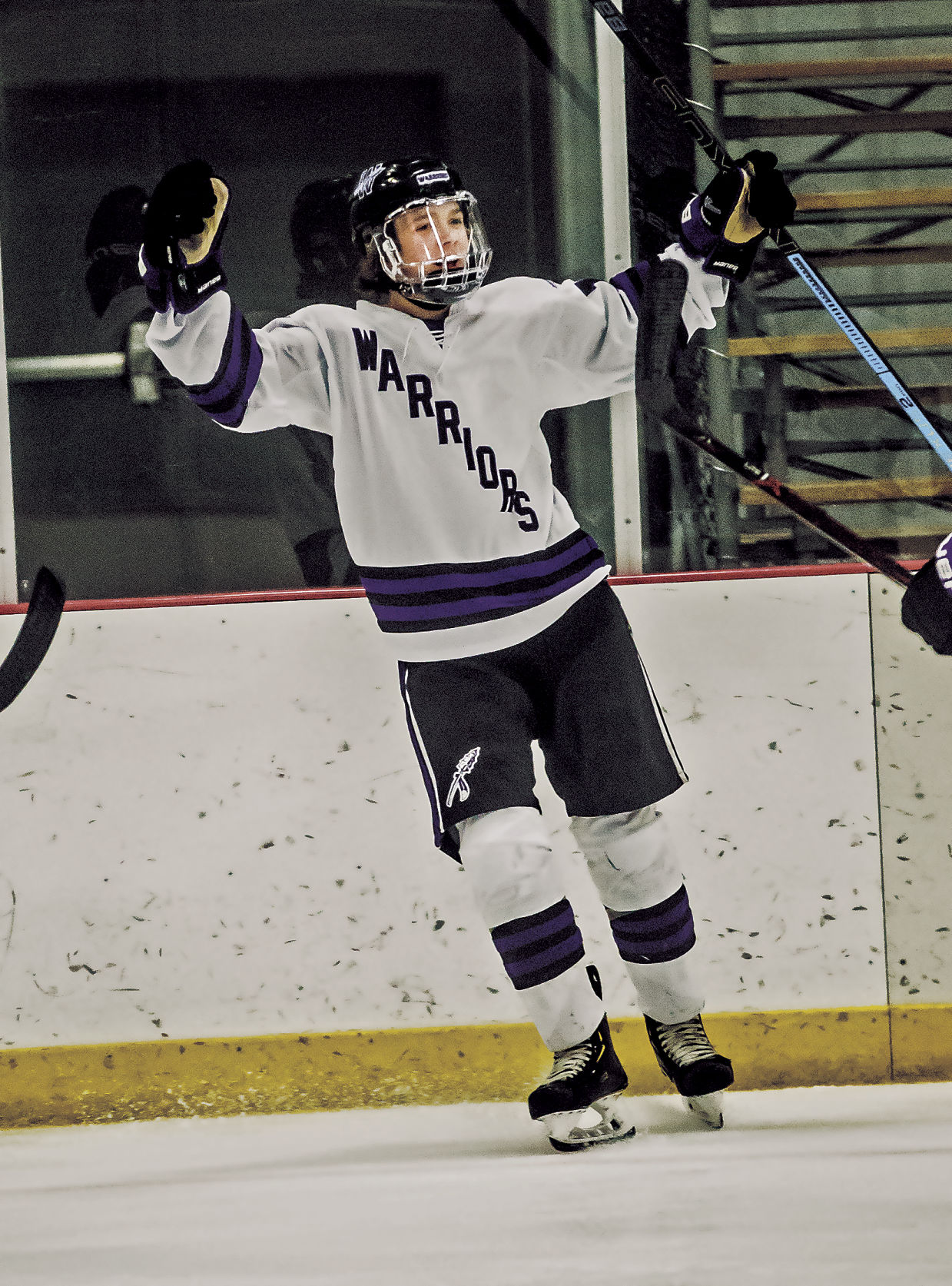 Isaac Nett celebrates one of his first-period goals against Beaver Dam. Nett had a huge game, recording a hat trick and four assists as Waunakee defeated the Golden Beavers 9-2. 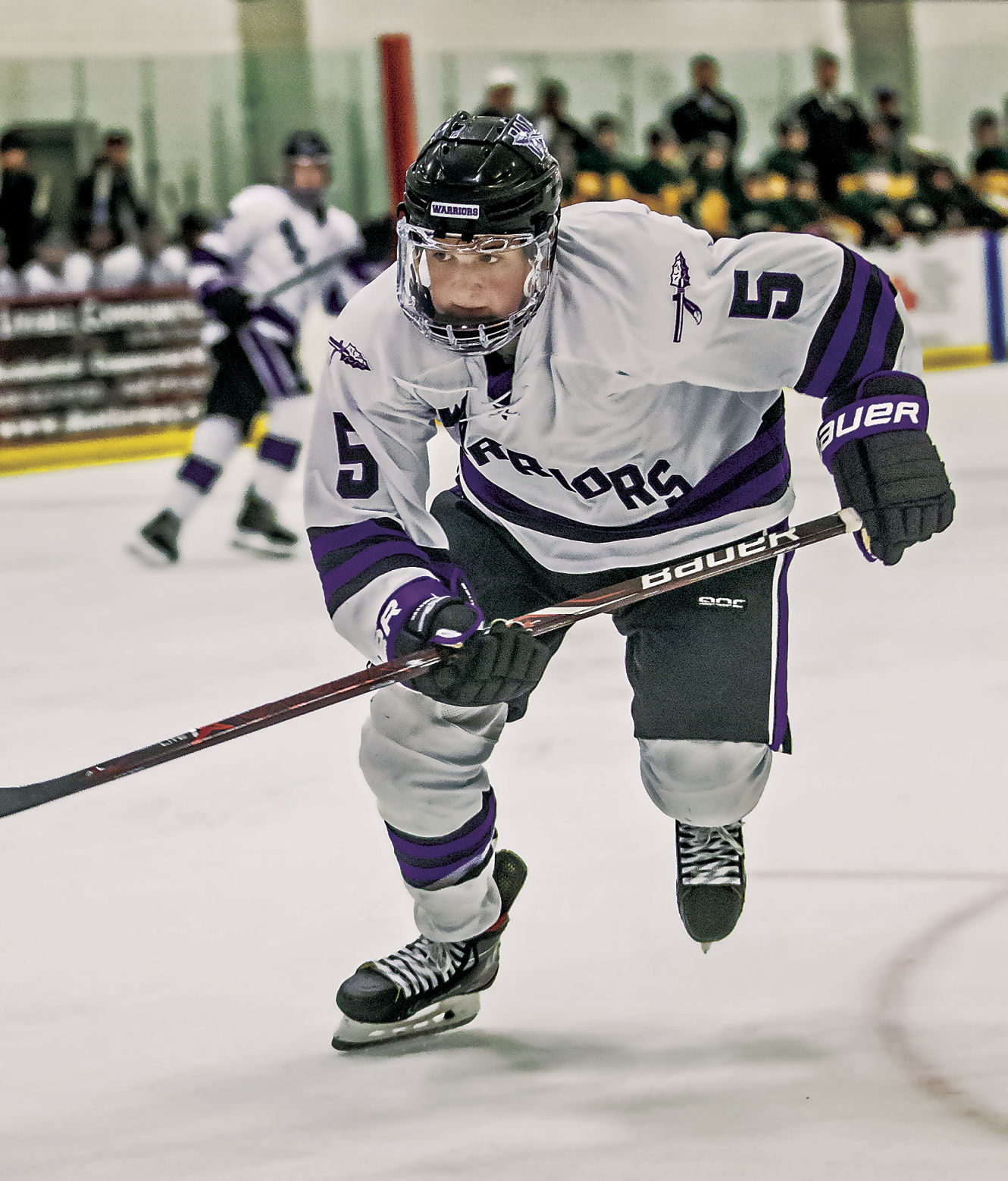 Steven Pasinato races towards the puck during the second period of Thursday's game against Beaver Dam. Pasinato racked up six points - scoring twice and tallying four assists - in Waunakee's 9-2 victory over the Golden Beavers.

Isaac Nett celebrates one of his first-period goals against Beaver Dam. Nett had a huge game, recording a hat trick and four assists as Waunakee defeated the Golden Beavers 9-2.

Steven Pasinato races towards the puck during the second period of Thursday's game against Beaver Dam. Pasinato racked up six points - scoring twice and tallying four assists - in Waunakee's 9-2 victory over the Golden Beavers.

On paper, the matchup was a doozy.

The Waunakee boys’ hockey team was 7-3 and stood atop the Badger North with an unbeaten conference record. Coming into their barn was Beaver Dam, just a game behind in the standings and eager to avenge their last-minute loss to the Warriors less than a month ago.

The Warriors quickly demonstrated why games aren’t played on paper; Waunakee controlled every aspect of the contest to deal the Golden Beavers a 9-2 loss, remaining the leaders in the Badger North.

“We just came out more relaxed…” said Waunakee forward Isaac Nett of the difference between this game and Waunakee’s Dec. 10 contest against the Golden Beavers. “Every period, we didn’t know what the score was. We went out to score every time.”

Nett’s linemate Steven Pasinato opened up the scoring just 86 seconds after the puck dropped. The goal was just the opening act in a monster first-period for the Waunakee junior; Pasinato added a second goal with 8:21 to play in the first, and assisted Nett on two more goals to make it a 4-0 game before the period was out.

“Me and Steve have always been pretty close,” said Nett of the chemistry between him and Pasinato. “He’s always got my assists, and I’ve always got his assists.”

“The line of Danny Reis, Steven Pasinato and Isaac Nett: they’re a very good line when they play well,” added Waunakee’s Head Coach Eric Olson. ‘They find each other, they’re unselfish, they move the rubber… Their hockey IQ – all three of them – is very good.”

Nett completed the hat trick – his second hat trick in a row – in the second period at the 13:08 mark, three minutes after assisting Reis on his first goal of the night.

Waunakee pushed their lead to 7-0 – with Erik Mikkelson notching his second goal of the season – before Beaver Dam scored on a power play to avoid being shutout.

The Golden Beavers cut into the Warrior lead once more midway through the third, but Waunakee’s 7-2 lead was too much to overcome. The Warriors scored twice more – getting goals from Reis and Will Roe – before time expired to hand Beaver Dam their third loss of the season.

“I think we’re just starting to find who we are. Everybody’s competing in our own team for playing time and ice time,” said Olson. “Up in River Falls, we talked about it: earn your next shift. We’ve got a lot of people that want to play, and we’re pretty deep. When they’ve got to earn their next shift, they play hard, and they play the right way. We were playing the right way tonight.”

Starting in goal, Ben Luebke saved 26 of the 28 shots sent his way to earn another win. Leading in the points column for the Warriors were Nett – who added four assists to go along with his hat trick – and Pasinato, who also had four assists. Mac Reed notched two assists, while Logan Burgard, Tyler Hoffman, Pavel Rettig, Drew Christainson and Cade Jakacki all recorded one assist. The Warriors outshot the Golden Beavers by a 45 to 28 margin, including a staggering 20 to 4 advantage in the opening period.

Though Waunakee, now 8-3-0 (4-0-0 Badger North) is leading the Badger North and riding a wave of momentum on the heels of beating last two opponents by a combined 15-3, they’re taking nothing for granted with their upcoming schedule.

“It’s pretty sweet...” said Nett of remaining atop the conference. “We’ve got to keep it up though. We can’t let our guard down.”

The Warriors travel to Sauk Prairie – second in the Badger North by a game and a half – coming up next.

“We’ve got a big game against Sauk on Tuesday,” said Olson of Waunakee’s Jan. 7 contest scheduled for a 7 p.m. puck drop. “It’ll be a barn-burner.”