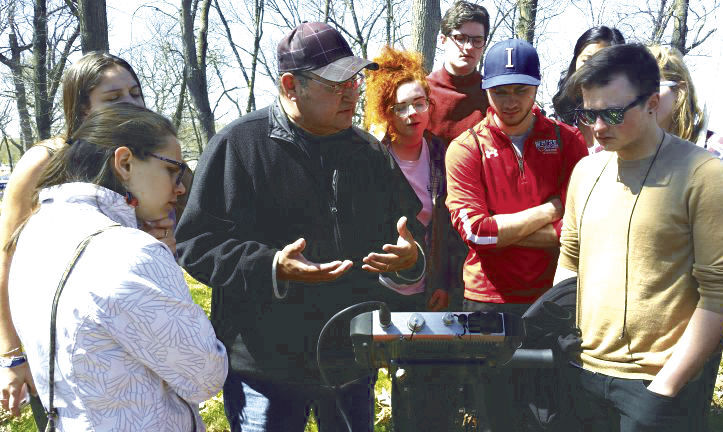 Ho-Chunk Nation THPO Bill Quackenbush served as co-instructor for the 2017 capstone course in which UW students partnered with the City of Monona to promote cultural awareness in area parks and schools. Quackenbush will serve as a resource for students tackling similar projects in the Village of Waunakee. 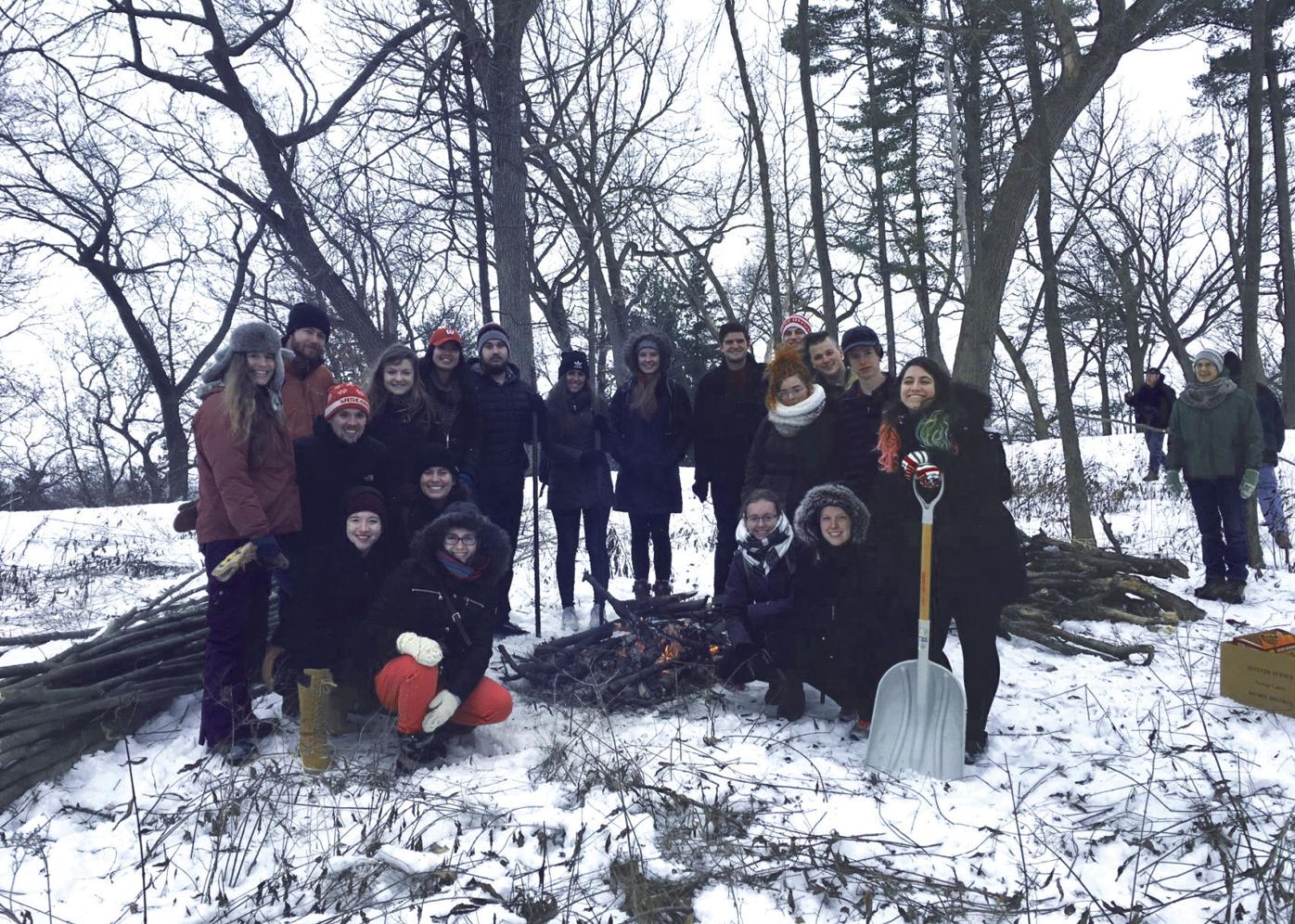 Students in UW Professor Jessie Conaway’s 2017 Environmental Studies Capstone course gather at Woodland Park in Monona, where the class designed park projects to promote awareness of the Ho-Chunk people. Conaway will lead a similar project in Waunakee, with students that she has in the class this year.

Ho-Chunk Nation THPO Bill Quackenbush served as co-instructor for the 2017 capstone course in which UW students partnered with the City of Monona to promote cultural awareness in area parks and schools. Quackenbush will serve as a resource for students tackling similar projects in the Village of Waunakee.

Students in UW Professor Jessie Conaway’s 2017 Environmental Studies Capstone course gather at Woodland Park in Monona, where the class designed park projects to promote awareness of the Ho-Chunk people. Conaway will lead a similar project in Waunakee, with students that she has in the class this year.

Representatives from the Ho-Chunk Nation, UW-Madison and the Village of Waunakee took part in a virtual meeting last week to kick off their partnership in the UniverCity Year program.

The meeting marked the start of a three-year collaboration between the Village of Waunakee and UW’s UniverCity Alliance to improve race relations, social justice, inclusion and civility in the village where recent events have suggested a need for greater DEI efforts within the community.

“This past year was very, very interesting with pressures placed on us in many areas of concern,” Village Administrator Todd Schmidt said. “One of the biggest for us was the issue of racism as well as the lens on local government in terms of what we are doing to address it. What we’ve realized here is that we are not doing enough and that is what presented the perfect alignment of project stars.”

Schmidt has been working with administrators of the UniverCity program over the past several months to identify projects that they believe will help the community in its pursuit of inclusiveness.

One project has focused on appropriate ways to recognize the area’s Native American inhabitants.

A professor at UW-Madison’s Nelson Institute for Environmental Studies, Dr. Jessie Conaway said the project has been this year’s assignment for a capstone course she teaches at the college.

Conaway led a similar course in 2017 for the UniverCity program in which students of her 600-level Environmental Studies Capstone partnered with the City of Monona to design projects that promoted cultural awareness of the Ho-Chunk people in area parks and schools.

She said the same type of deliverables could be produced for the Village of Waunakee.

“Similar to this project,” Conaway said, “the students at that time drafted curricula to be used in the Monona schools for elementary, middle and high school education about Ho-Chunk history and people. We also worked together to make recommendations for a cultural-resources management plan for Monona, around stewardship of (burial) mounds and other cultural resources.”

Conaway said students will be consulting representatives from the Ho-Chunk Nation to ensure that the outcomes they produce are both accurate and culturally sensitive at the same time.

Quackenbush said the process of recognizing Native communities in the region begins by acknowledging the fact that indigenous people have existed in Waunakee and its surrounding area for thousands of years.

“Some of our beautiful oral history and stories talk about our presence here since the last glacial period,” Quackenbush said. “Archaeological terms unfortunately are what the majority of the public tend to hear day in and day out… But they never really give a true accounting of who these people really are. And that’s our ancestors, the Ho-Chunk people.”

Quackenbush noted that the Ho-Chunk people had an oral tradition in which tribal history was passed down through storytelling, rather than written accounts of historical events that took place.

That fact has made it difficult for non-tribal members to gain an accurate understanding of the culture.

Quackenbush said signage that highlights the Ho-Chunk people and their culture, such as those in Monona parks, could create a longer-lasting awareness among members of the community.

“If we create those documents, that signage – this and that, that tells the stories so that people can see this at any time of their choosing – that’s a little more permanent than some of these current things that we often do,” Quackenbush said. “So I’m excited to see exactly what the Village of Waunakee has the ability to do, working with all these different entities.”

Students in Conaway’s class have already created a list of projects that they will be undertaking for their part in the program, including:

- Presentations that could be done about Ho-Chunk culture

- Educational programming that could be offered in the Waunakee school district

- Parks- and greenspace-management/maintenance protocols as part of a CRM

- Recommendations for ways to honor the Ho-Chunk people at Waunaboom

More information about this and other projects that Waunakee has identified in its partnership with the university can be found on the village website, at vil.waunakee.wi.us/920/UniverCity-Year-Projects.