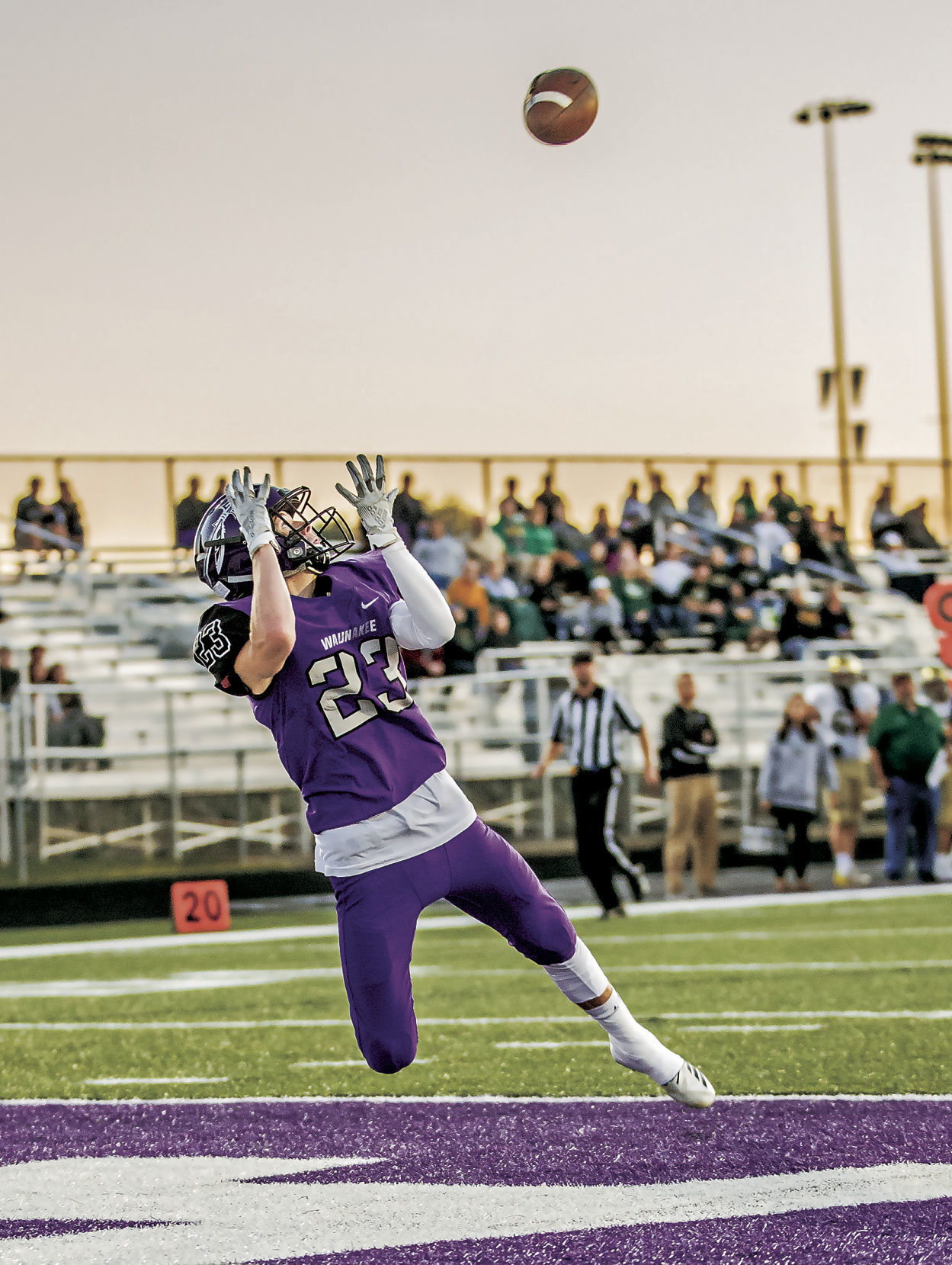 Isaac Schaaf hauls in a touchdown pass earlier in the season for the Warriors. Schaaf had a pair of touchdown catches — including a 65-yarder late in the fourth-quarter — in Waunakee’s 35-28 win over Reedsburg. 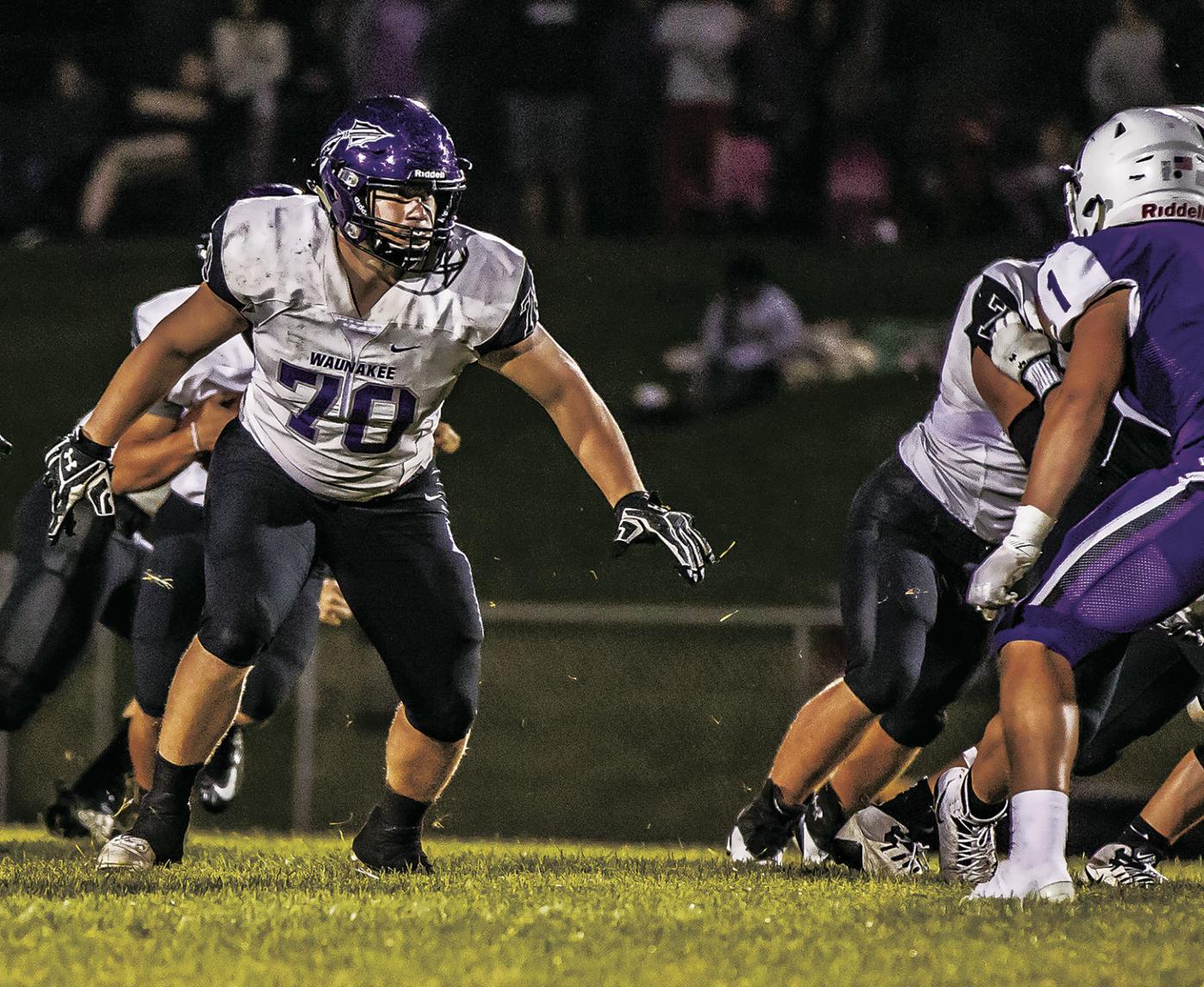 Thomas Meffert searches for a defender during an earlier game for the Warriors. Meffert and the Hogs were key to Waunakee’s victory this past Friday at Reedsburg, opening holes for Warrior backs to rush for 278 yards.

Isaac Schaaf hauls in a touchdown pass earlier in the season for the Warriors. Schaaf had a pair of touchdown catches — including a 65-yarder late in the fourth-quarter — in Waunakee’s 35-28 win over Reedsburg.

Thomas Meffert searches for a defender during an earlier game for the Warriors. Meffert and the Hogs were key to Waunakee’s victory this past Friday at Reedsburg, opening holes for Warrior backs to rush for 278 yards.

Heading into Friday’s contest, it was well-documented that the Warrior football team was pretty good, as shown by their average margin of victory of over 36 points per game.

On Friday, the Badger North learned how Waunakee responded to a stiff challenge. The Reedsburg Beavers and their trademark option attack on offense hung around for four quarters in the first real test of the season for Waunakee.

The play of the night came late in the fourth quarter with the score tied at 28; Waunakee faced a third and eight in their own territory. With the game on the line, Waunakee’s offense delivered; Caden Nelson hit Isaac Schaaf – who had beaten his man in one-on-one coverage – on a long pass, and Schaaf did the rest, racing 65 yards into the end zone for the game-winning score.

“Caden hung in there in the pocket, stepped up and made a nice throw; Isaac finished the play,” said Waunakee’s Head Coach Pat Rice. “The corner tried to undercut a deep ball, Isaac stayed with it, Caden stepped up and threw it and the offensive line did a nice job giving him time to step up. It was a team effort.”

The Warrior defense finished the job on the ensuing possession, stopping the Beavers on fourth and inches to preserve the win. The turnover on downs was one of two crucial stops forced by Waunakee’s defense in the fourth quarter; the other came on a recovered fumble by Joe Hauser.

“When you get drug into deep water like that, to come out and do what we did in critical plays, big stops, I think that speaks a lot about our resolve and our kids hanging in there and staying in the fight,” Rice added.

To get to that 28-28 score late in the fourth quarter, both teams relied heavily on their run games. Reedsburg’s option offense rushed for 308 yards, while Waunakee’s Hogs opened up holes all night. A pair of Waunakee backs – Nelson and Cole Mobley – broke the 100-yard mark, and each found the end zone once. Mobley and Schaaf are two of a number of players who have stepped into large roles, as the Warriors have had to deal with injuries throughout the year.

“If there was a calling card with this group, it has been next man up…” said Rice. “We’ve had different people step up. Certainly Cole had a nice ball game: great ball security, got us a bunch of tough inside yards. Isaac: what can you say? He’s made a number of big plays throughout the year… They both put in tremendous work in the offseason for their opportunities, so it’s not really a surprise.”

Nelson and Mobley each found paydirt in the first quarter to put Waunakee up 14-0, but an immediate response by Reedsburg saw Casey Campbell score twice, and the teams head into the second with the score tied at 14.

In the second quarter, a pair of Nelson touchdown passes – one to Schaaf and another to Andrew Keller – gave Waunakee a 14-point lead heading into the third. Reedsburg’s ground game continued to churn away, though, and two more scores by Campbell put Waunakee in position for their late theatrics.

Nelson was 15 for 24 on the night, accounting for 193 yards and three scores through the air. He was also the team’s top gainer on the ground, rushing for 138 yards and a score, followed by Mobey with 124 yards and a touchdown.

Schaaf had 94 yards on four catches – two of them for touchdowns – while Jordan Wuensch and Keller were next on the team with 59 and 39 receiving yards, respectively.

Waunakee (7-0, 5-0 Badger North) returns to Warrior Stadium on Friday for their final home contest of the regular season against Portage. Start time for Friday’s homecoming game is scheduled for 7 p.m.

Connor Carroll recovered two fumbles, including one in which the Reedsburg ball carrier bobbled a lateral and Carroll snatched it out of the air, taking it 55 yards for a touchdown. Gavin Maier pounced on two fumbles as well, while Trey Kenas recorded an interception and a fumble recovery. Coltn Healy and Jack Lempe got into the action with fumble recoveries of their own.

On offense, quarterback Cody Nelson connected with Ben Farnsworth on a 16-yard touchdown pass as well as on a 41-yard scoring strike to Tony Polzer.

Peter James rushed for a dazzling 20-yard touchdown and Michael Gnorski added a 12-yard scoring scamper to complete the blowout.

Waunakee’s varsity reserve squad improved to 7-0 on the season.