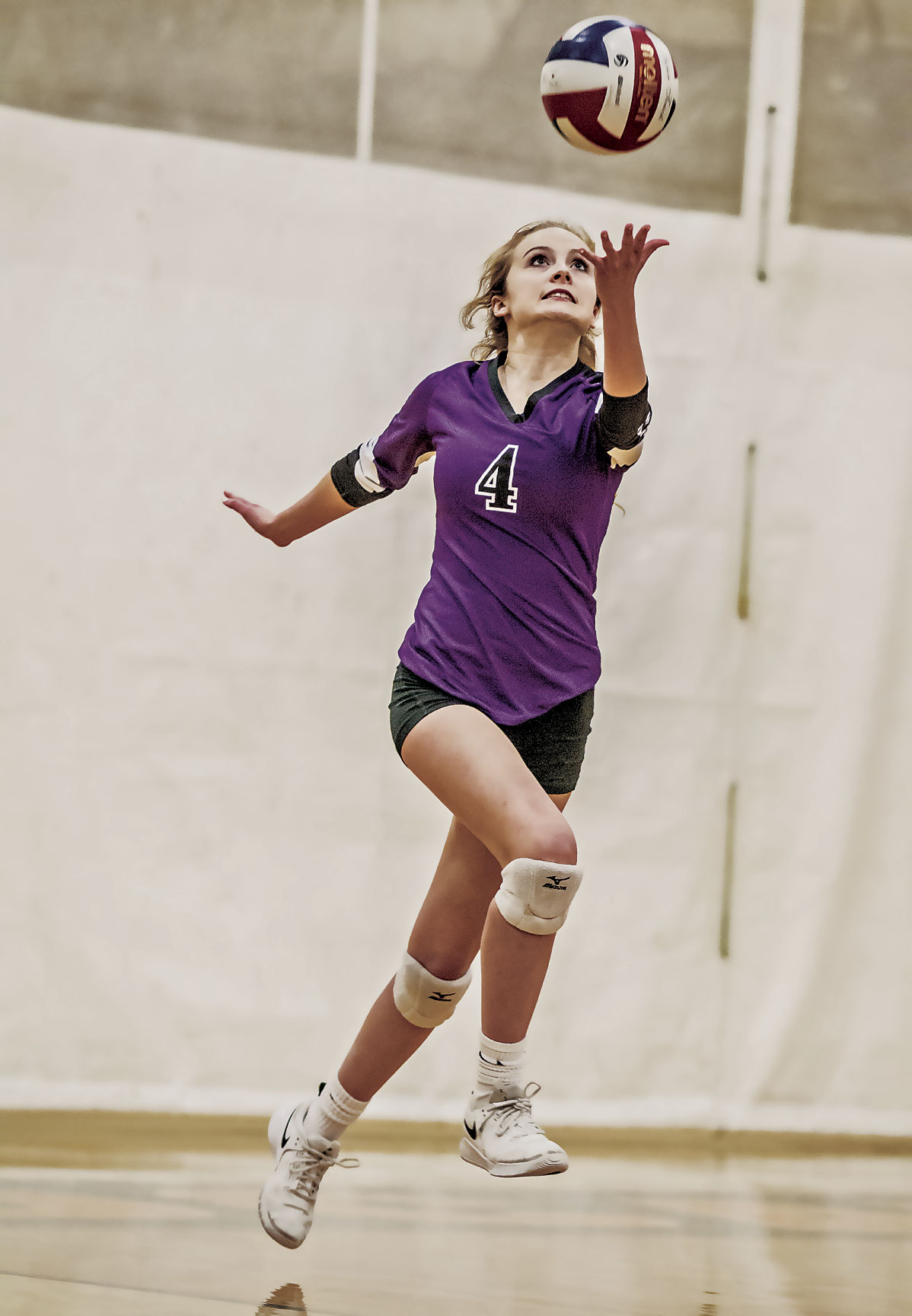 Jordyn Grigg lifts the ball to send a serve over the net during Thursday's contest against DeForest. Grigg's four aces - including three during a 6-0 third-set run for the Warriors - were key to Waunakee's WIAA Sectional Semifinal victory. 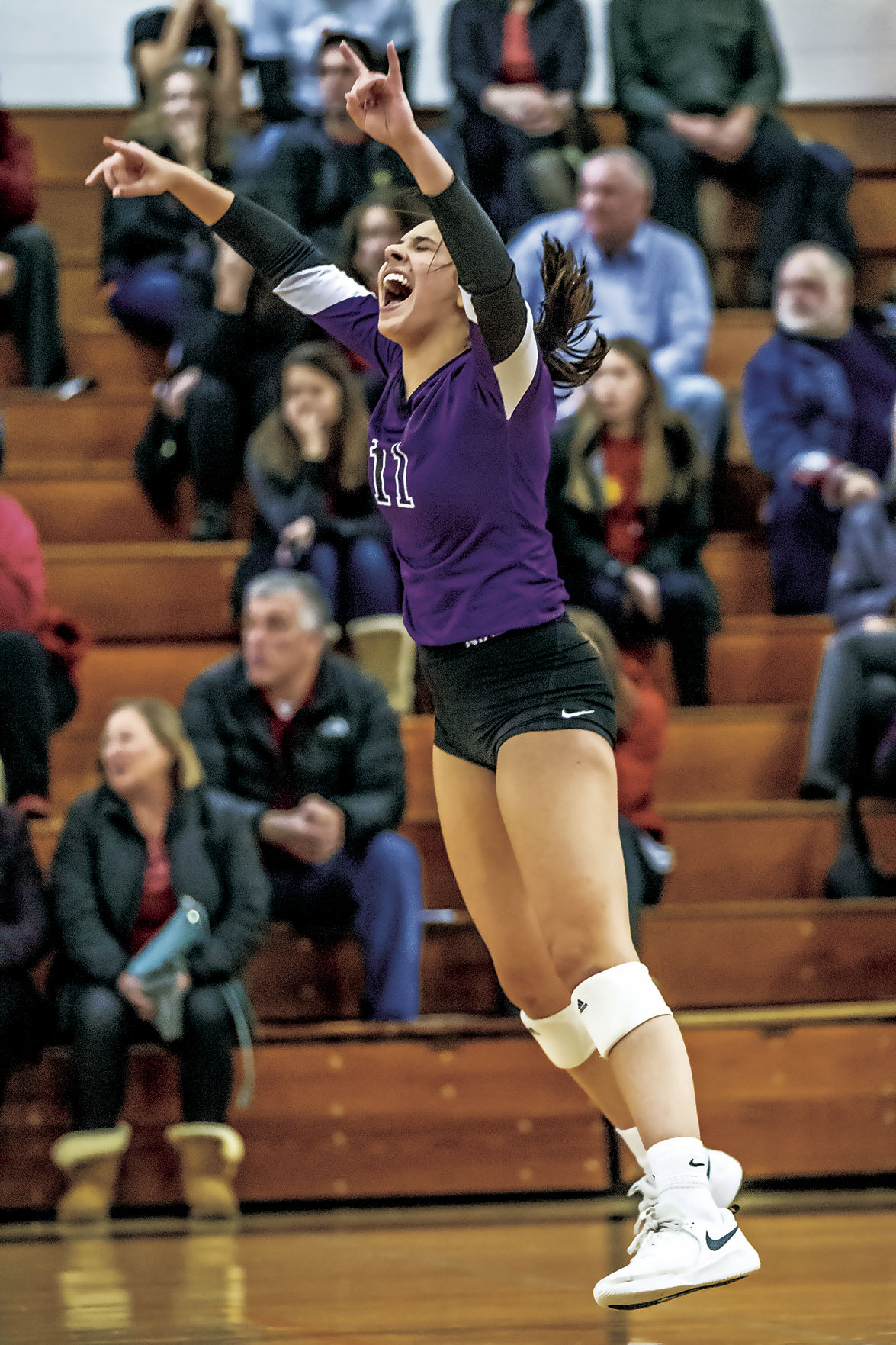 Sam Miller celebrates after Waunakee wins a point in the fourth set against DeForest Thursday night.

Jordyn Grigg lifts the ball to send a serve over the net during Thursday's contest against DeForest. Grigg's four aces - including three during a 6-0 third-set run for the Warriors - were key to Waunakee's WIAA Sectional Semifinal victory.

Sam Miller celebrates after Waunakee wins a point in the fourth set against DeForest Thursday night.

Only one game now stands between the Waunakee volleyball team and a trip to the state tournament.

The defining moment for the Warriors came in set number three. Tied at one set apiece, Waunakee found themselves trailing DeForest by a wide margin early in the third set: 13-5. Facing a potential 2-1 deficit, Waunakee’s Jordyn Grigg stepped up to serve.

“It’s absolutely huge,” said Waunakee’s setter Sam Miller on the spark Grigg’s serving gave the team. “It gets us a really big momentum swing; after that, the other team gets in their heads a little bit; they start getting down on themselves.”

“We know they are one of the toughest-serving teams that we’ve faced…” added Waunakee’s Head Coach Anne Denkert of DeForest. “Serving tough is really our only recourse for that. They’re serving tough to us; we have to counter with that.”

Now down just 11-13, Waunakee continued to stick around in the third. The Warriors finally took their first lead of the set at 24-23, and won three of the next five points to steal the victory. Milla Malik finished the job for Waunakee, recording back-to-back kills with the score tied 25-25.

In the fourth, DeForest once again built a lead midway through the set, threatening to take the contest into a fifth set. Down 14-17, Grigg stepped up to serve once again. The Waunakee junior recorded her fourth ace of the night as the Warriors turned a 14-17 deficit into a 19-18 lead.

“We’ve all got to keep our heads up; we really motivate each other,” Miller added. “The bench helps out a lot when a good play happens… I don’t think we get very down on ourselves.”

With momentum at their backs, Waunakee took six of the remaining 10 points to take set number four – and the game along with it – 25-21.

While the Warriors got off to a good start against the Norskies – taking a 12-9 lead to open the game – both teams had to quickly adapt to the environment at Verona Area High School. A lower ceiling than either team is typically used to resulted in a pinball-like game on many digs in the first set.

"I felt like we were never really in a good rhythm,” said Denkert. “The ceilings are low, so we’re digging balls and balls are ricocheting all over the place. You have to adjust to the environment.”

Trailing by three points, DeForest proved to adjust a bit faster than the Warriors and ripped of a 4 to 16 run to take the first set 25-17.

Though the Warriors never recorded any big run in the second, they never allowed the Norskies to build any momentum, either. With the score tied at 11, Waunakee gradually built a lead as the set wore on, ultimately taking set number two by a score of 25-20 to bring the game to its defining third set.

Malik led the Warriors in kills with 20, while Jocelyn Meinholz recorded 20 digs. Miller racked up 19 aces, and Grigg’s four aces paced Waunakee on the night. Chloe Larsen’s five blocks were best on the team.

Waunakee now has just two days to prepare for their WIAA Sectional Final contest against the winner between Verona and Sun Prairie.

“That’s not our best volleyball; I’ve seen us play better than that…” said Denkert. “Now it’s going to be a quick turnaround for Saturday. I think they’ll look at the film and go, ‘We’re a better team than this, so we’ve got to play better than this if we want a chance.’”

“We played both of them in summer league and they were both really good games…” Miller added. “It’s going to be fun either way.”

Saturday’s Sectional Final – where the winner will earn a spot in the state tournament – is scheduled for 7 p.m. at Sun Prairie.