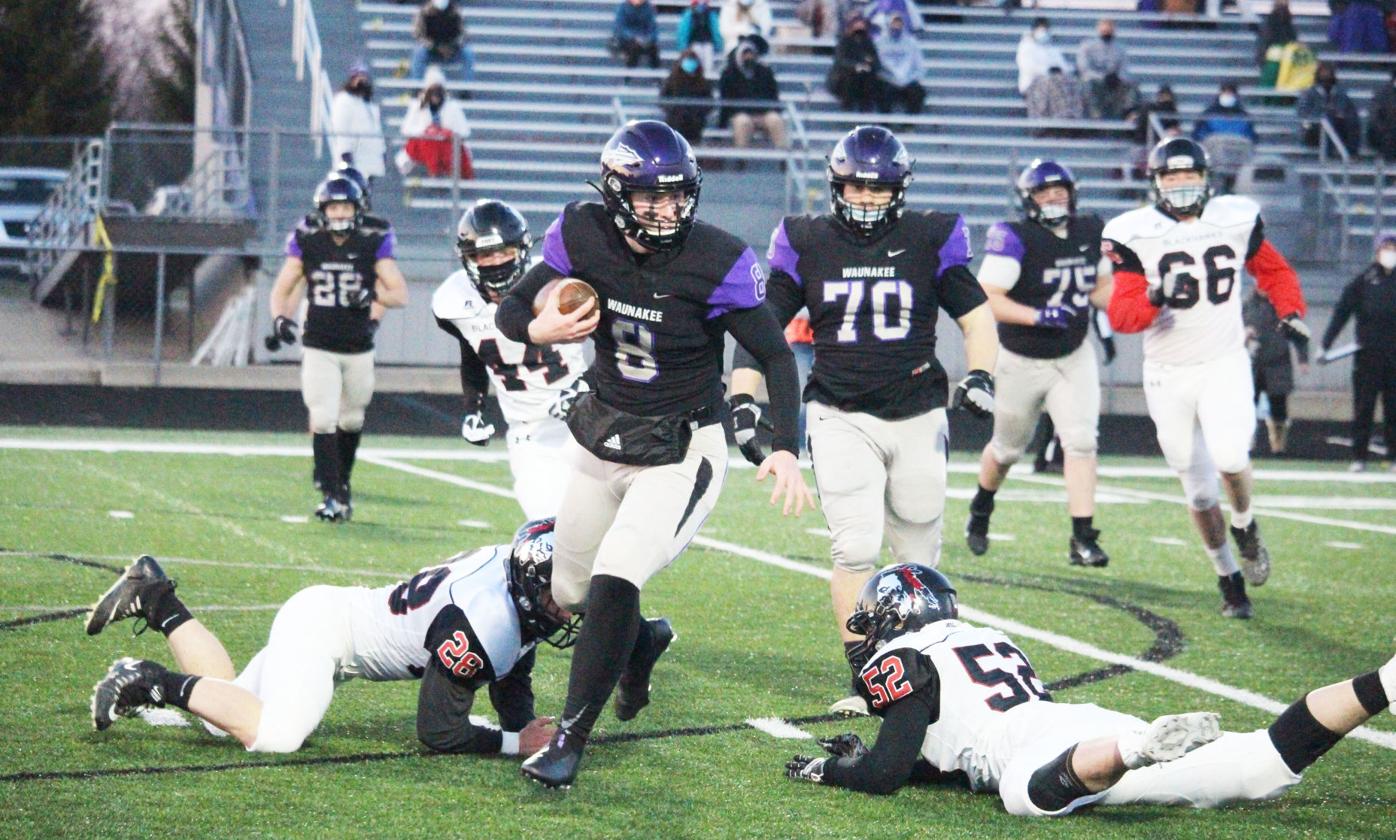 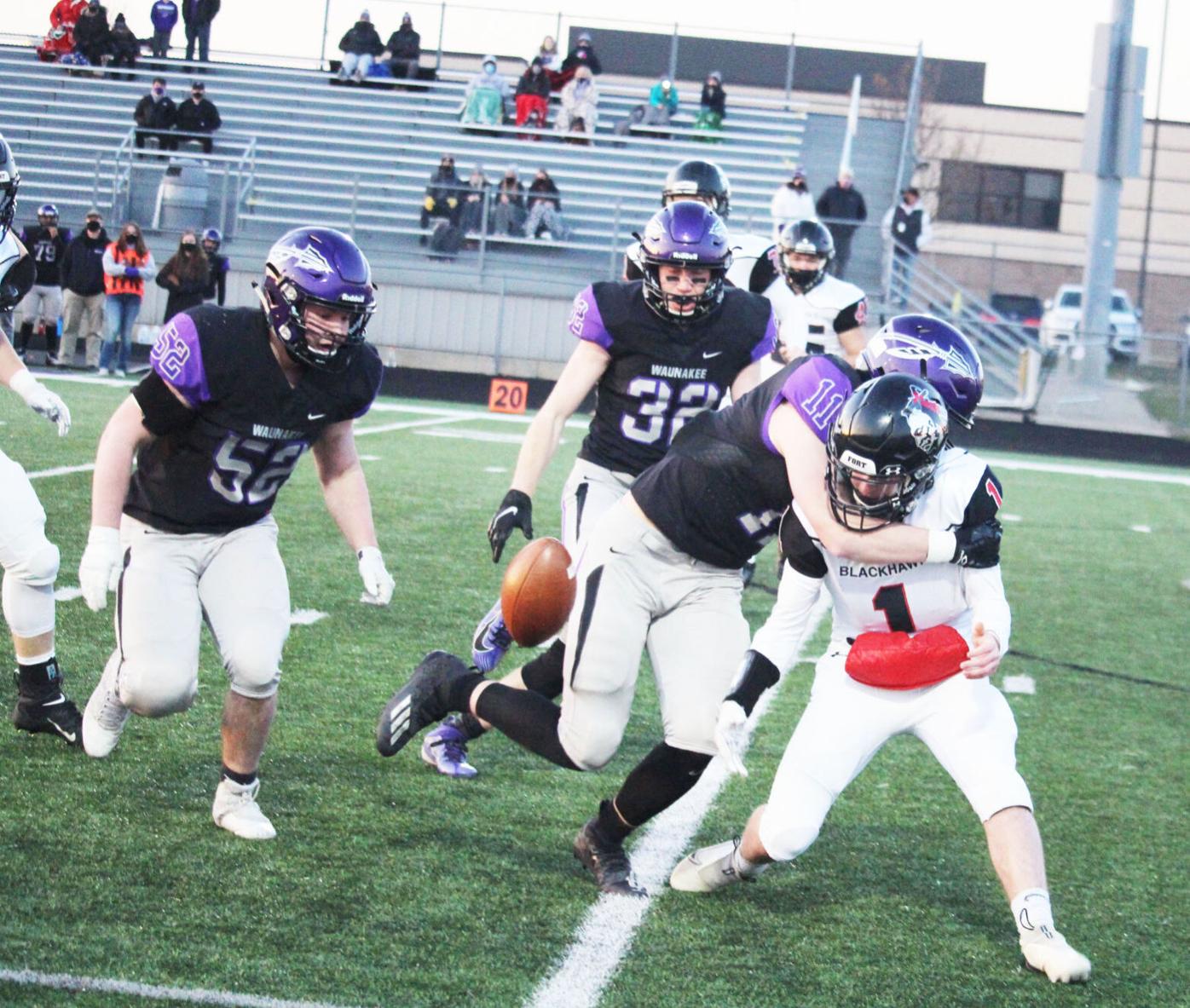 Waunakee’s Kaden Hooker (11) strips the ball from Fort Atkinson quarterback Carson Baker and teammate Cody Bunch (52) comes in to scoop it up. 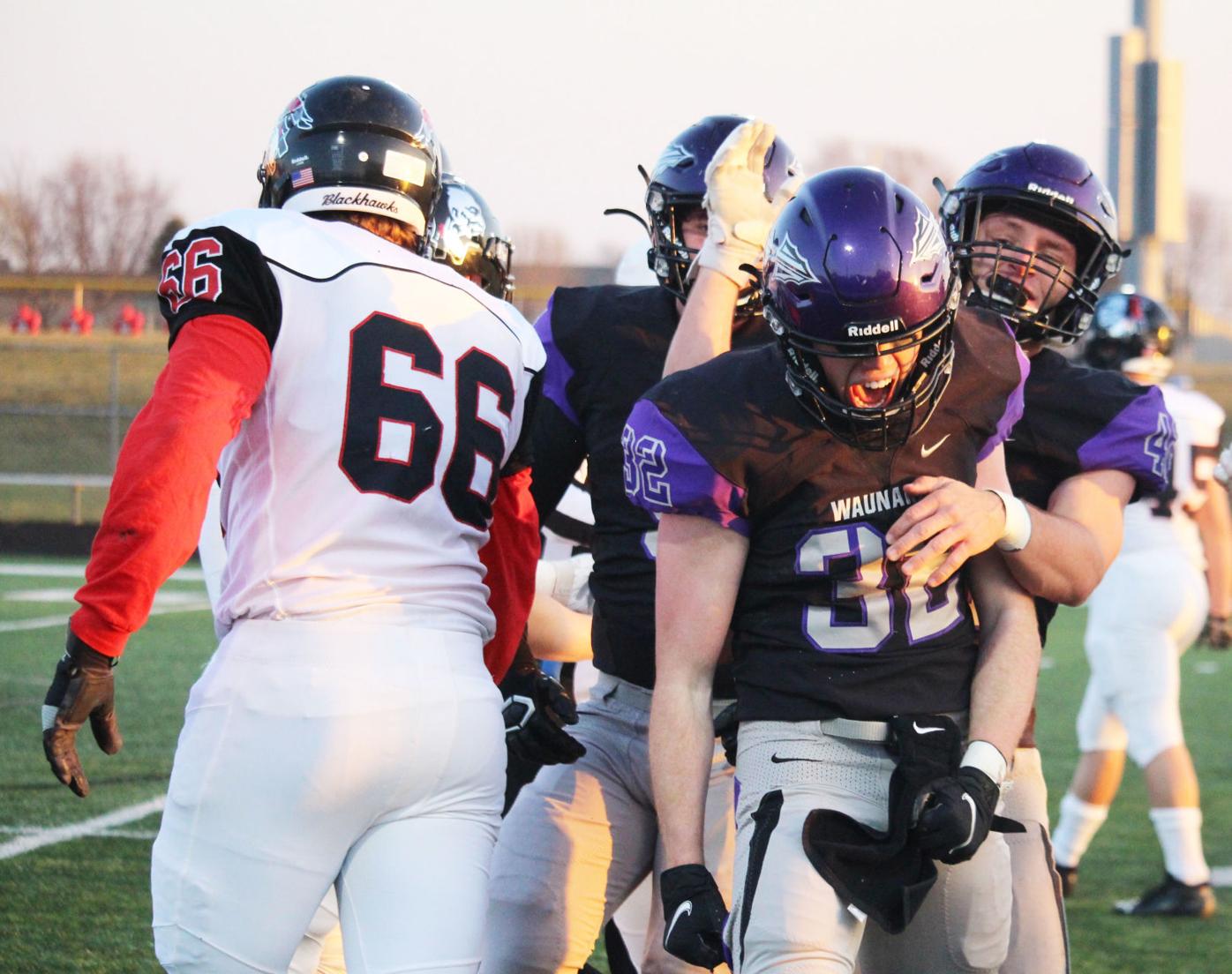 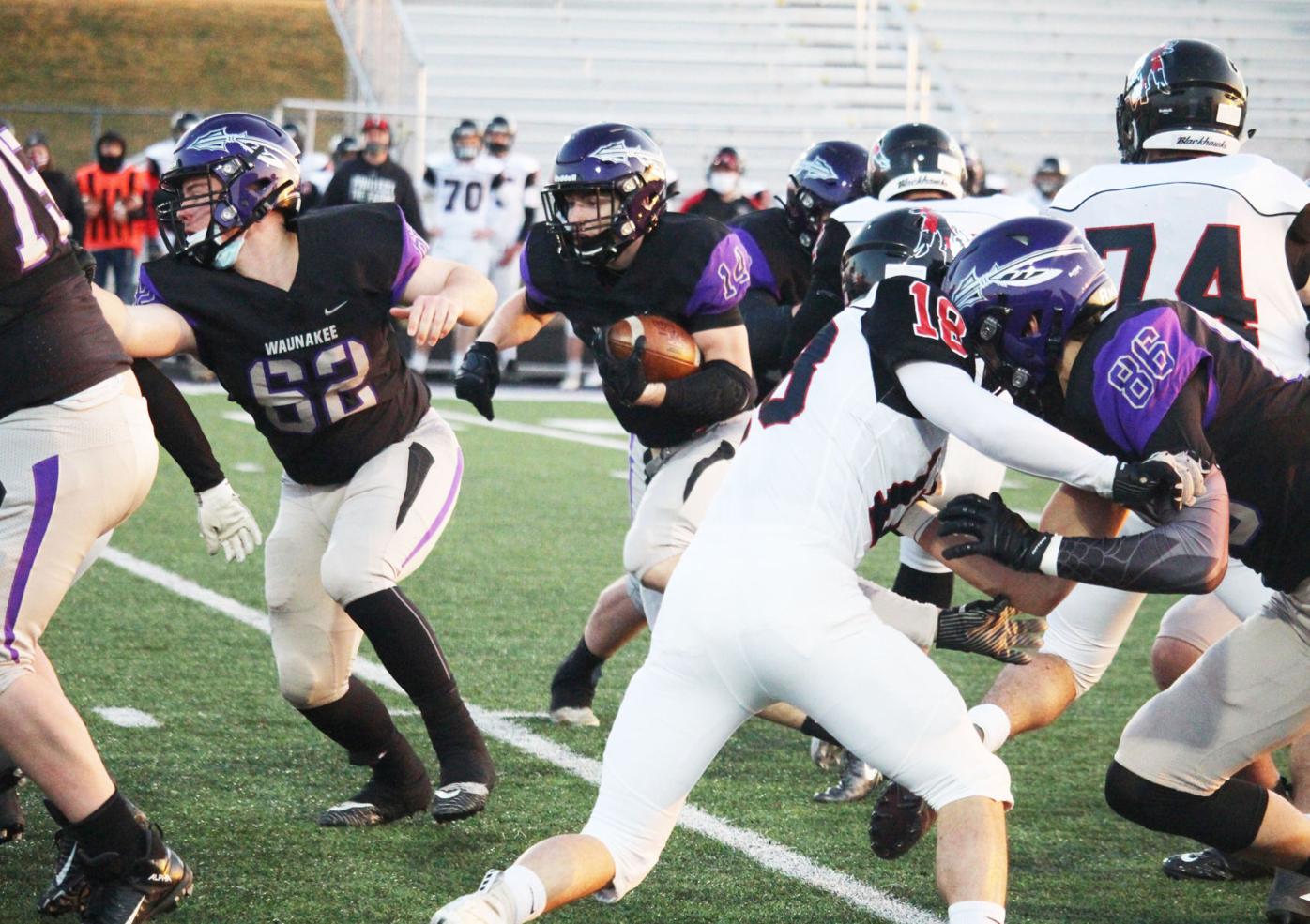 Waunakee running back Caden Nelson looks for a late to run against Fort Atkinson. He finished the game with 45 yards on seven carries.

Waunakee’s Kaden Hooker (11) strips the ball from Fort Atkinson quarterback Carson Baker and teammate Cody Bunch (52) comes in to scoop it up.

Waunakee running back Caden Nelson looks for a late to run against Fort Atkinson. He finished the game with 45 yards on seven carries.

There is a lot that is different with this year’s prep football season, but some things stay the same for Waunakee. The Warriors continued their winning ways during the unprecedented alternate spring season with a 57-0 thrashing of visiting Fort Atkinson on April 1.

It was a historic win for the Warriors, as it was the 300th career win for coach Pat Rice.

“What is really cool is thinking about all the guys I have coached with and all the players who have played for us,” Rice said. “It is hard to articulate. We have had a lot of great kids who have all been a part of this. To have my family here was awesome. I’m just fortunate to be a part of this. It has been a fun ride.”

Waunakee is off to a 2-0 start for the seventh straight season.

The Warriors put together a dominating performance against the Blackhawks.

“We needed to clean things up from Week 1, when we didn’t play that well,” Rice said. “We challenged out guys to step up. I thought we had a cleaner game. The other good thing was that we got to play a lot of different guys. These guys work their tails off and deserve to get on the field.”

Waunakee finished the game with 364 yards of offense and 17 first downs, while limiting Fort Atkinson to 73 yards and seven first downs.

Waunakee scored on its first six possessions of the game and led 43-0 at halftime.

On their first drive of the game, the Warriors got a 14-yard touchdown pass from Quentin Keene to Andrew Keller.

Waunakee then took advantage of a turnover deep in Fort Atkinson territory to set up its second touchdown, a 3-yard scoring run by Caden Nelson.

“Our defense stepped up and made plays,” Rice said.

On their third drive of the game, the Warriors drove 81- yards in nine plays. Michael Gnorski capped off the drive with an 8-yard touchdown run.

Waunakee added the two-point conversion to go up 22-0 with 30 seconds to go in the first quarter.

The Warriors added to the lead on their first play of the fourth drive. Isaac Schaaf caught a 45-yard touchdown pass from Keene.

The lead grew to 36-0 following Keene’s third touchdown pass of the game. He hooked up with Ben Farnsworth on a 26-yard scoring strike with 8:29 left in the first half.

Keene continued his hot night with a 10-yard touchdown pass to Peter James late in the first half.

Fort Atkinson had a chance for some possible points after James Vandermause recovered a fumble with 50 seconds remaining in the first half. But, the Blackhawks ran out of time.

The Warriors put the game away witch touchdowns on their first two drives of the second half.

Adam Ginos opened the scoring in the second half with a 14-yard touchdown run.

Waunakee capped off its scoring with a 10-yard touchdown pass from Cody Nelson to Carter Lory.

Caden Nelson led Waunakee with 45 yards rushing on seven carries, while Keene was 5-of-6 passing for 96 yards and four touchdowns. Nelson was also 5-for-5 passing for 51 yards, while Cody Nelson was 7-of-7 passing for 63 yards.

“We had good balance on offense,” Rice said.

Schaaf led the Warriors’ receivers with five catches for 87 yards and a touchdown.

Trey Kenas, Jake Hogland and Cody Bunch each had a fumble recovery for Waunakee, while Randy Vojtisek had a sack.

The Warriors will be at home again this Friday. They will host Janesville Craig at 7 p.m.