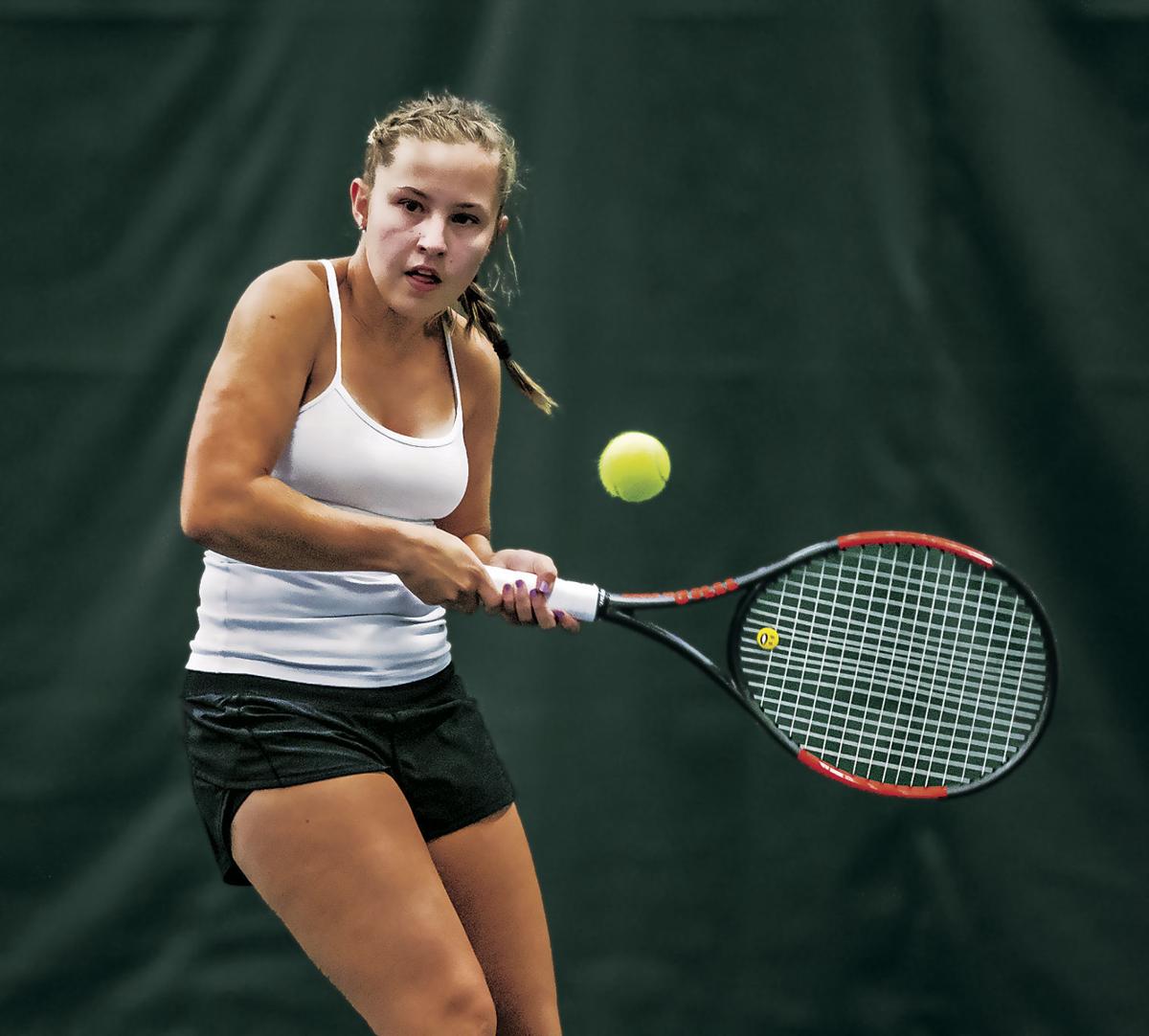 Eliza Endres returns a shot during play on Friday morning at Nielsen Tennis Stadium. Endres and her doubles partner Julia Zabel finished the tournament in fourth place at No. 2 doubles. 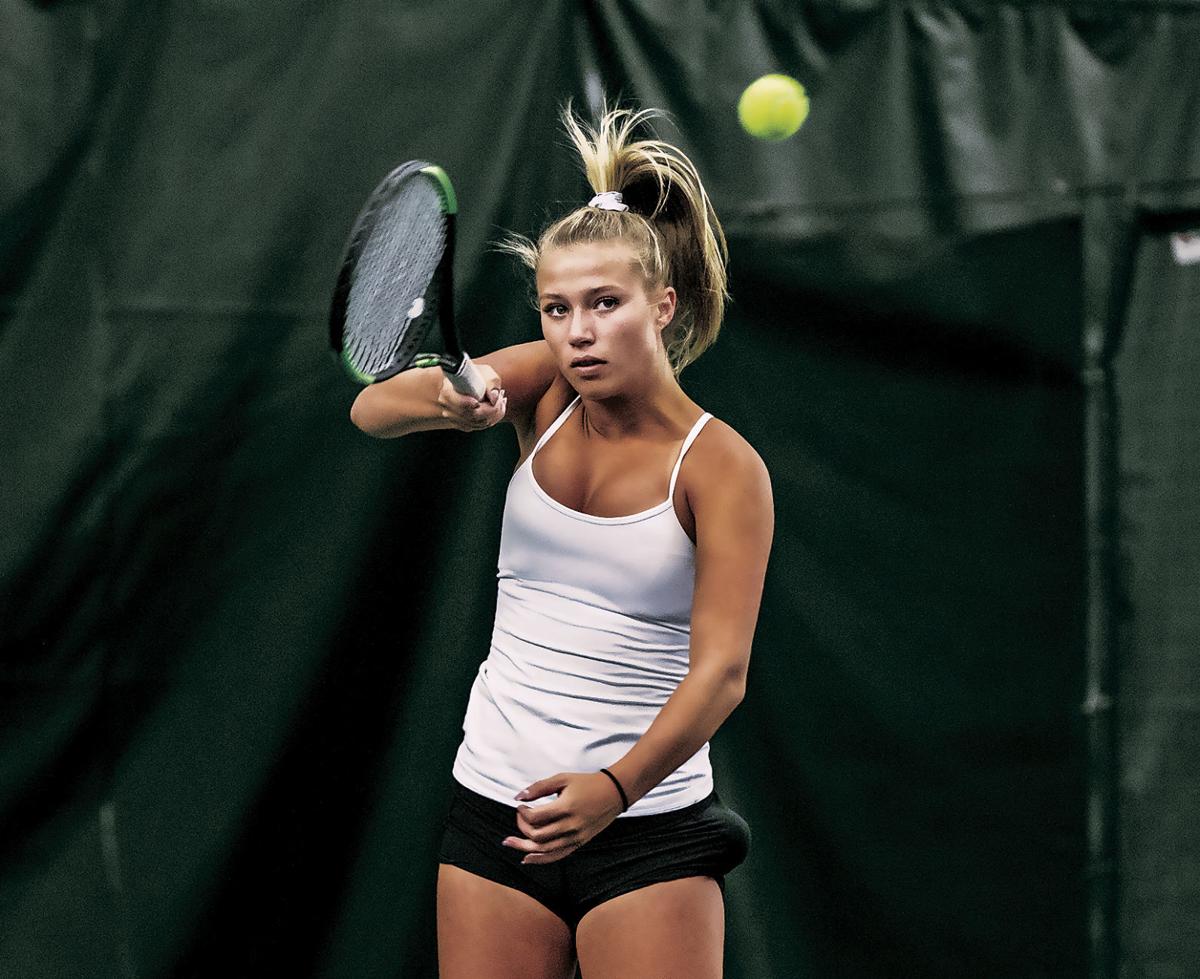 Alexis Loomans fires a shot back on Day 1 of the Badger Conference Tournament. Loomans finished in second place at No. 4 singles: one of three Warrior flights to finish as tournament runners-up.

Eliza Endres returns a shot during play on Friday morning at Nielsen Tennis Stadium. Endres and her doubles partner Julia Zabel finished the tournament in fourth place at No. 2 doubles.

Alexis Loomans fires a shot back on Day 1 of the Badger Conference Tournament. Loomans finished in second place at No. 4 singles: one of three Warrior flights to finish as tournament runners-up.

Heading into the Badger Conference Tournament, the Warriors were firmly in the mix to win the Badger North.

They’d need to score a handful of key wins against Beaver Dam at Nielsen Tennis Stadium, but if they could do so, a Badger North title was well within their reach.

Waunakee’s day started well; the Warriors advanced to the second round via a win – or in the case of Danielle Rogers and Jadyn Statz at No. 3 doubles, a bye – in five of their seven flights.

Each of the five remaining flights still needed one more win in the second round to advance onto Saturday, though. All three doubles teams – along with Loomans at No. 4 singles – secured wins in straight sets.

Larsen battled with another Beaver Dam opponent in her second-round match. After dropping the first set 5-7, she came back to win the second 6-3 and force a third set. As has been an all-too-common theme with the Warriors this year, a close third set ultimately went against Larsen; she fell in the final set by a score of 7-6 (5).

“Losing in third sets this year has unfortunately been our curse this season,” said Waunakee’s Head Coach Chris Nuenthel. “The lesson that we need to take away from this weekend is everyone needs to play their games the entire match and play to win.”

This meant four Waunakee flights and a total of seven players were still in the running to begin the day Saturday.

“I was very pleased to get seven players into the second day for the semis…” added Nuenthel. “Everyone was pretty fired up and ready to go Saturday morning, which is what you want to see when the second day is all the top players in conference.”

Each flight played two matches on Saturday: the outcome of the first determined whether they’d play in the title match or the third-place match.

Three flights scored wins in their semifinal match, with two – Loomans at No. 4 singles and Rogers and Statz at No. 3 doubles – winning in straight sets. Ripp and Sowinski needed three sets, but did pull out a 6-2, 1-6, 6-2 win over Beaver Dam in their semifinal. After a dominant first set, Zabel and Endres couldn’t maintain their momentum and ultimately fell 0-6, 6-1, 7-5 (5).

“We stopped playing to win as we got tentative,” said Nuenthel. “We starting hitting safer shots in hopes our opponent would make mistakes.”

Waunakee’s luck ran out as the day ended; no Warrior flight won their final match of the tournament. With second-place finishes by Ripp and Sowinski at No. 1 doubles, Rogers and Statz at No. 3 doubles and Loomans at No. 4 singles, along with a fourth-place finish by Zabel and Endres, the Warriors racked up a total of 24 points to finish fourth overall in the tournament and second out of Badger North teams. Unfortunately, Beaver Dam was the lone team ahead of them, meaning Waunakee placed second in the Badger North.

“I know we took second in the North and fourth overall, but I still feel like my team was the best or second best team in the entire conference,” Nuenthel said. “We had our chances to prove that to everyone… I also give credit to Beaver Dam for stepping up, especially since they knew we were coming after them.”

The Warriors now set their sights on making a run to state. Their postseason path begins on Monday, when they return to Nielsen Tennis Stadium for their WIAA Subsectional. Start time is scheduled for 9:15 a.m.