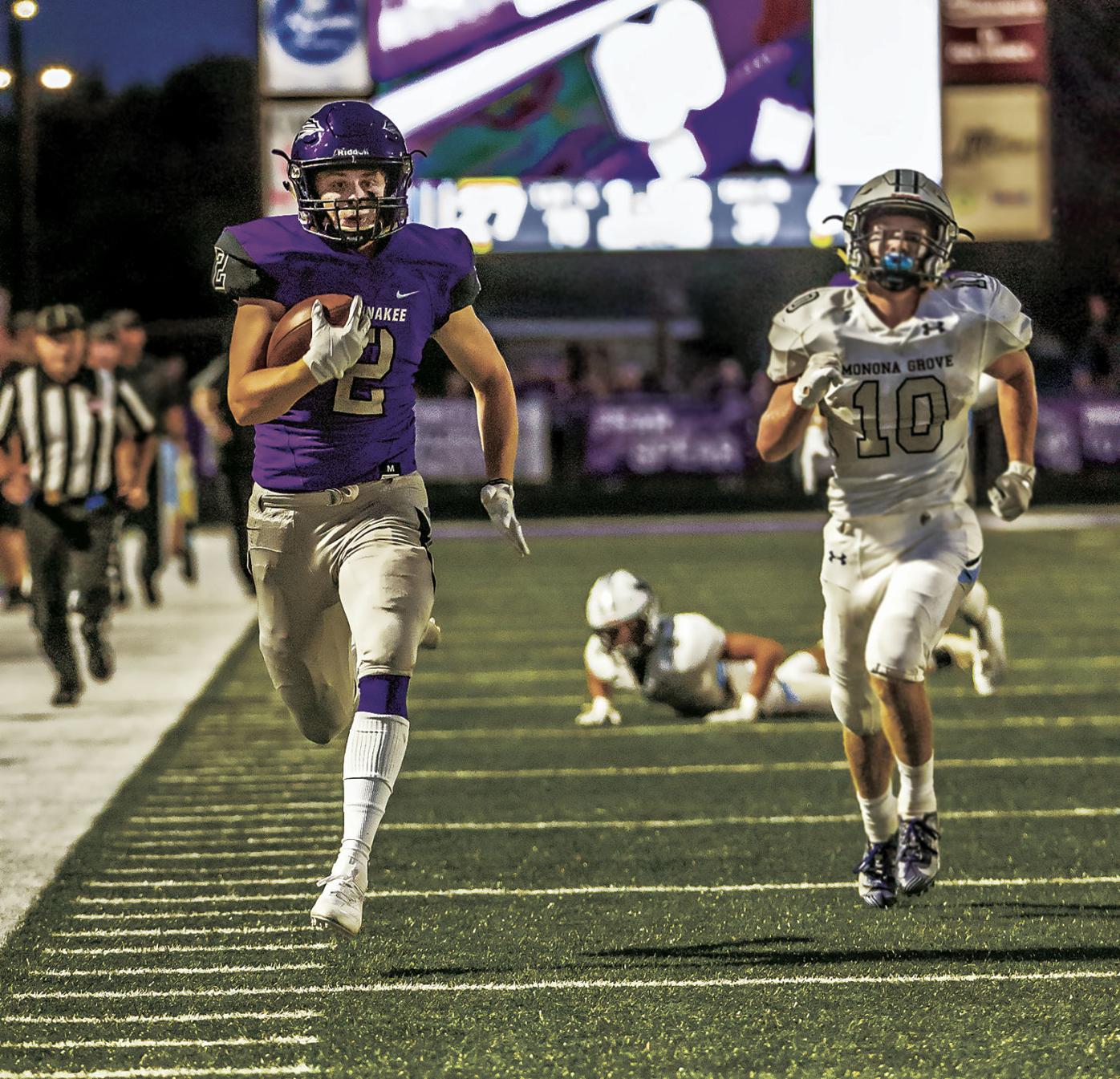 Alec Morgan scampers 61 yards for a touchdown late in the second quarter. Morgan accounted for three rushing touchdowns on the night, all in the first half. 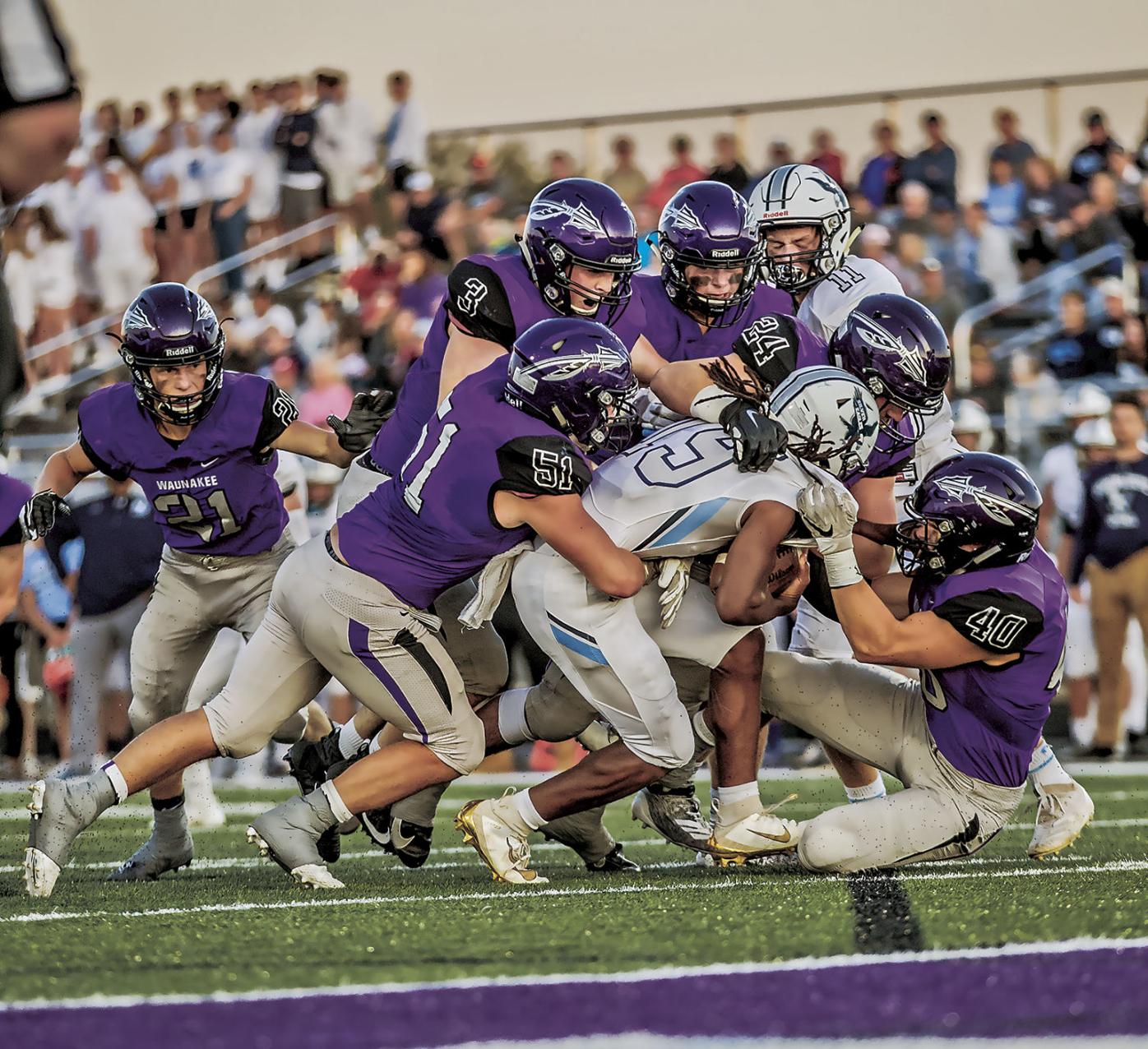 Waunakee's defense takes down a Monona Grove back deep in Silver Eagle territory on Friday night.

Alec Morgan scampers 61 yards for a touchdown late in the second quarter. Morgan accounted for three rushing touchdowns on the night, all in the first half.

Waunakee's defense takes down a Monona Grove back deep in Silver Eagle territory on Friday night.

There were whispers all throughout the summer that the Waunakee football team was hearing footsteps behind them.

The Warriors graduated a ton of talent. The Badger Conference was strong. The season-opening game was a monumental test.

“I don’t hear any footsteps,” Waunakee’s quarterback Caden Nelson said following the Warriors’ 54-6 blowout over the Silver Eagles of Monona Grove. “I think we went out and shut that down.”

Offensively, a dominant performance behind Waunakee’s Hogs led to four first-half scores on the ground for the Warriors.

Up 14-0 after touchdown runs by Nelson and Alec Morgan, a Silver Eagles’ score – one that ended up being their lone touchdown of the night – made it a 14-6 game. For a moment, Monona Grove seemed poised to make Waunakee’s season opener interesting.

Only for a moment, though; Waunakee responded with a 26-point burst in the second quarter to put the Silver Eagles away. When Morgan broke loose for a 61-yard scoring scamper – his third touchdown run of the night – with 1:48 to go until halftime, the Warriors held a 34-6 lead and were in total control.

After the Warrior defense once again stifled Monona Grove’s offense on their ensuing possession, Nelson quickly guided Waunakee’s offense into striking distance. From 45 yards out, he launched a hail mary towards the end zone. With no time remaining on the clock, Caden Lewis outleaped a sea of defenders to come down with his second touchdown reception of the night.

A blocked extra point meant the second half wouldn’t start with a running clock, but it didn’t take long after halftime before the Caden-to-Caden connection struck again for their third touchdown pass of the night, this time from 39 yards out.

“I just put it up there,” added Nelson. “Caden Lewis had those three touchdowns tonight; [he’s a] great athlete making the catches out there for me.”

Waunakee’s defense finished the job from there, stonewalling the Monona Grove offense until the final whistle. The Warriors outgained the Silver Eagles 505 yards to 221, and Sam Lorenz accounted for a pair of interceptions for Waunakee.

Ben Meinholz put the finishing touches on the game for the Warriors, scoring the game’s final touchdown in the third quarter with a 45-yard rumble down the sideline.

“They have a lot of pride…” Waunakee’s Head Coach Pat Rice said of his team. “We heard different things about what we are and what we’re not. We wanted to make sure we stepped out and played a complete game against a really good opponent in Monona Grove… It was a pretty good performance tonight.”