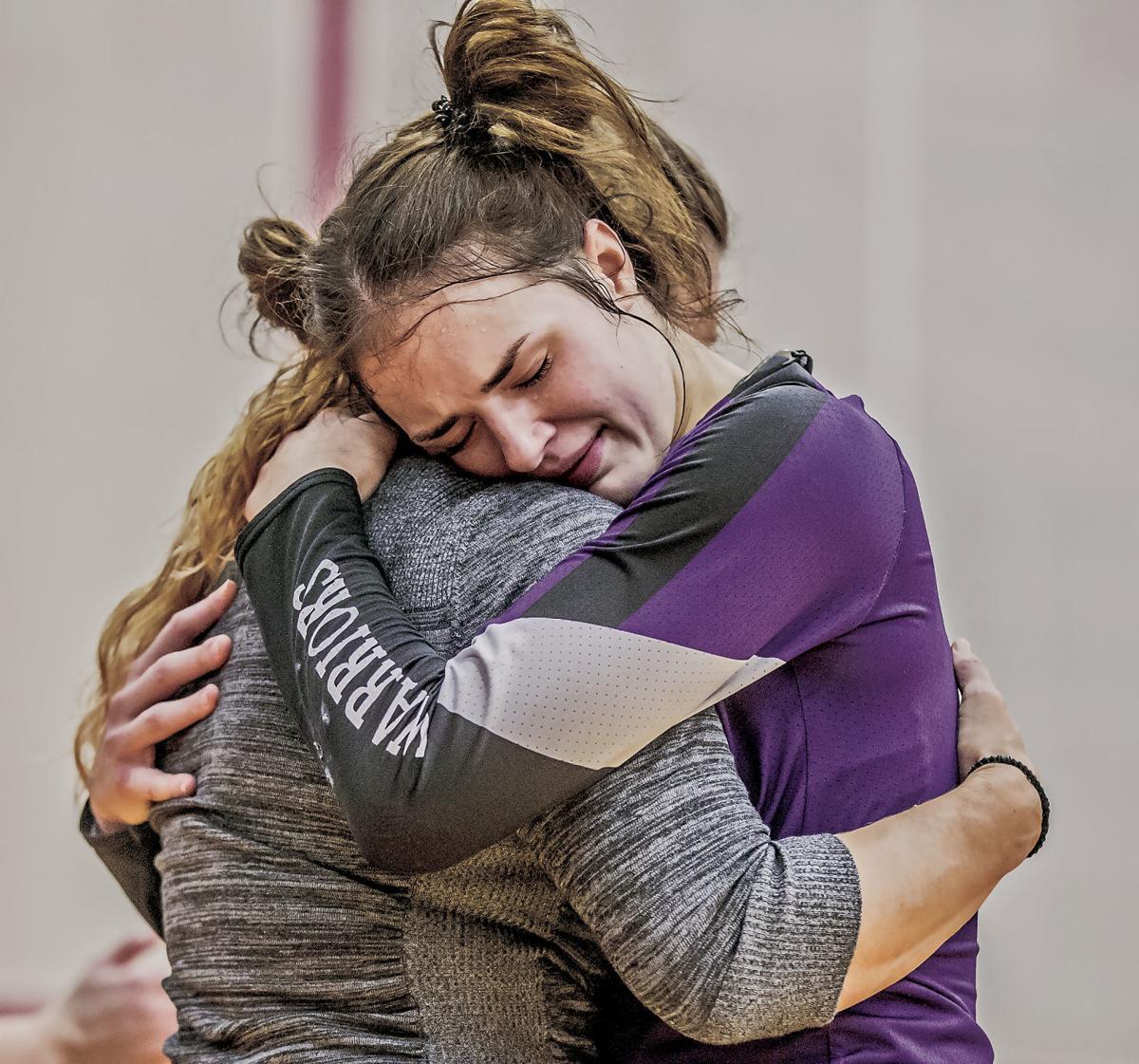 Milla Malk and Anne Denkert share a hug following the final game of Waunakee’s season. Malik led the Warriors with 27 kills in the WIAA Sectional Final defeat against Sun Prairie. 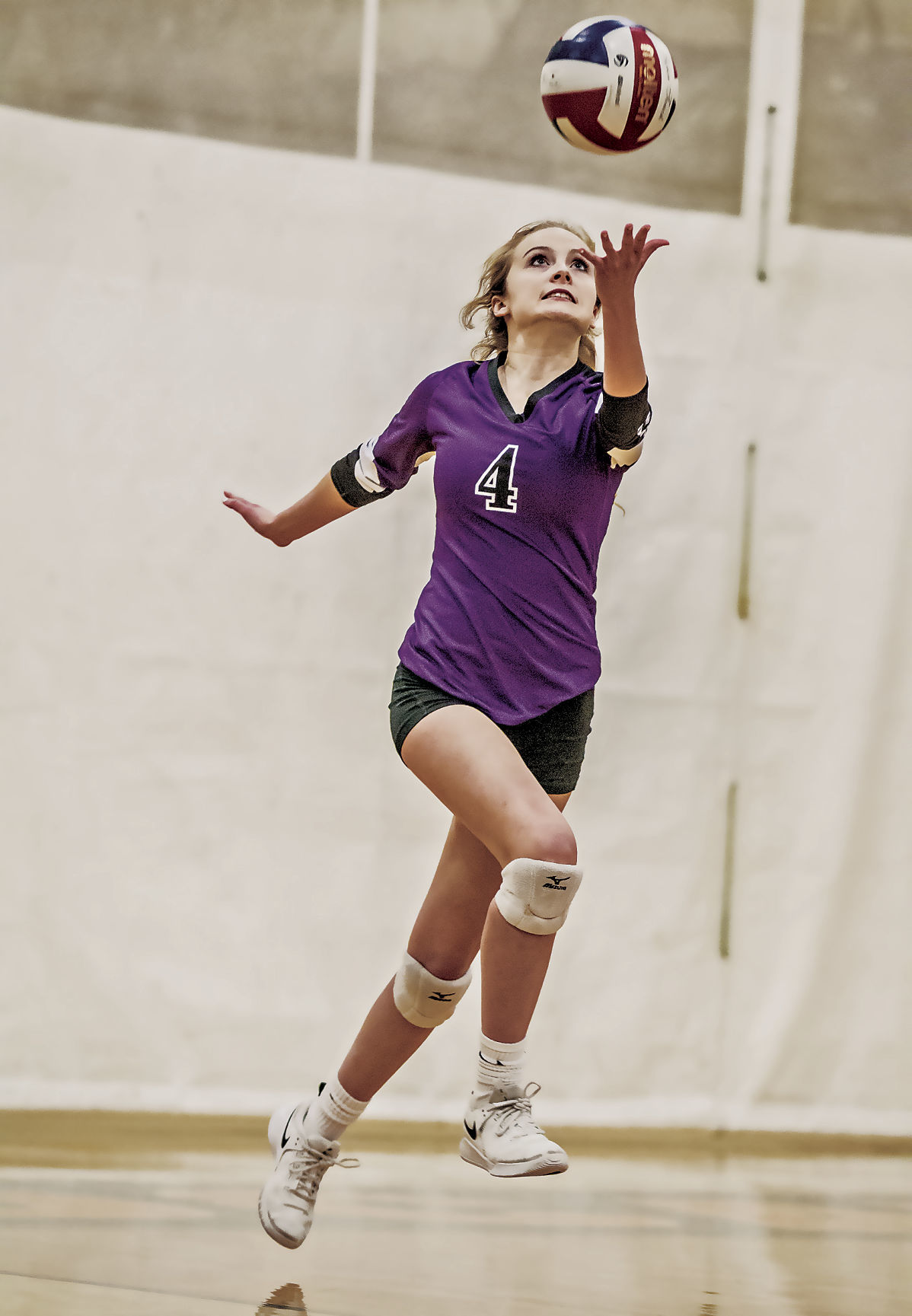 Jordyn Grigg lifts the ball to send a serve over the net during Thursday’s contest against DeForest. Grigg’s four aces — including three during a 6-0 third-set run for the Warriors — were key to Waunakee’s WIAA Sectional Semifinal victory. 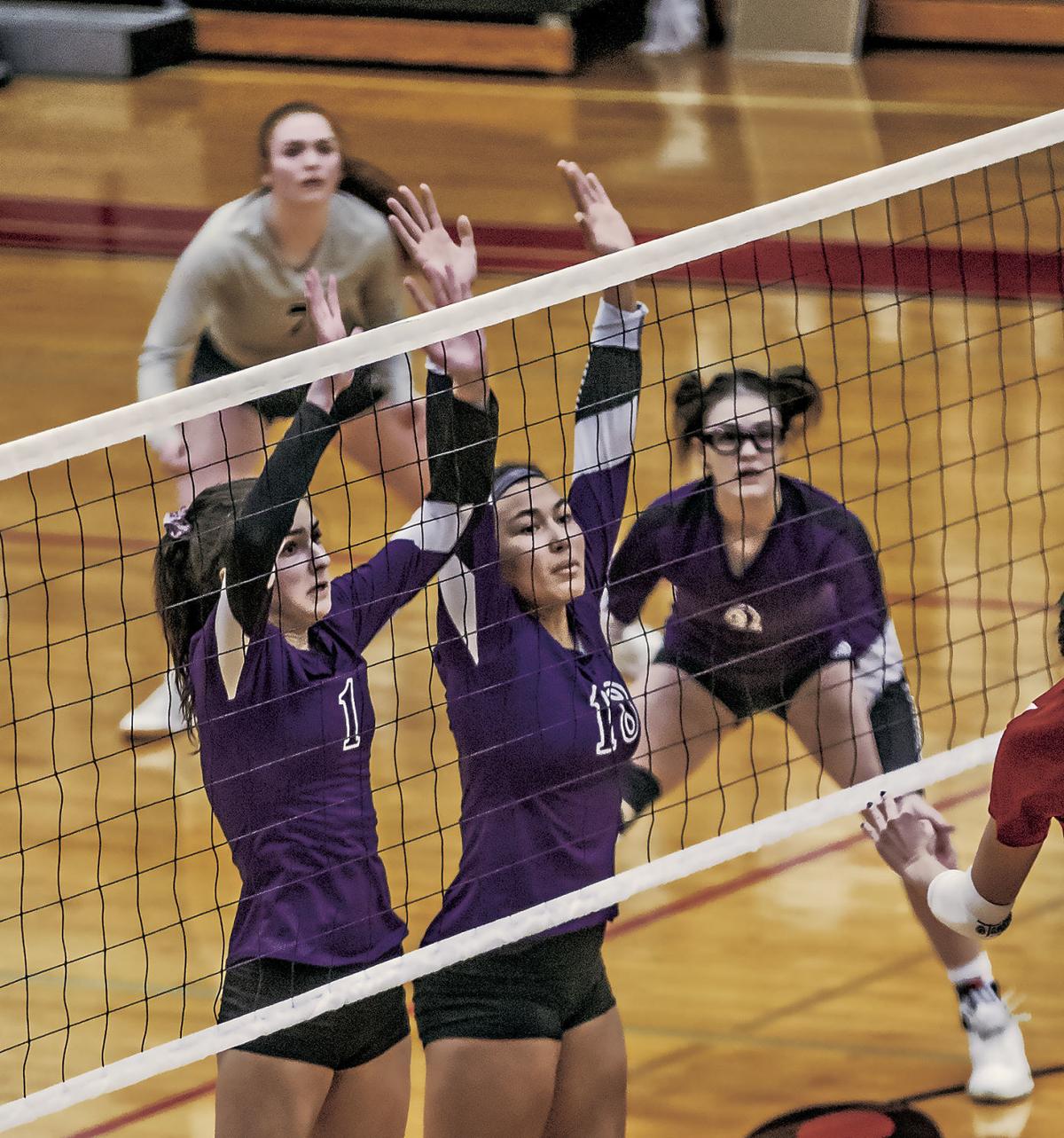 Chloe Larsen and Robyn Ryan rise up to make a block at the net during Waunakee’s contest against Sun Prairie. Larsen posted a team-high six blocks on the night.

Milla Malk and Anne Denkert share a hug following the final game of Waunakee’s season. Malik led the Warriors with 27 kills in the WIAA Sectional Final defeat against Sun Prairie.

Jordyn Grigg lifts the ball to send a serve over the net during Thursday’s contest against DeForest. Grigg’s four aces — including three during a 6-0 third-set run for the Warriors — were key to Waunakee’s WIAA Sectional Semifinal victory.

Chloe Larsen and Robyn Ryan rise up to make a block at the net during Waunakee’s contest against Sun Prairie. Larsen posted a team-high six blocks on the night.

If a high school volleyball team is still in the mix when November rolls around, the stakes are going to be high.

The Waunakee volleyball team played in a pair of postseason games last week; the Warriors defeated conference rival DeForest in their WIAA Sectional Semifinal contest Thursday night before falling at Sun Prairie on Saturday with a trip to state on the line.

The defining moment for the Warriors in their sectional semifinal match came in set number three. Tied at one set apiece, Waunakee found themselves trailing DeForest by a wide margin early in the third: 13-5. Facing a potential 2-1 deficit, Waunakee’s Jordyn Grigg stepped up to serve.

“It’s absolutely huge,” said Waunakee’s setter Sam Miller on the spark Grigg’s serving gave the team. “It gets us a really big momentum swing; after that, the other team gets in their heads a little bit; they start getting down on themselves.”

“We know they are one of the toughest-serving teams that we’ve faced…” added Waunakee’s Head Coach Anne Denkert of DeForest. “Serving tough is really our only recourse for that. They’re serving tough to us; we have to counter with that.”

Now down just 11-13, Waunakee continued to stick around in the third. The Warriors finally took their first lead of the set at 24-23, and won three of the next five points to steal the victory. Milla Malik finished the job for Waunakee, recording back-to-back kills with the score tied 25-25.

In the fourth, DeForest once again built a lead midway through the set, threatening to take the contest into a fifth set. Down 14-17, Grigg stepped up to serve once again. The Waunakee junior recorded her fourth ace of the night as the Warriors turned a 14-17 deficit into a 19-18 lead.

“We’ve all got to keep our heads up; we really motivate each other,” Miller added. “The bench helps out a lot when a good play happens… I don’t think we get very down on ourselves.”

With momentum at their backs, Waunakee took six of the remaining 10 points to take set number four – and the game along with it – 25-21.

While the Warriors got off to a good start against the Norskies – taking a 12-9 lead to open the game – both teams had to quickly adapt to the environment at Verona Area High School. A lower ceiling than either team is typically used to resulted in a pinball-like game on many digs in the first set.

“I felt like we were never really in a good rhythm,” said Denkert. “The ceilings are low, so we’re digging balls and balls are ricocheting all over the place. You have to adjust to the environment.”

Trailing by three points, DeForest proved to adjust a bit faster than the Warriors and ripped off a 4 to 16 run to take the first set 25-17.

Though the Warriors never recorded any big run in the second, they never allowed the Norskies to build any momentum, either. With the score tied at 11, Waunakee gradually built a lead as the set wore on, ultimately taking set number two by a score of 25-20 to bring the game to its defining third set.

Malik led the Warriors in kills with 20, while Jocelyn Meinholz recorded 20 digs. Miller racked up 19 aces, and Grigg’s four aces paced Waunakee on the night. Chloe Larsen’s five blocks were best on the team.

Waunakee then had just two days to prepare for their WIAA Sectional Final contest against Sun Prairie.

“That’s not our best volleyball; I’ve seen us play better than that…” said Denkert. “Now it’s going to be a quick turnaround for Saturday. I think they’ll look at the film and go, ‘We’re a better team than this, so we’ve got to play better than this if we want a chance.’”

Needing to get off to a better start than they had two days earlier against DeForest, the Warriors opened the game on a 9-3 run, forcing the Cardinals to take an early timeout.

Waunakee still had a six-point lead later in the set, when Sun Prairie took their second timeout with the score showing 18-12. A 9-3 Cardinal run following the timeout quickly evened the score at 21, however, and the set was suddenly anyone’s to win.

After Sun Prairie’s ensuing serve fell short, a Grigg ace put the Warriors up by two. The remainder of the set belonged to Sun Prairie; the Cardinals scored five of the remaining six points to take a 1-0 lead into set number two.

After an 0-3 start to begin the second set, Waunakee went on an 8-0 run – highlighted by a pair of Miller aces – to once again take control early. The Cardinals chipped away as the set wore on, ultimately re-taking the lead at 15-14.

Things began to look dire for the Warriors when Sun Prairie took a 23-20 lead, needing just two points to put Waunakee into a two-set hole. The Warriors were able to lean on Malik to bring them out of the tough situation; back-to-back kills from the senior outside hitter gave the team the spark they needed, and Waunakee was able to close out the set on a 5-0 run to even the score 1-1.

Set number three was defined by the pendulum of momentum swinging wildly back and forth.

Holding a 9-8 lead, the pendulum first swung in Waunakee’s favor by virtue of an 8-4 run. It was then Sun Prairie’s turn to seize momentum; the Cardinals ripped off a 6-1 run of their own to tie up the score at 18.

A Meinholz kill swung the pendulum back in Waunakee’s favor; the Warriors went 5-1 on the next six points to go up 23-19. On the brink of going down 2-1, Sun Prairie had one more burst in them; each of the next five points went the Cardinals’ way, and suddenly Sun Prairie had a 24-23 lead.

The next three points were an all-around display of Waunakee’s abilities. The Warriors tied the set at 24 on a Malik kill, took a 25-24 lead on a Larsen block, and claimed a 2-1 lead on a set-clinching Meinholz ace.

Early in set number four, neither side could gain an early advantage. With Waunakee leading 10-9, Sun Prairie went on the first real run of the set, going 5-1 to take a four-point lead.

An 8-2 Waunakee run followed, and the Warriors were once again on top 19-17. If Waunakee could find way to win six of the remaining 12 points, they’d earn their a ticket to state.

One more time, however, the momentum swung in Sun Prairie’s favor. A 7-2 Cardinal run made it a 24-21 score. Two straight Warrior points brought the set as close as 24-23, but Waunakee fell just short of completing the comeback when their next serve landed out of bounds, giving the Cardinals a 25-23 win in set number four.

“This exactly what you want a sectional final to be like; it should be a battle like this,” said Denkert. “This is fully what we anticipated.”

In the deciding fifth set, Waunakee had the slight early advantage, maintaining two-point leads at 2-0, 3-1, 4-2, 5-3 and 6-4. The Cardinals refused to allow Waunakee to pull away; they managed to tie the score at 7-7 and then again at 8-8.

“I told them to keep their heads up; they should be very, very proud of themselves,” said Denkert of her team. “That was a great battle. You can’t ask anything more out of them. You really can’t.”

Malik led the team with 27 kills on the night, while Meinholz recorded a team-high seven aces. Larsen racked up six blocks, and Hayley Krysinski tallied 28 digs. Setting up her teammates all night, Miller recorded 30 assists.

“We were in it together; we fought together,” said Denkert. “It just sucks.”

Waunakee’s final record stands at 41-8, including an unblemished mark in the Badger North and multiple tournament victories.

“There’s so much to be proud of,” Denkert added. “There were no selfish players on this team: none. They were about the team from the beginning to the very end.”