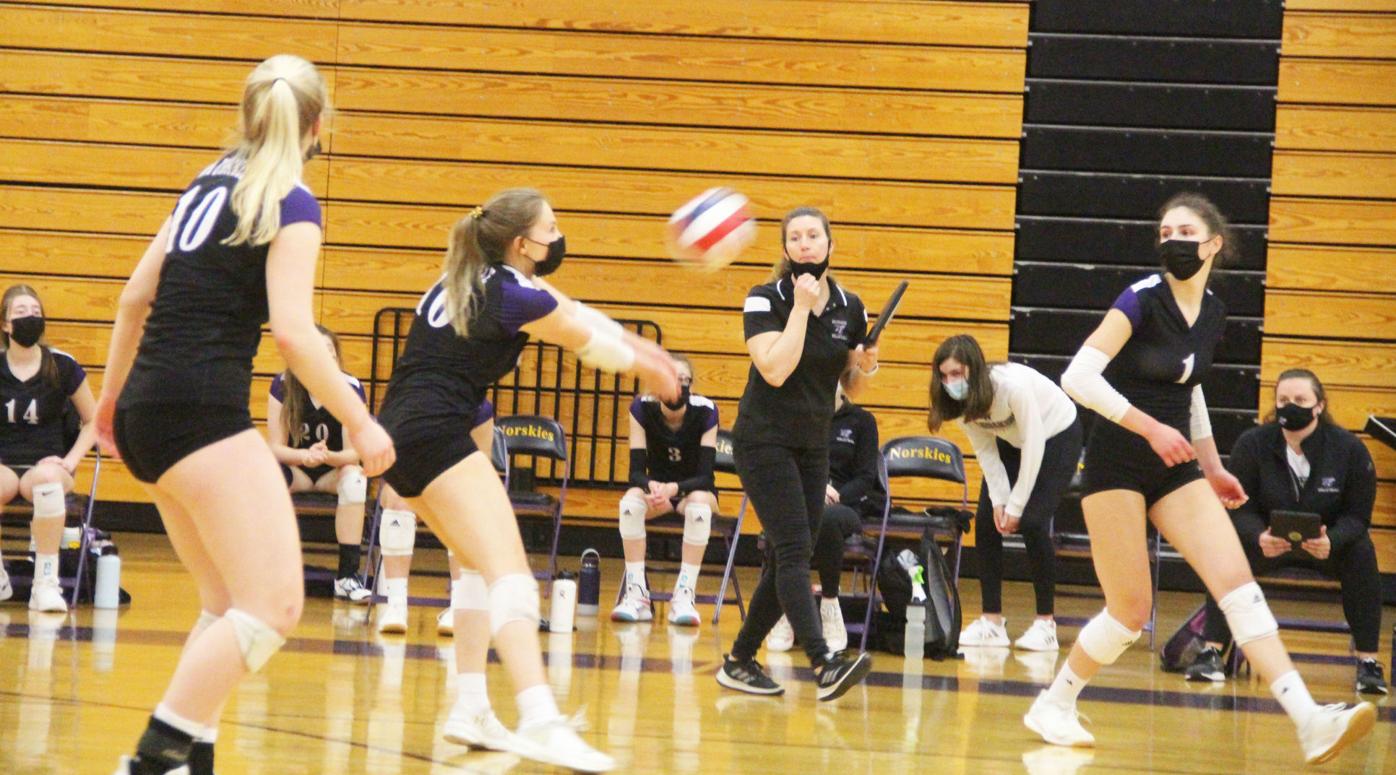 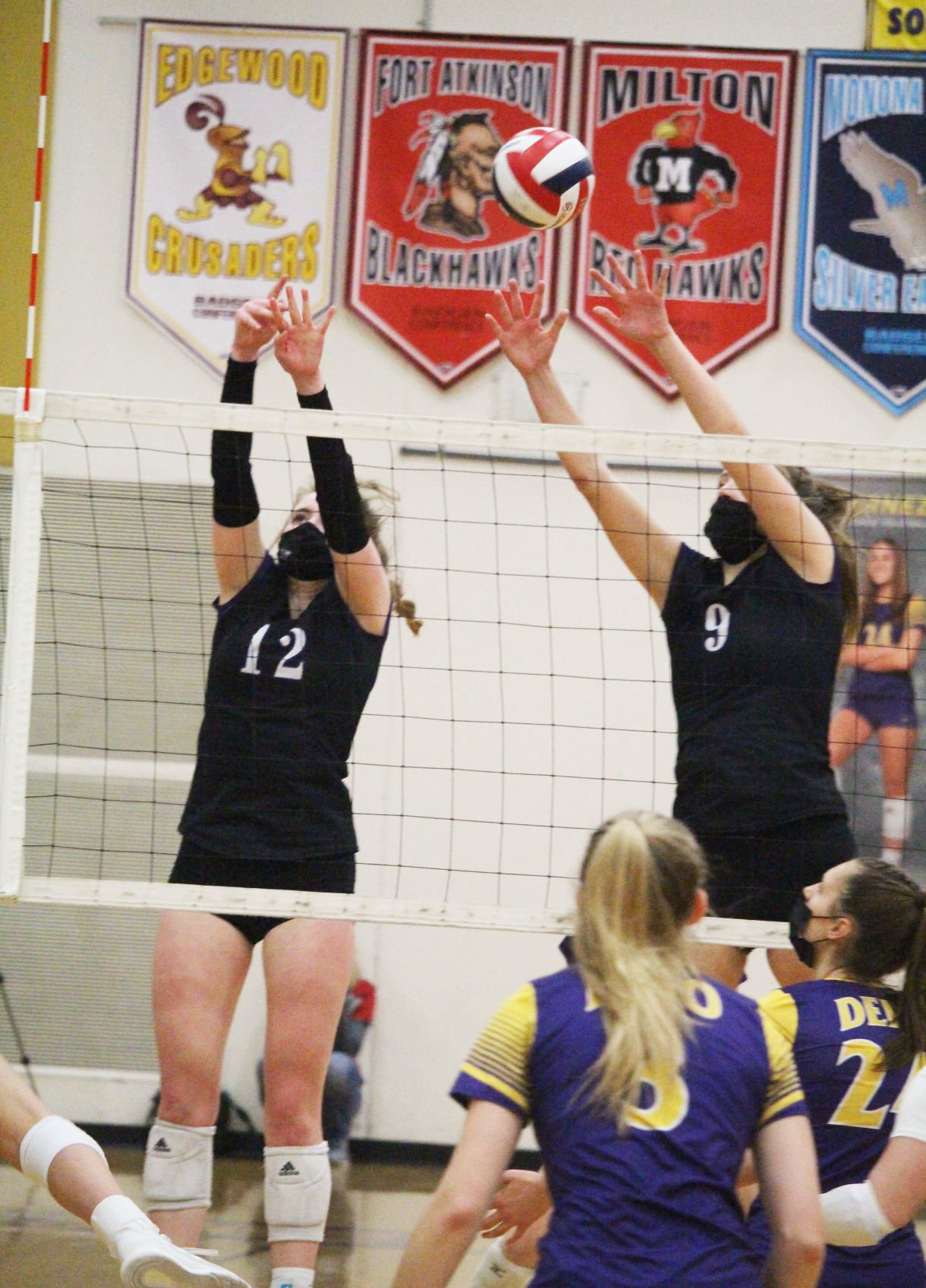 The Lady Warriors’ Mariah Best and Kaitlin Jordan go up for a block against DeForest. 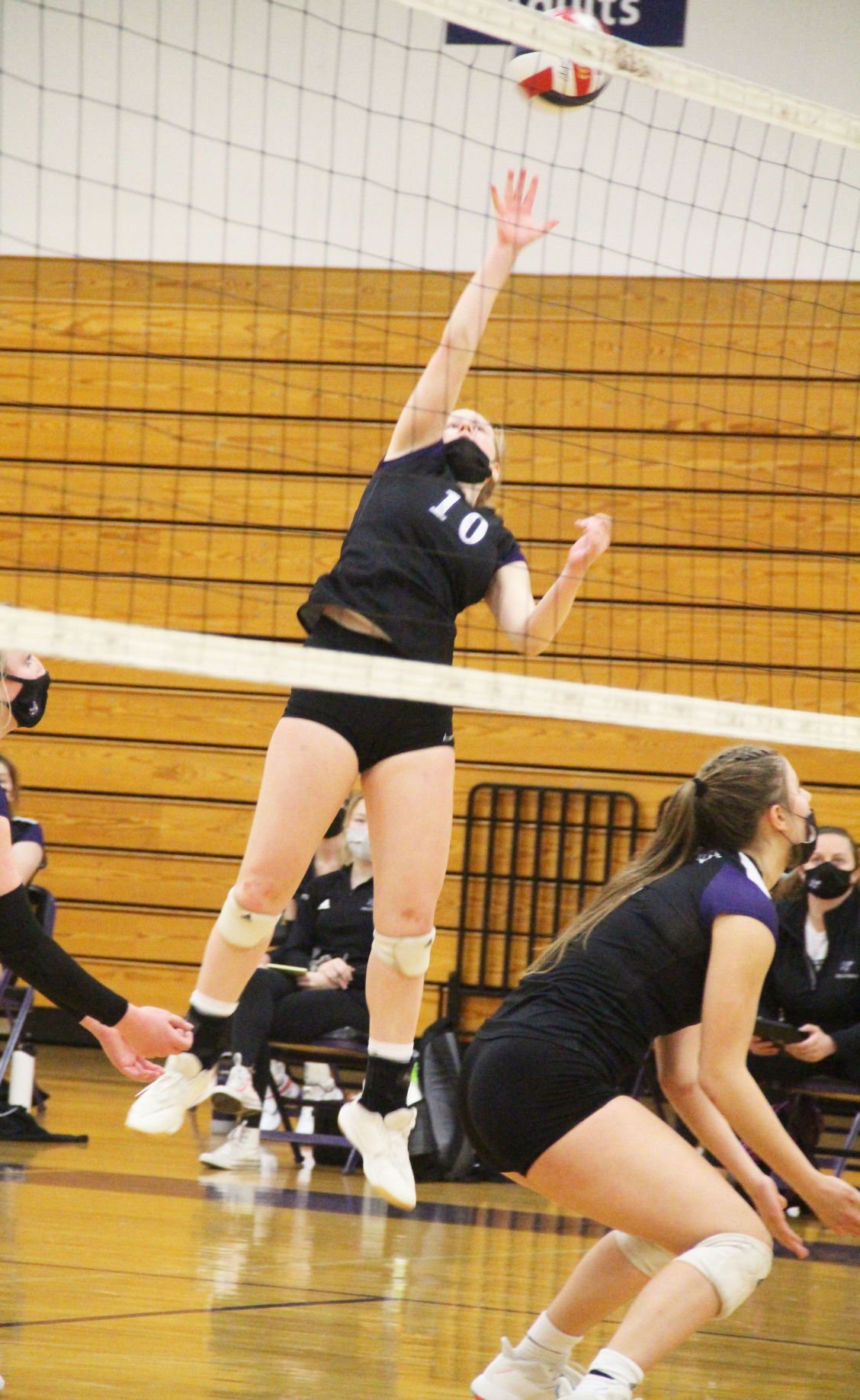 Waunakee’s Grace Pierner goes up for a spike in the regional final.

The Lady Warriors’ Mariah Best and Kaitlin Jordan go up for a block against DeForest.

Waunakee’s Grace Pierner goes up for a spike in the regional final.

The Waunakee prep volleyball team had a busy ending to the abbreviated alternate spring season last week. The Warriors closed out the regular season with a pair of matches and then competed in the WIAA Division 1 DeForest Regional.

The Lady Warriors had a great ending to the regular season with wins over Monroe and Monona Grove.

On April 6, the host Warriors shut out Monroe 3-0.

Waunakee followed it up with another 3-0 victory over host Monona Grove on April 8.

The Warriors put it all on the line at the regional last Saturday. In the opening round, they scored a thrilling 3-2 victory over Middleton.

“We had not gone five sets with anybody this season and then we had to turn around and play again,” Waunakee coach Anne Denkert said. “That is a lot for the girls. I was trying to get them some breaks to catch their breath, but it was tough. This is a very different format. You don’t ever play a five-set match and then play again right away. Even in tournaments, you only play three games.”

The regional final was just as competitive, but Waunakee was not able to conjure up the same magic in a 3-1 loss to host DeForest.

“We played with so much heart. I can’t say enough about my team, especially my nine seniors,” Denkert said. “It is super easy to say it was fatigue, but I don’t think it was. We got into some problems with our serve receive and couldn’t execute as well as we wanted to. We had a good strategy and followed it pretty well. DeForest was fresh and it showed, because we just got done playing five games. I’m not using it as an excuse, but they had fresh legs. We gave everything we had.”

“The girls have worked hard and have nothing to hang their heads about,” Denkert said. “I know it was not the outcome we wanted, but I’m proud of my team. It was a weird season, but we are so glad we got to play.”

The win over Monroe came a week after the Warriors suffered just their second loss of the season to DeForest.

The Warriors bounced back from the loss in a big way, as they dominated all three games against the Cheesemakers.

Waunakee set the tone for the night with a 25-15 win in the first game.

The Lady Warriors had everything go their way in Game 2 and they garnered a 25-8 victory.

The Warriors completed the sweep with a 25-21 decision in Game 3.

Grace Pierner and Kaitlin Jordan both had four kills for the Warriors. Pierner also had a team-high four service aces.

Mariah Best concluded the night with 16 assists for Waunakee, while Jordyn Grigg led the defense with nine digs.

The Lady Warriors had little trouble putting away Monona Grove in the regular-season finale. They won all three games by at least 12 points.

Waunakee put the pressure on right away and cruised to a 25-12 win in Game 1.

The Warriors captured 25-13 wins in the final two games of the night.

Chloe Larsen and Jordan paced Waunakee with 10 kills each.

Best finished the match with 28 assists, while Grigg had five aces. Robyn Ryan came away with two blocks.

The Warriors had a lot of momentum after winning the first two games against Middleton, but the Cardinals battled back to force a decisive Game 5.

Waunakee opened the regional by extending its game win streak to seven with a 25-17 showing in Game 1.

The streak was extended to eight after a 25-16 victory in the second game.

Momentum started to shift after the Cardinals scratched and clawed their way to a 26-24 win in Game 3.

Middleton continued to gain momentum after thwarting the Warriors 25-15 in Game 4.

With the season on the line, Waunakee captured a 15-8 win in Game 5.

Larsen led the charge for Waunakee with 12 kills and five aces, while Best had 30 assists and 14 digs.

Ryan and Claire Holden both had six blocks for the Lady Warriors.

The Lady Warriors were looking for some revenge against the Norskies, who won their regular-season meeting 3-0.

Waunakee had a touch start to the night, as DeForest jumped out to a 5-1 lead in the first game on its way to a 25-12 win.

The Warriors also fell behind early in the second game, but this time they were able to battle their way back.

DeForest led by as many as five in the second game, but Waunakee rallied for a 27-25 victory.

The Lady Norskies grabbed momentum back in Game 3. They easily knocked off the Warriors 25-11.

Waunakee jumped out to a 9-3 lead in Game 4, but were unable to hold on.

DeForest used a late push to win the fourth game 28-26.

Larsen finished the match with eight kills, while Best had 18 assists and two aces.

Grigg came away with a team-high nine digs.