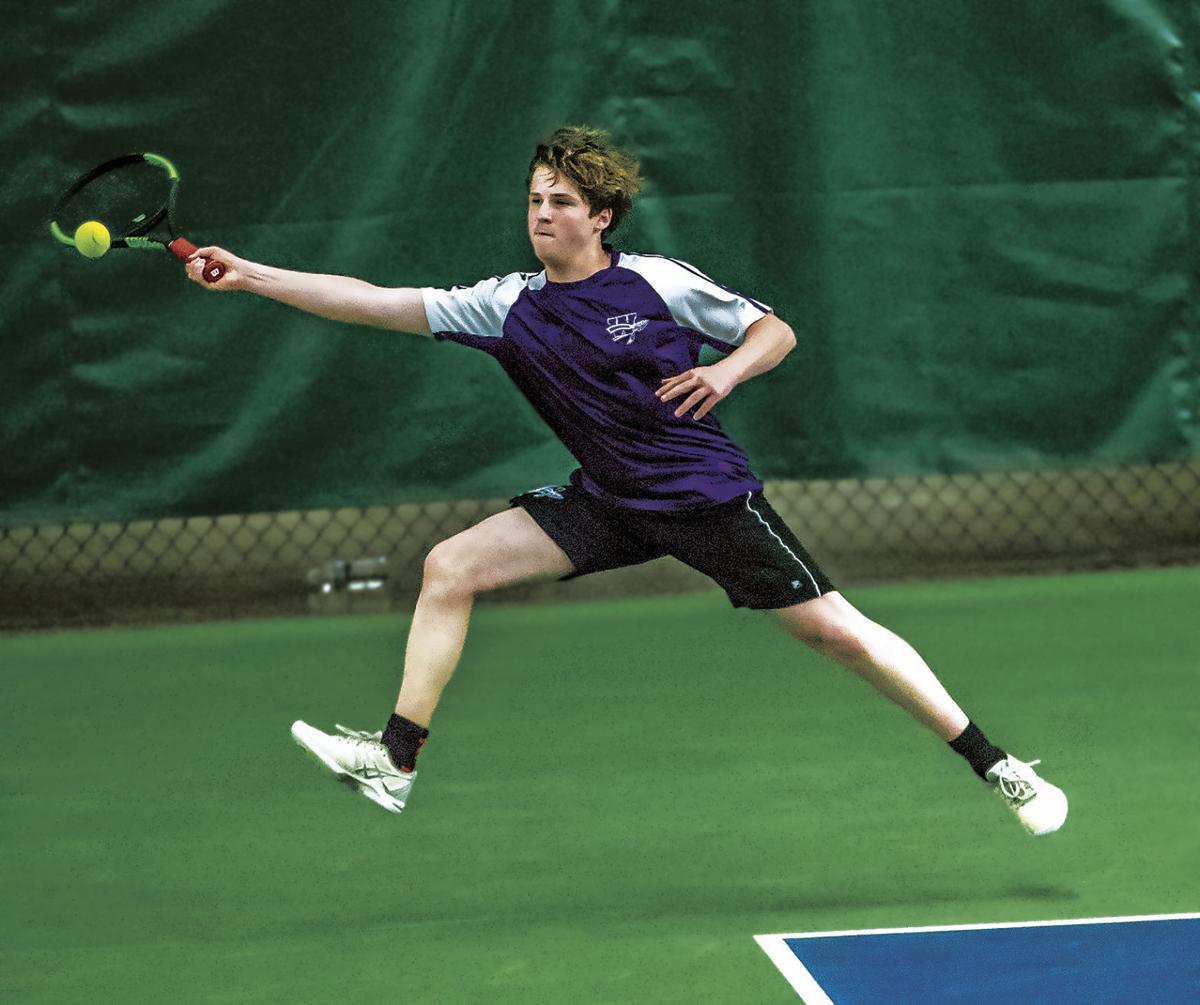 Shane Paradisin extends to return a shot during Waunakee’s first-round match against Marquette. Paradisin and Max Christian won a tight contest in the first round 5-7, 7-5, 10-7. 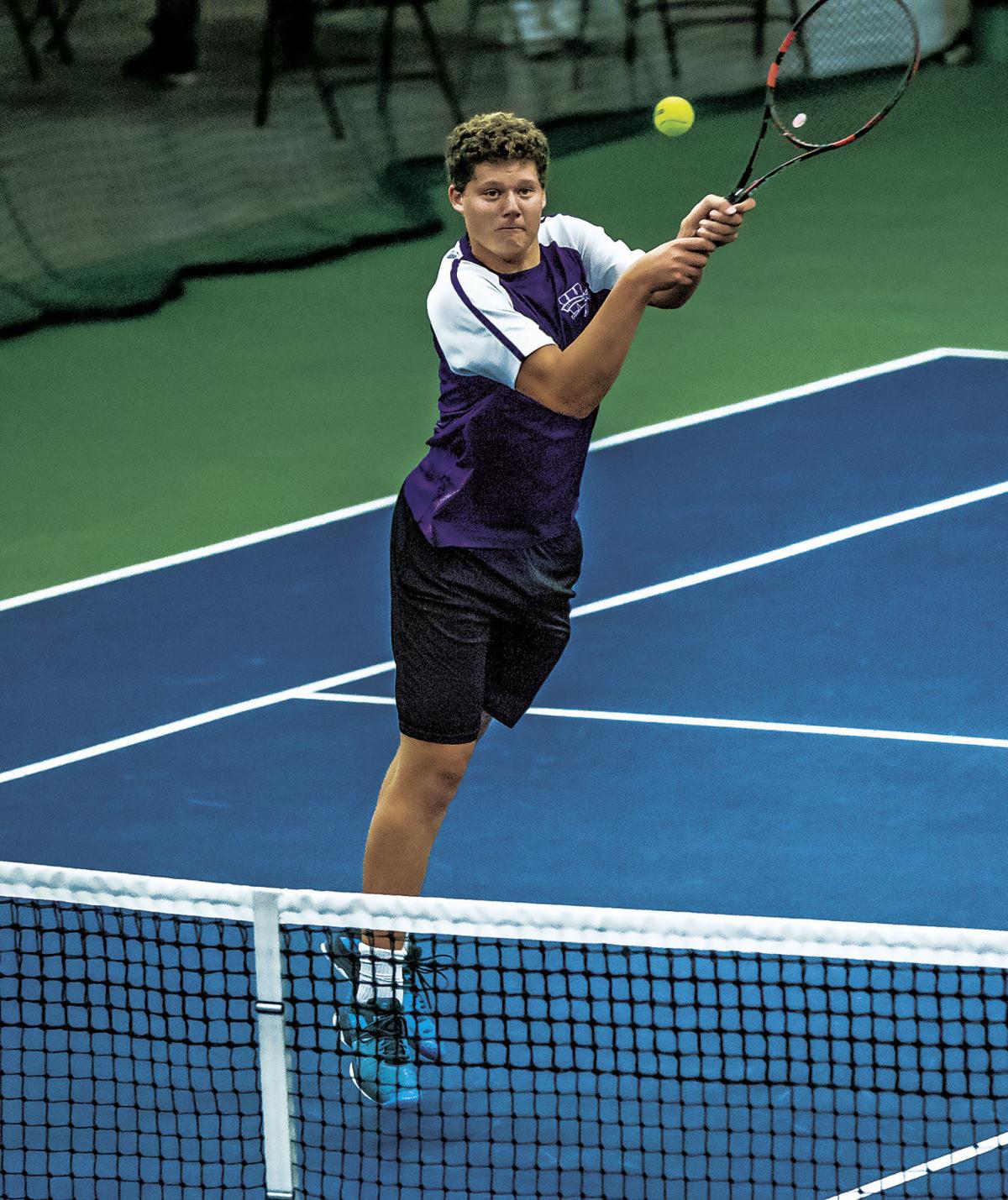 Max Christian sends a backhand volley over the net during Waunakee’s first-round match against Marquette.

Shane Paradisin extends to return a shot during Waunakee’s first-round match against Marquette. Paradisin and Max Christian won a tight contest in the first round 5-7, 7-5, 10-7.

Max Christian sends a backhand volley over the net during Waunakee’s first-round match against Marquette.

With both their No. 1 singles and No. 1 doubles competing in the WIAA State Tournament, the Waunakee boys’ tennis team was well-represented at Neilsen Tennis Stadium last weekend.

Neither Tyler Nelson at singles nor Max Christian and Shane Paradisin at doubles were satisfied with going one-and-done, though. Each fought their way to score opening-round wins.

Nelson was up first, playing in the opening 10:30 slate of matches.

Seeded ninth, Nelson’s draw in the first round was Andrej Ro’ger Grecmal of Ashwaubenon, who sported a 10-0 record.

The two battled early, but Nelson gradually pulled away in the first set, winning 6-3. Having figured his opponent out in the first, Nelson’s second set was a bit more dominant; the Waunakee freshman won the second set 6-1 to advance onto the second round.

Christian and Paradisin had to wait until the afternoon for their opening-round match against Marquette’s Logan Homberg and Evan Roge.

In one of the tournament’s closest contests, momentum swings defined the match. Waunakee’s duo had a hot start and went up 4-1 initially, but Marquette stormed back to take the first set 7-5.

“It was really tough to go on a five-game losing streak,” said Christian. “But we stayed strong.”

Both teams battled back and forth in the second set, with Homberg and Roge up 5-4 at one point with an opportunity to close out the match.

“It’s really all about your head out there, what you tell yourself,” said Paradisin. “You can’t get down on yourself, otherwise you’ll pretty much guarantee you’re going to lose.”

Needing to pull out the set to send the match into a tiebreaker, Christian and Paradisin did exactly that, winning three straight games to take the second set 7-5.

Carrying momentum from the end of the second set, Waunakee’s pair never let Marquette get on a roll in the tiebreaker. Christian and Paradisin slowly gained an advantage and ultimately closed out Homberg and Roge 10-7 in the tiebreaker.

“Keep your head up...” Christian said of what carried them through. “You’ve got to stay positive – both of you – or else it’s not going to happen.”

Christian and Paradisin’s match was their only one of the day, but Nelson had one more in order to advance onto Friday.

Nelson played against La Follette’s Tyger Yang in the second round. Yang had the early advantage against Nelson, jumping out to a 6-1 victory in the match’s first set.

With a fight on his hands, Nelson had a small margin for error to pull off the comeback. He took the second set 7-5, forcing a decisive third set.

Yang recovered from the lost set, however, winning the third set 6-3 to put an end to Nelson’s tournament.

Nelson’s season ends with a 24-3 record that includes the No. 1 singles Badger Conference Title.

On Friday, Christian and Paradisin had a tough draw. In their second-round matchup, they went against the tournament’s fourth-seeded Ben Fredeen and Michael Vivian of Green Bay Southwest.

Christian and Paradisin kept it close in the first set, but a fresh Fredeen and Vivian – who earned a bye in the first round – managed to pull off a 6-4 win. With the first set in hand, Green Bay Southwest cruised in the second, winning 6-1 to take the match.

Fredeen and Vivian wound up taking third place in the tournament, losing only to the eventual champions from Nicolet.

Christian and Paradisin end their season with a 21-8 record overall.

Waunakee’s lineup should be strong once again in 2020. Though their most experienced player – Max Christian – graduates, they’ll return the majority of their lineup; three of their four singles players and five of six doubles players return.

If all goes according to plan, the Badger North title will likely remain in Waunakee’s hands for the foreseeable future.