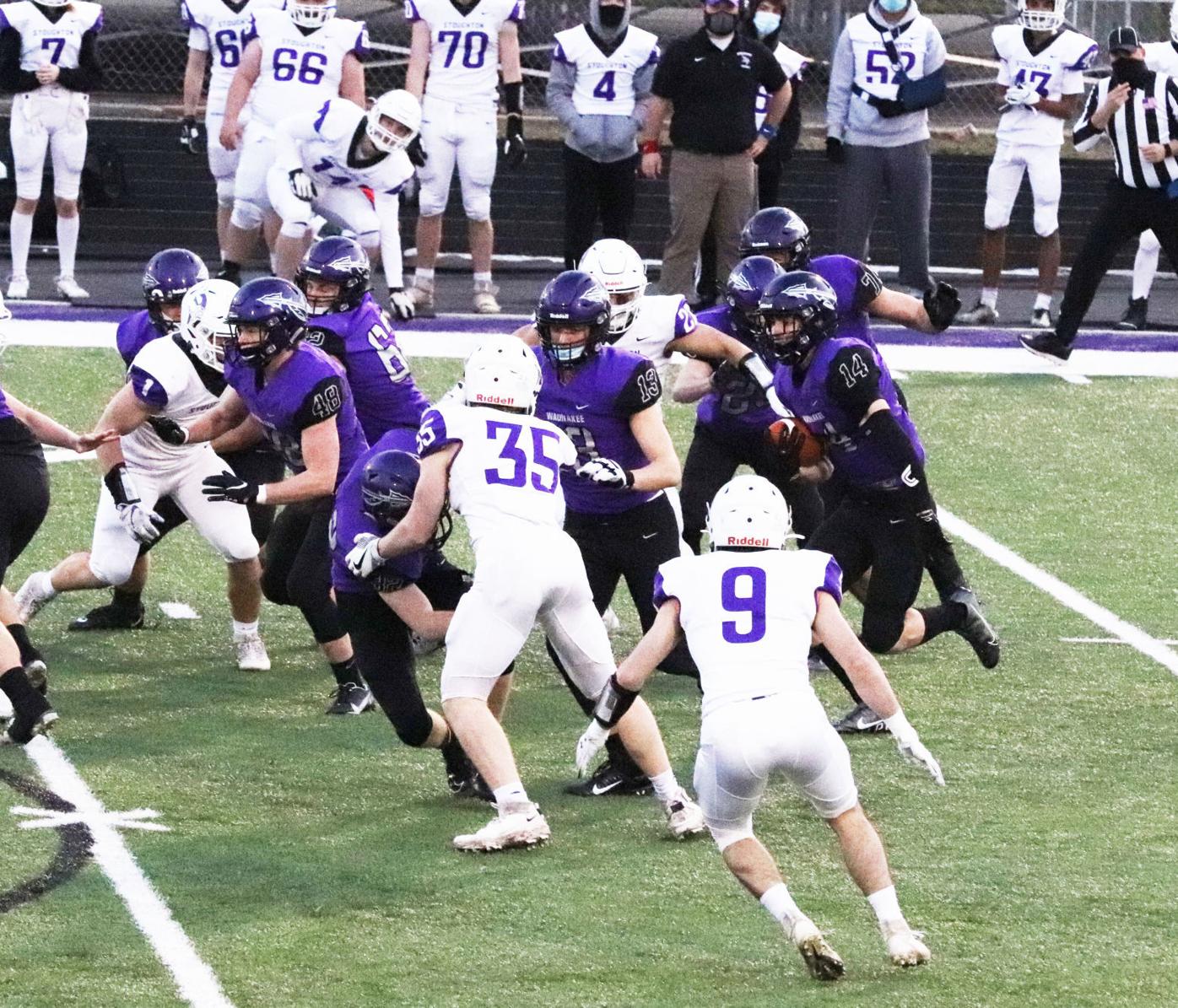 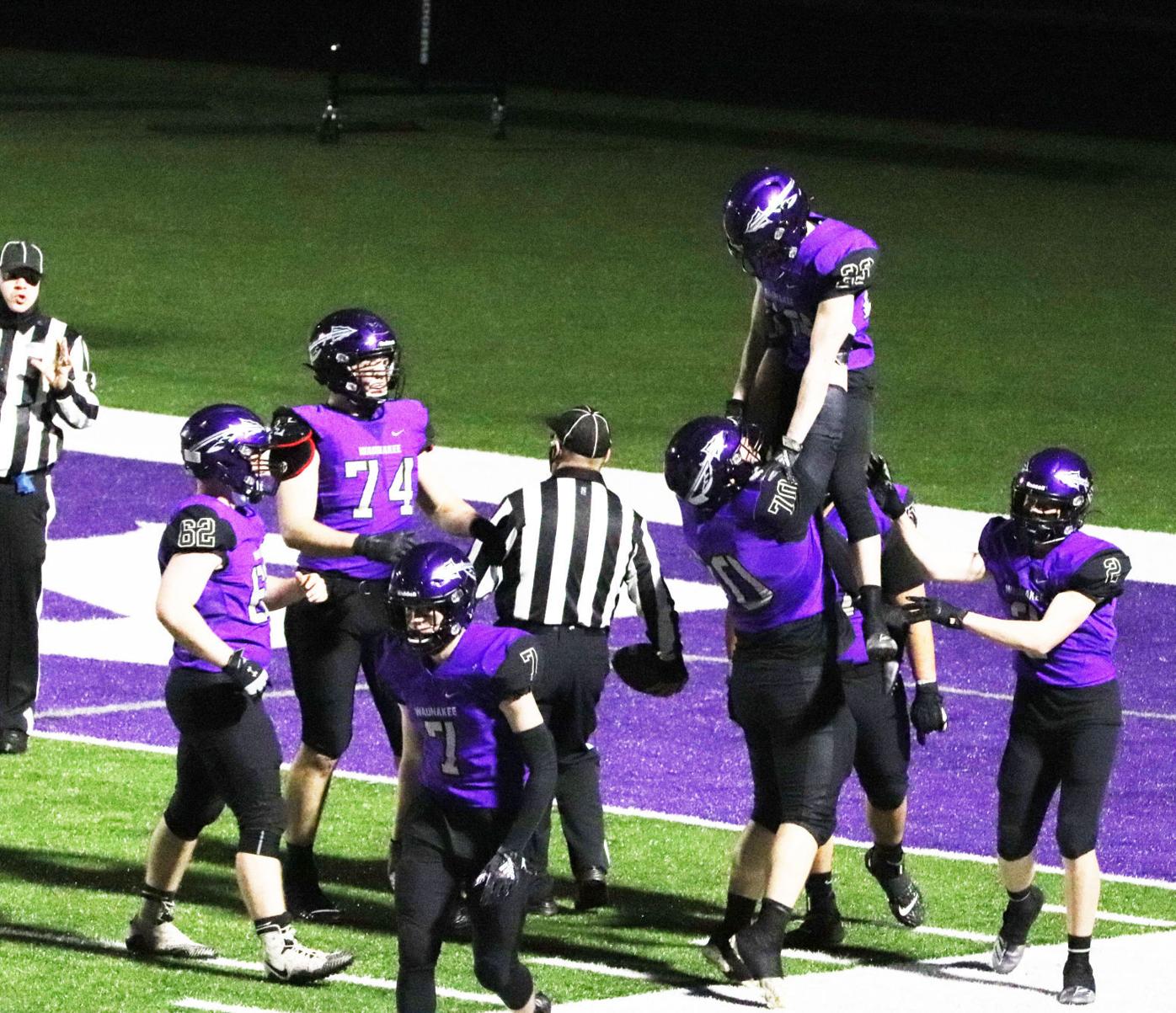 The Warriors congratulate Isaac Schaaf after his 33-yard touchdown reception in the second quarter of the season opener.

Waunakee running back Michael Gnorski rushes up the middle against Stoughton. 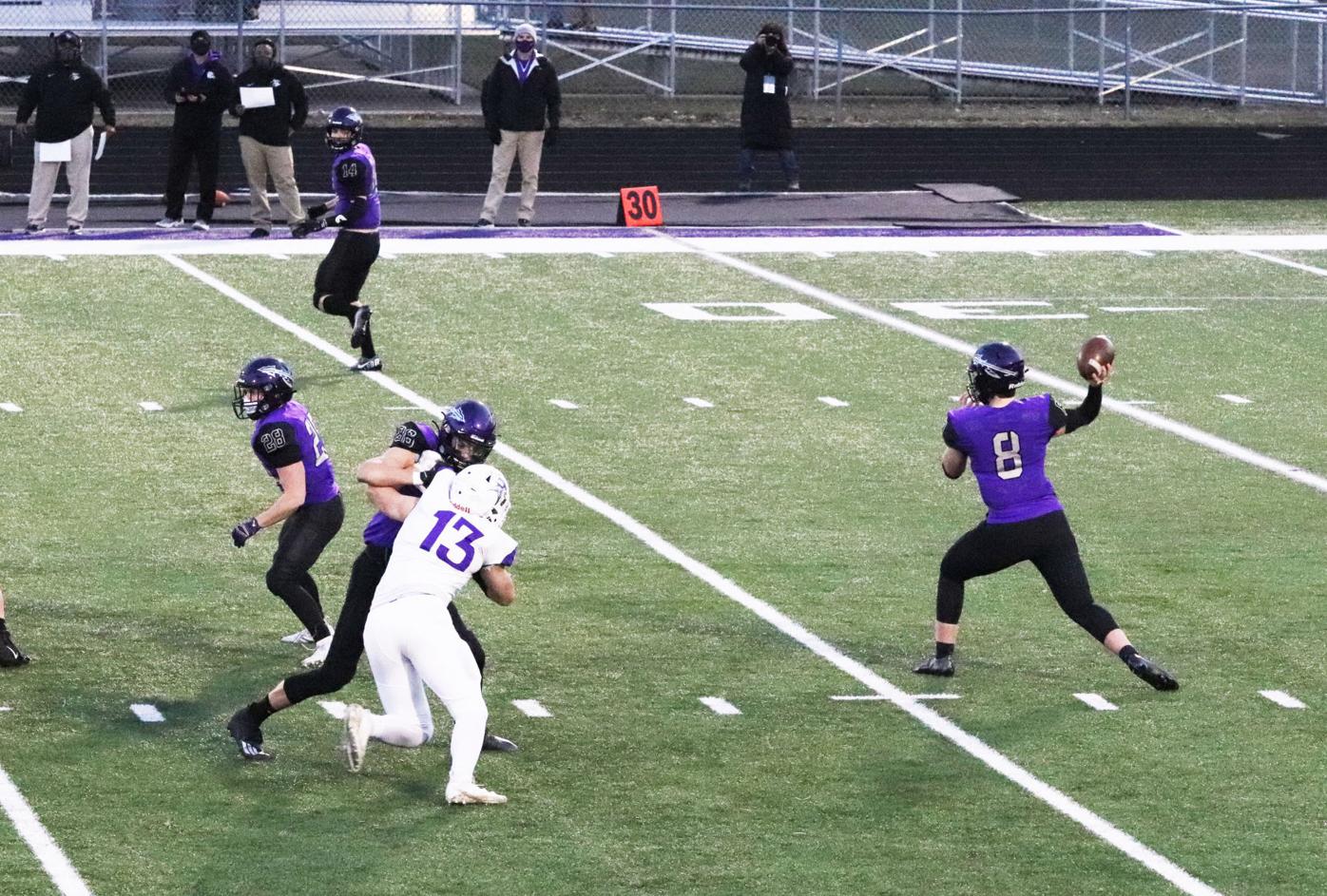 Warrior quarterback Quentin Keene was 11-for-29 passing for 151 yards and a touchdown during lats week’s season opener against Stoughton.

The Warriors congratulate Isaac Schaaf after his 33-yard touchdown reception in the second quarter of the season opener.

Waunakee running back Michael Gnorski rushes up the middle against Stoughton.

Warrior quarterback Quentin Keene was 11-for-29 passing for 151 yards and a touchdown during lats week’s season opener against Stoughton.

With a such a long layoff since his team last played, Waunakee football coach Pat Rice expected the Warriors to have a little rust when they hosted Stoughton in the alternate spring season opener last Friday.

“It was awesome to be back on the field,” Rice said. “It has been like 500 days or so off, so it was great to be back. It was a new experience to be in the spring, but it was exciting. The kids were very happy.”

The Warriors were able to shake off the rust and garner a 34-13 victory over the Vikings.

“I thought we competed,” Rice said. “We certainly have some things to clean up, but that is expected with such a long layoff. We made a lot of mistakes, but it was great to be out there and competing. Execution-wise, there were a number of things we have to work on.”

It is the seventh straight season Waunakee has opened with a victory.

“We are going to learn a lot from this game,” Rice said. “The good thing is that we had a lot of correctable mistakes.”

It took the Warriors some time to get going offensively last Friday.

Waunakee got on the scoreboard first with 1 minute, 42 seconds remaining in the first quarter. Caden Nelson scored from 13 yards out, but the extra-point kick was blocked.

“It was kind of a choppy night for us offensively,” Rice said. “We have some things we need to work through. We have a number of new kids getting their first varsity experience, so that was kind of expected. Once we settled in, we were able to get into a flow. It was frustrating at times, but that is typical for a first game. The kids did a great job of handling the ups and downs of the game.”

The Warriors extended the lead to 13-0 midway through the second quarter after quarterback Quentin Keene threw a 33-yard scoring strike to Isaac Schaaf. Aidan Driscoll added the extra-point kick.

Nelson added a 7-yard touchdown run two minutes later. After another extra-point kick by Driscoll, Waunakee led 20-0 with 4:16 remaining in the first half.

Stoughton finally got into the endzone with 56 seconds remaining in the first half. Jonah O’Connor had a 29-yard scoring run. The Vikings missed the extra-point kick.

Waunakee grabbed control of the game with two more touchdowns by Nelson in the second half.

With 6:11 remaining in the third quarter, Nelson caught a pass from Keene and raced 42 yards to the endzone.

Keene and Nelson hooked up again with 3:17 left in the game to put the Warriors up 35-6 with a 6-yard scoring strike.

Stoughton got a late 80-yard touchdown pass from O’Connor to Ayden Probst to close out the scoring.

Nelson had a remarkable game for the Warriors. He rushed for a game-high 124 yards and two touchdowns on 23 carries. He also caught four passes for 61 yards and two scores.

“He is a playmaker,” Rice said. “He can do it all. He can line up in the backfield and do a number of things for us. We are able to move him around and use his versatile skill set. He is a special athlete and is pretty dangerous with the ball in his hands.”

Keene finished the game 13-of-16 passing for 163 yards, three touchdowns and an interception.

Schaaf had four catches for 79 yards and a touchdown.

Sam Lorenz and Caden McCurdy both had an interception for the Warriors, while Max Raemisch recovered a fumble. Randy Vojtisek and Daniel Ford both recorded a sack.

O’Connor led Stoughton on offense with 44 yards rushing and a touchdown on 12 carries. He was 11-for-29 passing for 151 yards, a touchdown and two interceptions.

Waunakee will play at home again on April 1. The Warriors will host Fort Atkinson at 7 p.m.

“We all felt like we left some things out there in the first game, so we need to work on some things,” Rice said. “We have a new game plan for Fort Atkinson so that we can take the next step. There is always a big jump from Game 1 to Game 2.”