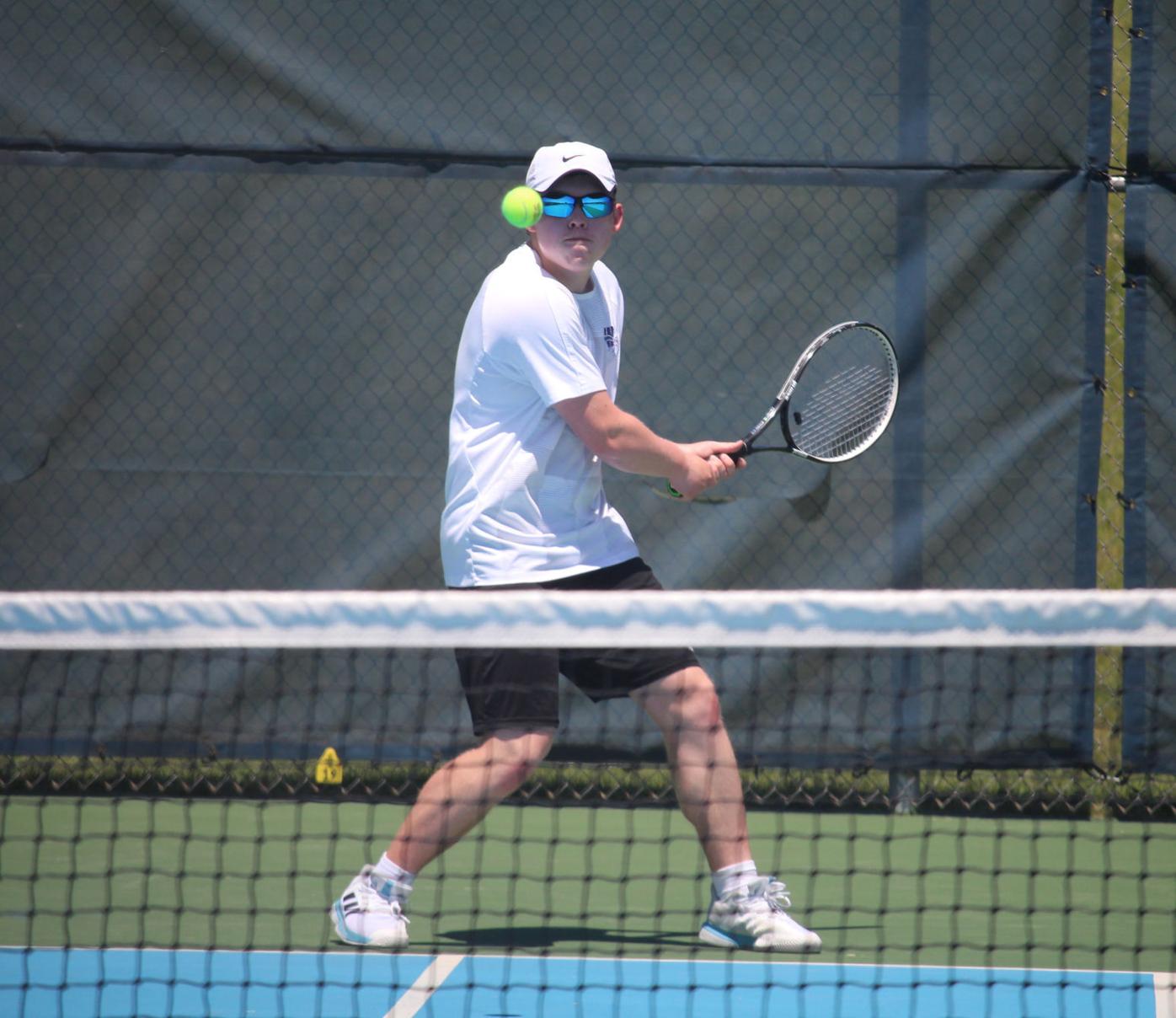 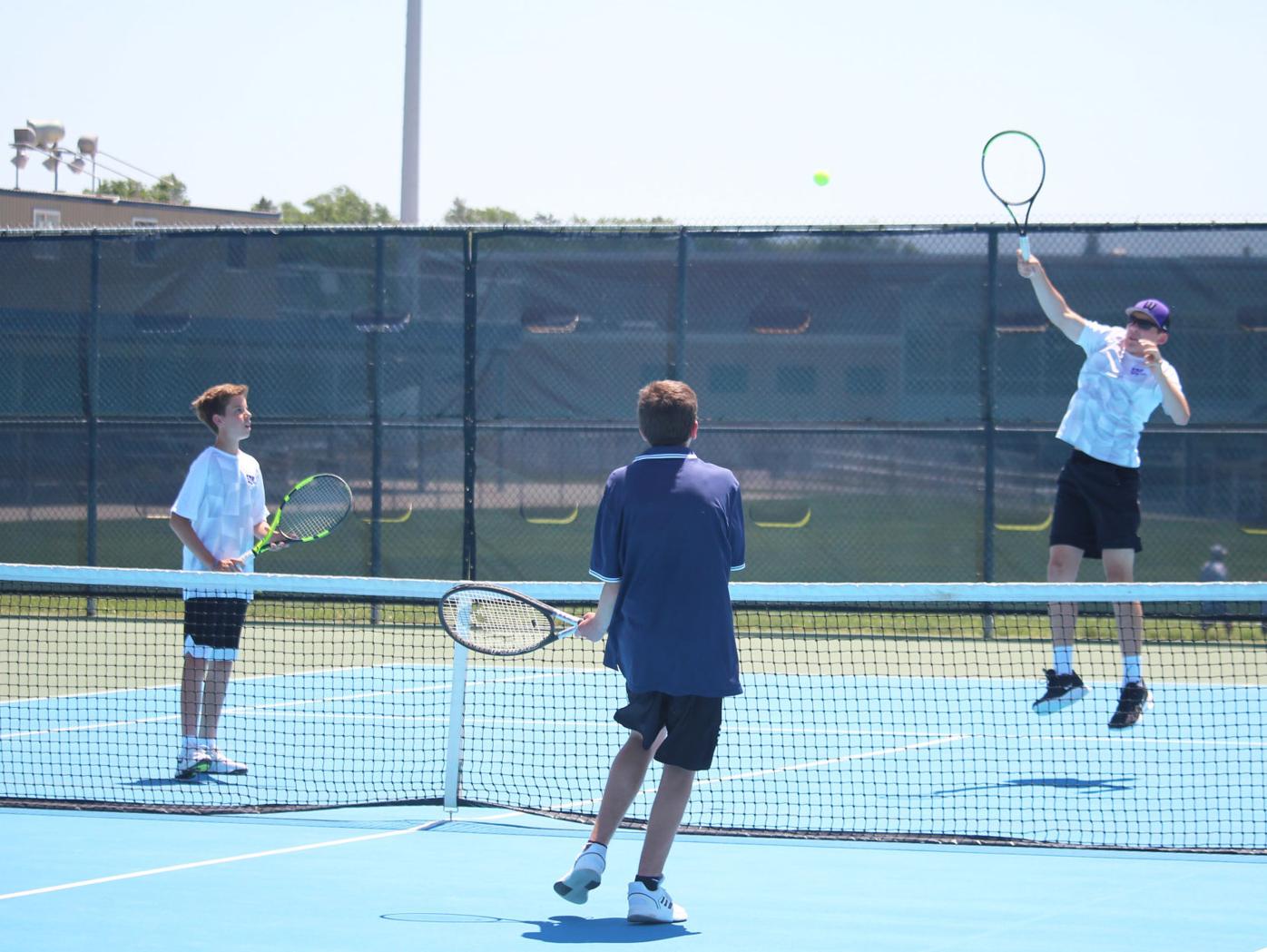 {span}Waunakee’s George Zimbric and Jaxon Wipperfurth slam home a winning shot on their way to a conference title at No. 3 doubles.{/span} 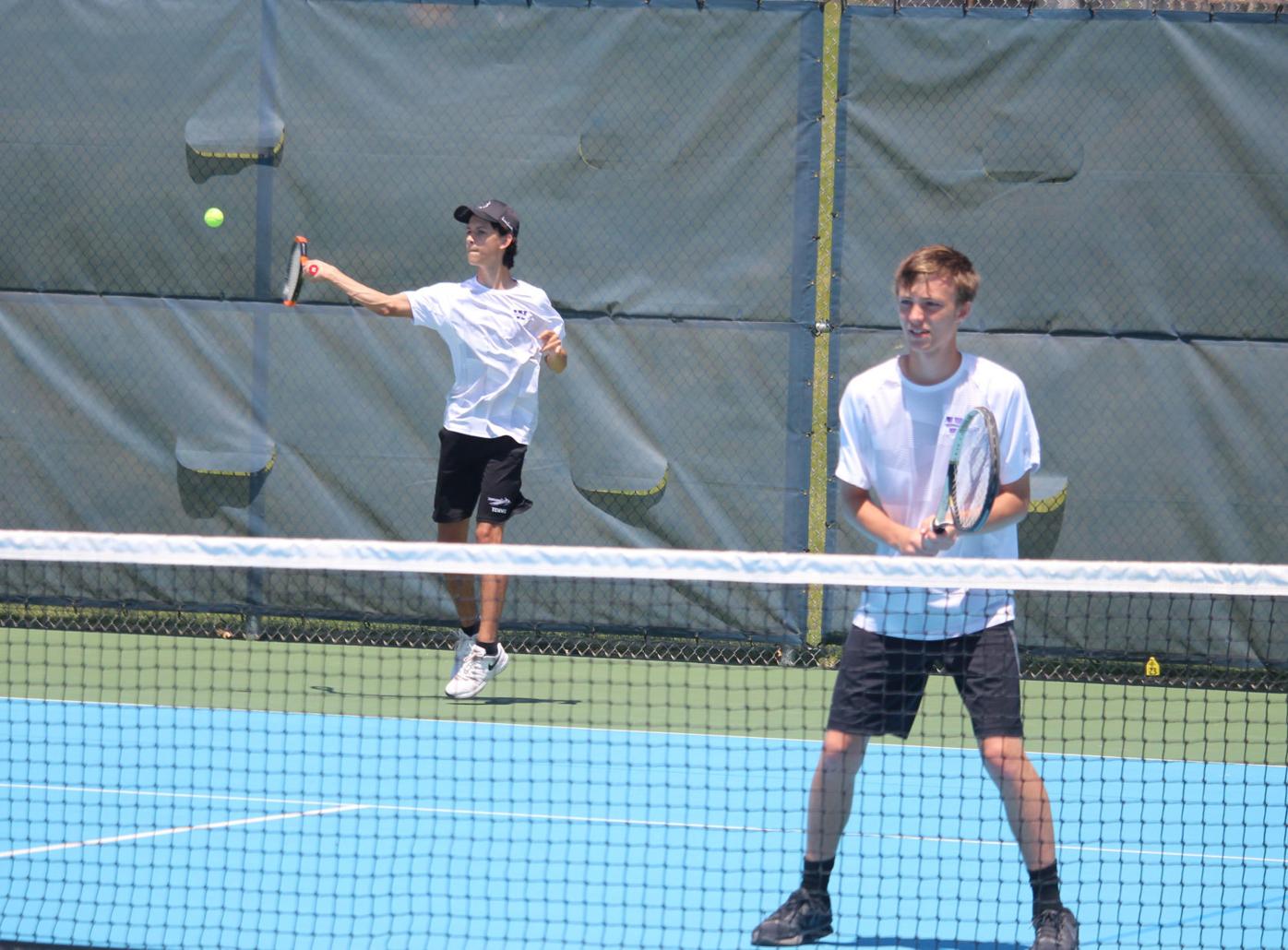 Waunakee’s No. 2 doubles team of Aiden Schmalz and Joey Dettor finished in second place at the Badger North Tournament

{span}Waunakee’s George Zimbric and Jaxon Wipperfurth slam home a winning shot on their way to a conference title at No. 3 doubles.{/span}

Waunakee’s No. 2 doubles team of Aiden Schmalz and Joey Dettor finished in second place at the Badger North Tournament

The Waunakee boys tennis team put together a near perfect showing at last Friday’s Badger North Conference Tournament. The Warriors dropped just one match and earned six titles on their way to the team championship.

Waunakee finished the tournament with 40 points, while Reedsburg was a distant second with 21. Portage and Sauk Prairie tied for third place with 10 team points, followed by Baraboo (nine), DeForest (nine) and Beaver Dam (six).

“On Friday we played very well and took home six of the seven flight championships,” Waunakee coach Chris Nuenthel said. “We haven’t had many practices at all. I think just two in May since the first week, but our doubles are getting better and better with each match we play. I’m excited for them going into post season playing their best and we’ll see how well they can do.”

It is the second straight conference title for the Warriors.

Waunakee had all four singles players and all three doubles teams earn the No. 1 seed at the tournament.

The Warriors won all four singles titles after not dropping a single game.

Waunakee’s Tyler Nelson repeated as champion at No. 1 singles. After a bye, Nelson beat Sauk Prairie’s Ayden Wildeman 6-0, 6-0 in the semifinals. He then blanked Reedsburg’s Anthony Buss 6-0, 6-0 in the finals.

Caden Collins picked up the title at No. 2 singles for the Warriors. He beat Reedsburg’s Joshua Thomas 6-1, 6-0 in the semifinals and then captured the crown with a 6-2, 6-2 win over Beaver Dam’s Dan Lugo.

Levi Christian kept things going at No. 3 singles for Waunakee. He knocked off Portage’s Alex Reitmann 6-4, 6-2 before shutting out DeForest’s Aiden McCloskey 6-0, 6-0 in the championship match.

Hayden Liu had the final singles title for Waunakee. He won the No. 4 singles crown after defeating Reedsburg’s Brogan Helmeid 6-1, 6-0 and Portage’s Kyle Kinzler 6-0, 6-3.

The Warriors’ Reed Christian and Matthew Pulvermacher garnered the title at No. 1 doubles. After outlasting Reedsburg’s Alex Woodruff and Corbin Ellifson 6-1, 4-7, 10-3 in the semifinals, Christian and Pulvermacher defeated Baraboo’s Owen Nachtigal and Campbell Koeser 6-3, 6-4 in the championship match.

George Zimbric and Jaxon Wipperfurth captured the final title for Waunakee at No. 3 doubles. They followed up a 7-5, 6-2 win over Baraboo’s Brice Parchem and Andrew Brooks in the semifinals with a 6-3, 6-3 victory over Reedsburg’s Dayne Meinhardt and Tyler Singletary.

Waunakee’s No. 2 doubles team of Aiden Schmalz and Joey Dettor finished in second place. They earned a spot in the finals with a 7-5, 7-6 victory over Baraboo’s Gabe McReynolds and Montgomery Hartman, but lost to Reedsburg’s duo of Simon Wenninger and Jordan Matyas 7-5 (8), 5-7, 10-5.

Waunakee took part in the WIAA Division 1 Baraboo Subsectional earlier this week. A recap will be in next week’s Tribune.

Oconomowoc will host the sectional at 9 a.m. on June 9.