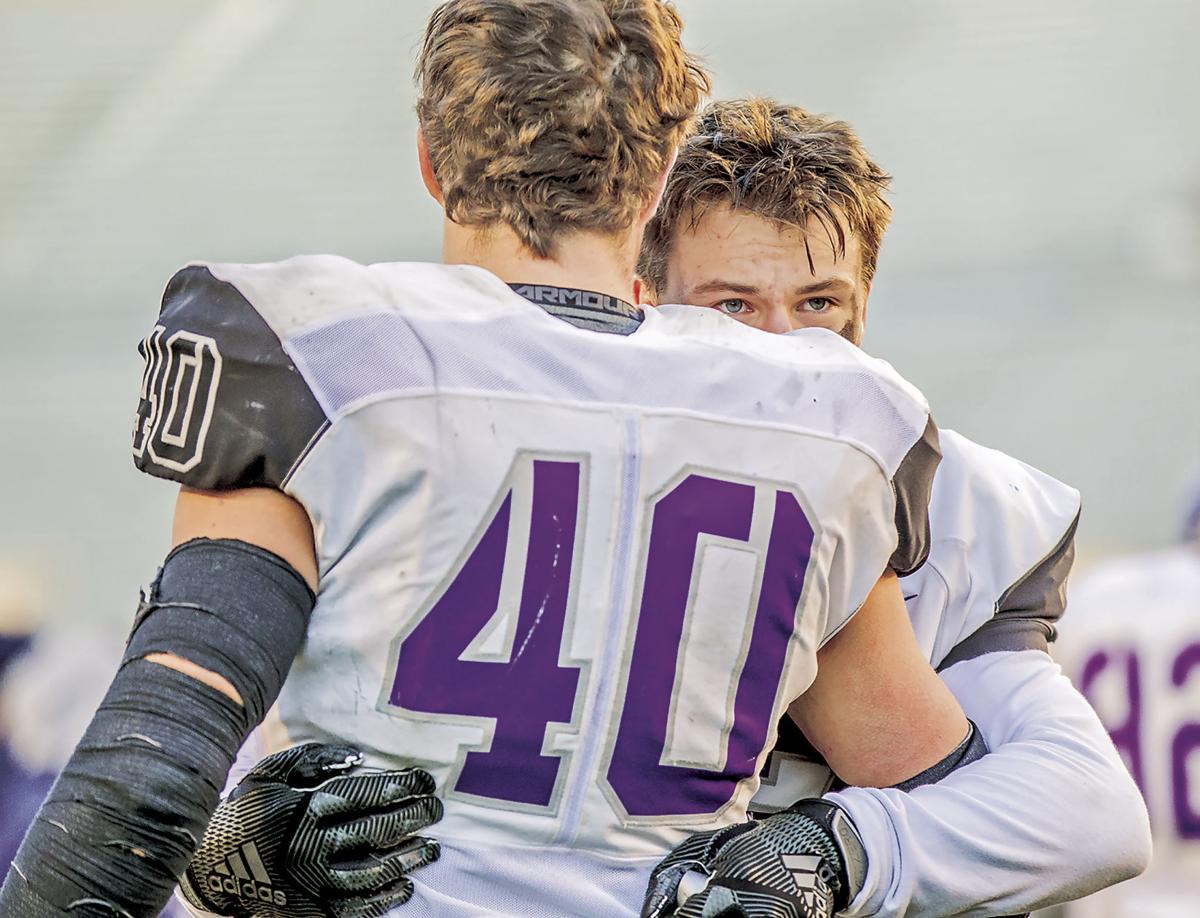 Jordan Wuensch and Jeb Frey (40) share a hug after the season's final whistle at Camp Randall. 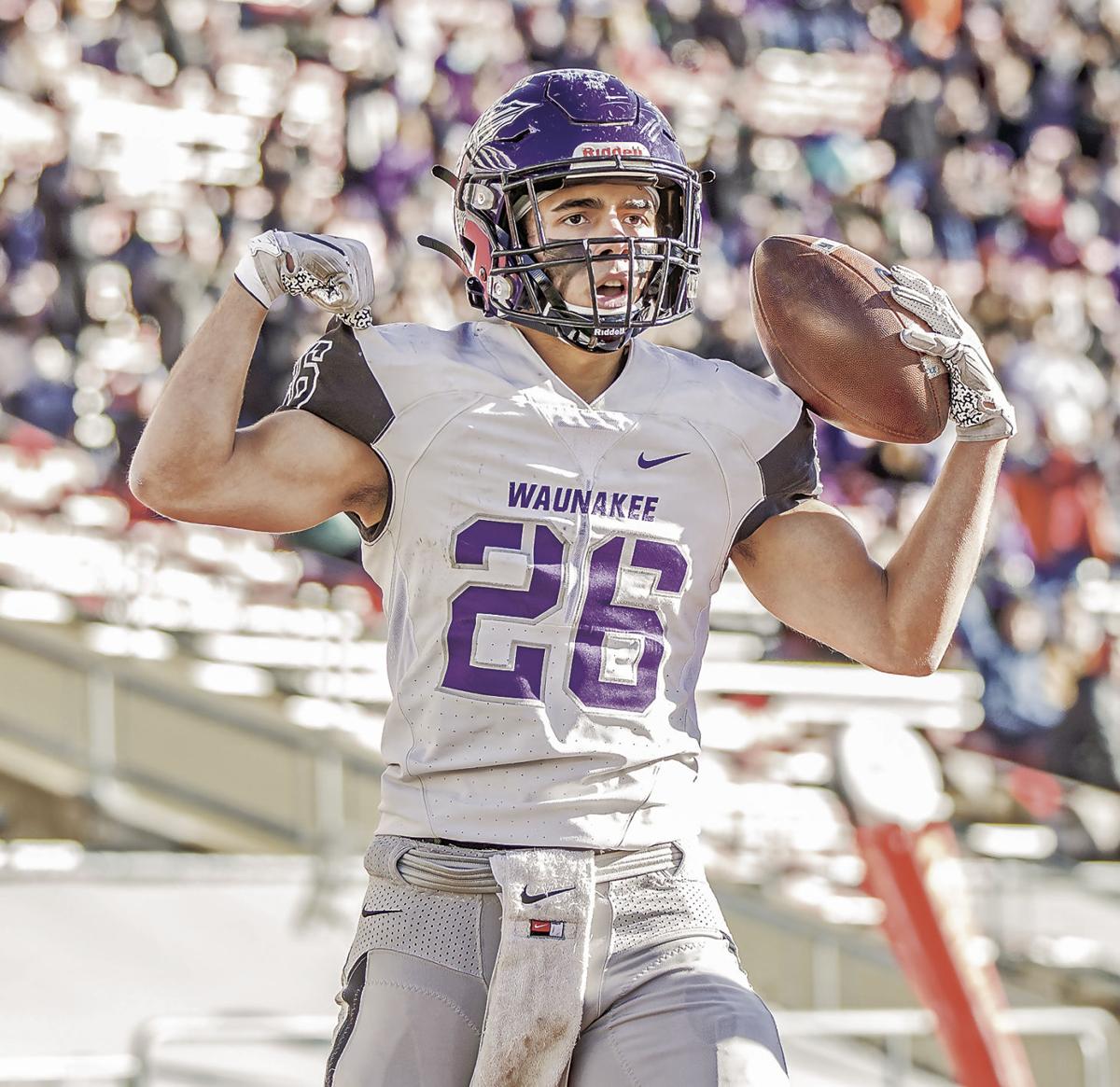 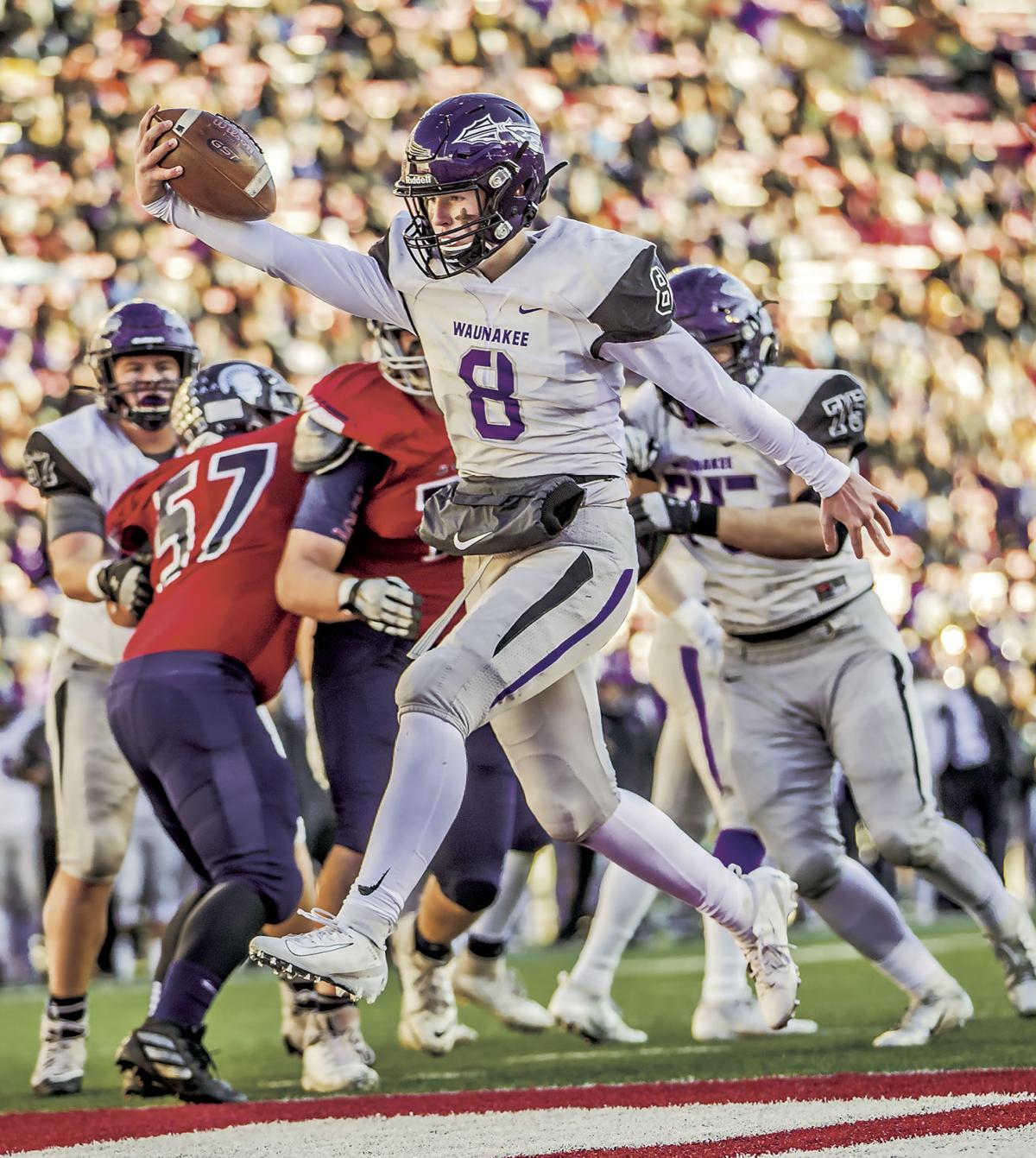 Quentin Keene crosses into the end zone, punctuating the first Warrior possession of the second half with a score. Keene was Waunakee's leading passer with 265 yards and three touchdowns and leading rusher with 67 yards.

Jordan Wuensch and Jeb Frey (40) share a hug after the season's final whistle at Camp Randall.

Quentin Keene crosses into the end zone, punctuating the first Warrior possession of the second half with a score. Keene was Waunakee's leading passer with 265 yards and three touchdowns and leading rusher with 67 yards.

In the end, that’s all that separated the Waunakee football team from the Spartans of Brookfield East in their WIAA Division 2 State Championship game.

“They’re fighters; that’s all you can say,” Waunakee’s Head Coach Pat Rice said of his team. “They had 10 different ways they could have went away and they didn’t. They stayed in there.”

All throughout the first half, Waunakee’s biggest problem was the Spartan running back Donovan Hunt. Hunt racked up 190 yards and three scores in the first two quarters, breaking tackle after tackle in the process.

Hunts three scores – along with another rushing touchdown by Brookfield East’s quarterback – meant that the Warriors trailed the Spartans 28-10 halfway through the second quarter. Waunakee’s points came via a 32-yard catch and run from Quentin Keene to Cole Mobley in their first possession of the game and a 27-yard field goal by Aidan Driscoll on the first possession of the second quarter.

After Hunt’s third score of the day, the Warriors found themselves in an all-too-familiar position this postseason: trailing by double digits. A Waunakee team that found a way to battle back in game after game throughout the 2019 playoffs dug in one more time to mount a comeback.

“We didn’t play a perfect game, but the way they always came back, the resilience…” added Rice. “It’s a group I’m really proud of.

The Warriors marched 80 yards in just seven plays, highlighted by a five-for-five performance on the drive through the air by Keene. Waunakee’s sophomore signal-caller hit four different receivers – Andrew Keller, Caden Lewis, Hayden Blang and Jordan Wuensch – on his five attempts, capped by a 31-yard rainbow to Wuensch into the end zone. A diving Wuensch hauled in the pass, bringing the Warriors to within 11 points: 28-17.

The Warriors received the second-half kickoff, but their drive stalled at midfield after just five plays. Lined up to punt, Waunakee pulled off a perfectly-executed fake; Jacob May found a wide open Joe Hauser for a 24-yard gain, breathing life back into the Warrior drive.

Neither side was able to sustain drives for long as the second half wore on; a combined five drives later, only the Spartans had added to the score via a third-quarter field goal.

Down 31-24, Waunakee started a new drive on their own 32 with 6:16 remaining in the fourth quarter. Needing to score a touchdown, it took the Warriors seven plays – including a 33-yard catch and run over the middle by Isaac Schaaf on fourth and two – to reach the red zone. On first and goal, with the end zone in sight, disaster struck. A fumble by Cole Mobley was recovered by the Spartans, giving Brookfield East an opportunity to put the game on ice with only 90 seconds to play.

Though Waunakee still possessed all three of their timeouts, one first down by the Spartans would end the game. Brookfield East turned to their workhorse back Hunt in an attempt to drain the clock. A stout effort by the Warrior defense held Hunt short on second and third down, giving their offense one more chance.

“We didn’t tackle very well early,” Rice said of the difference between the Warrior defense in the first and second halves. “I think once we settled in and started tackling, we got into a package that was a little bit better for us defensively… We played a really good second half, an unbelievable second half to give us a shot.”

With 59 seconds to go, Waunakee started with the ball on the Brookfield East 36. Keene found Blang across the middle on the second play of the drive for 25 yards, and the Warriors were suddenly within striking distance. On the ensuing play, Keene – who racked up 265 yards passing on 25 for 36 attempts – looked for his fellow sophomore Keller in the back left corner of the end zone; Keller nearly pulled off the highlight-worthy jump ball, but after a review, the refs determined he was out of bounds.

Still needing a touchdown, Keene found Randy Vojtisek for a seven-yard gain to bring up a third and three to the four-yard line. With precious few seconds remaining, the Warriors scrambled to the line and quickly snapped the ball; forced to scramble to his right, Keene again found Vojtisek on third down. This time, Vojtisek made the grab in the end zone, catching Keene’s third touchdown pass of the day. With eight seconds remaining, Waunakee was one point behind.

“We had a lot of momentum,” said Rice. “If we took it into overtime, we’d be in good shape.”

The Warriors lined up to kick the game-tying extra point, but Driscoll’s kick went wide right, leaving Waunakee trailing by one: 31-30.

This meant Waunakee needed to do two things in eight seconds: recover an onside kick and score a touchdown.

On the kickoff, the Warriors accomplished task number one; David Kienow outleaped a sea of hands to recover the onside kick; with seven seconds left, Waunakee had their final opportunity to get the win.

Needing to find the end zone, Waunakee’s trick play – a reverse to Schaaf – was bobbled, and the ball hit the turf of Camp Randall. Brookfield East came up with the ball and – with no time left on the clock – the Spartans held on for the narrowest of victories in the Division 2 title game: 31-30.

“It tells me exactly what I knew about them. They’re going to stay in the fight; they’re going to keep battling…” said Rice when asked what the title game taught him about this Waunakee team. “Could we have done some things better? Yeah, certainly. But the way they battled and the way they tried to hang in there was pretty cool.”

Waunakee’s passing attack was well-balanced all throughout the day; Wuensch led the team with 54 yards on five catches, followed by Blang with 52 yards on three catches, while Keller and Schaaf each racked up 48 yards.

After claiming the silver ball following the final whistle, Waunakee’s final record stands at 12-2. Their run – particularly in the postseason – has stamped their place as one of the program’s special teams.

“They just hung in there,” Rice said. “We had every reason to say we’re going to be a .500 team. We were down to our third quarterback in one playoff game. We were into our third and fourth tailback. We had kids that were playing defensively that we didn’t have on our two-deep. Just the way they hung in there and found a way to get it done… It’s tough to step back when you’ve just lost the state championship by a point. But the fact that they stayed together and they did things the right way, they worked their tails off, it’s easy for me to paint this as a pretty rosy picture… I’m proud of them.”