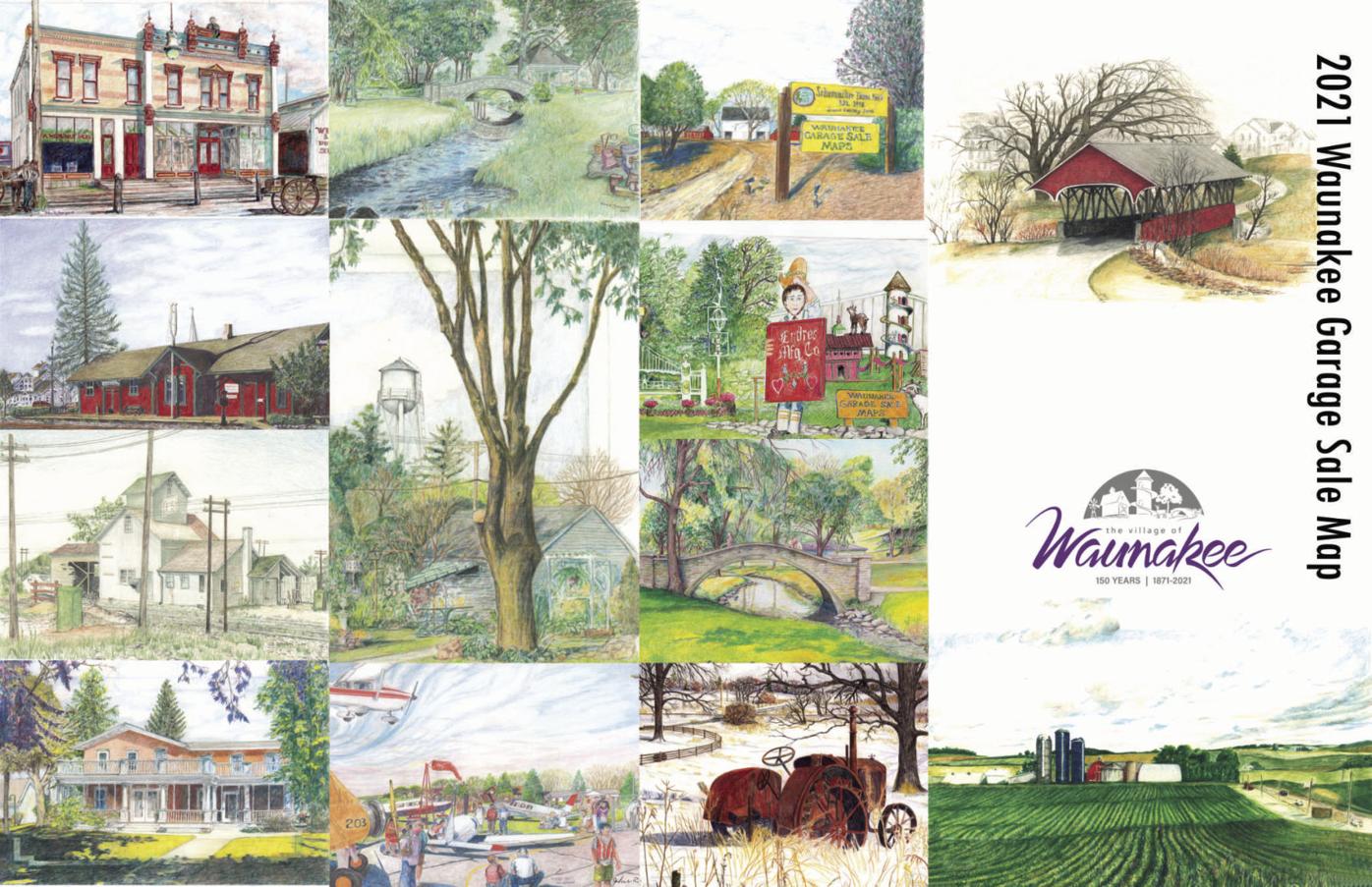 This year’s map cover recognizes Waunakee’s 150th year with a collage of previous map covers by artist John Sargent, who has died since the 2019 event. 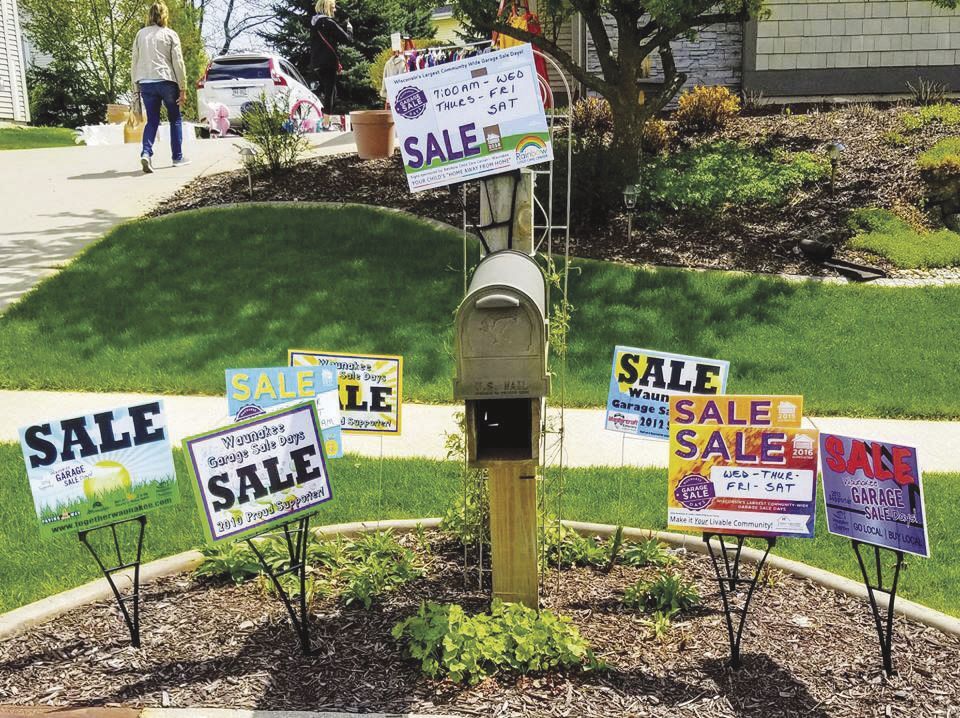 This family posted signs from previous sales through the years.

After a period of on-again, off-again planning, Waunakee Garage Sale Days were ultimately cancelled last year as Dane County and other communities took precautions to prevent the spread of the COVID-19 virus.

But this year, the organizers, Pastor Leonard Allen and his wife Becky, say they believe the community is looking forward to a successful, celebratory event.

Leonard Allen noted that on the Waunakee Garage Sales Facebook page, the post telling folks the final deadline to get their ads on the maps generated tens of thousands of views.

Shoppers can find just about anything if they look hard enough during the three-day event – including houses and cars.

And dedicated repeat shoppers to Waunakee Garage Sales Days – always the Thursday, Friday and Saturday prior to Mother’s Day – can preview the sales in a map produced through Christian Life Assembly of God Church.

The Allens oversee the village-wide map and sales each year and say they are honored to provide this service to the community. Since they took over event 15 years ago, the Allens have come to see their role in it as coordinators.

The task of creating the map for the event takes a village, they say. Between 800 and 900 sales open that weekend attracting people from surrounding states as well as area residents.

That brings consumers looking not only for garage sale bargains, but hungry shoppers, too.

“It generates something like $2 million in revenue for the community,” Leonard Allen said about the event.

Businesses in the food industry have told him Waunakee Garage Sale Days generate an extra weekend for their food sales each year.

A number of partners come together to make Waunakee’s unique event so successful, one Leonard Allen estimates is the largest in Wisconsin.

he garage sale signs, the stakes, the printing costs and advertising in the Waunakee Tribune. About a month before the ads are due, the Allens publish a form in the Tribune for those hosting the sales to fill out. Those ads in the maps start at just $5.

“We want the entry level to be as little as possible,” Becky Allen said, adding that the cost buys the ad, the sign and stake.

The sale forms are then dropped off at the UPS Store and typed, then proofread four times for accuracy.

The volunteer team of about 20 contact businesses for ads in the map. Through the Tribune, a printer is contracted to produce the maps.

A local artist, John Sargent, had drawn the map covers since the Allens began having it printed in color on a web press. Sargent has died, so this year’s cover features a collage of his pervious drawings. With the Waunakee sesquicentennial logo, the cover also celebrates the village’s 150th year.

Timing of the maps distribution – at all participating Waunakee businesses – is crucial, the Allens said. The maps are due to the businesses at 5:30 p.m. Wednesday – the day before the event begins. After bundling the maps into counts of 25, the 20 or so volunteers drop them to the participating businesses within 15 minutes, ensuring shoppers can find them then resupply them as needed.

The Allens created an online presence for the weekend with a website and Facebook page, and participating businesses are all listed on the site.

Proceeds from the advertising sales in the map go to the church, but the Allens say after all expenses, that adds up to about $1,000 per year. That money is reinvested in the community with a portion going to a fund for drug treatment for individuals in need.

“We’re a drug rehab entry point,” Leonard Allen said of the church, adding that the church pays for a year and a half of rehab.

Funds also go toward youth programs and events like WaunaFest.

Other nonprofits also see a benefit. Many community organizations host sales to raise funds for the American Cancer Society and other medical research organizations. Instructions are included for donating unsold items. The Allens say St. Vincent de Paul picks up about 40 loads of clothing and other items for its stores.

The event brings consumers looking not only for garage sale bargains, but shoppers, too.

“It generates something like $2 million in revenue for the community,” Leonard.

Business owners in the food industry have told him Waunakee Garage Sale Days generate an extra weekend for their food sales each year. But this year, with public health orders restricting gatherings, store owners and managers are planning more carefully.

“Those that don’t have dining rooms fully open are trying to figure out how to handle the additional customers,” Leonard Allen said.

Many businesses this year have advertised in the map booklet and are distribution points.

“Our model is, the distribution points are those businesses that participate in the team,” Becky Allen said.

“We involve dozens of businesses, and almost every new business does some ad campaign. It’s a way to expose themselves not only to people from Waunakee but from four states,” Leonard Allen added.

Also included in the maps are tips for courteous garage sale shopping, discouraging bargain hunters from parking at businesses they’re not visiting, while encouraging them to drive safely, stop at lemonade stands, and stay hydrated.

A separate parking area is offered in the industrial park for trailers, allowing shoppers who buy large furniture to make their deals then return later for pick-up.

When all community members come together with a common goal, the event is most successful, the Allens said.

Even those who aren’t shopping seem to enjoy the three-day sale. The Allens remember seeing boys “busking,” playing their violins for donations, then using earned cash to buy candy bars. Food stands are in full regale, with the smell of meat grilling. Shoppers are out in droves, and if all goes well, everybody makes a little cash, and people return home with bargains.

Leonard Allen calls the church’s role in Garage Sale Days a “service to the community.”