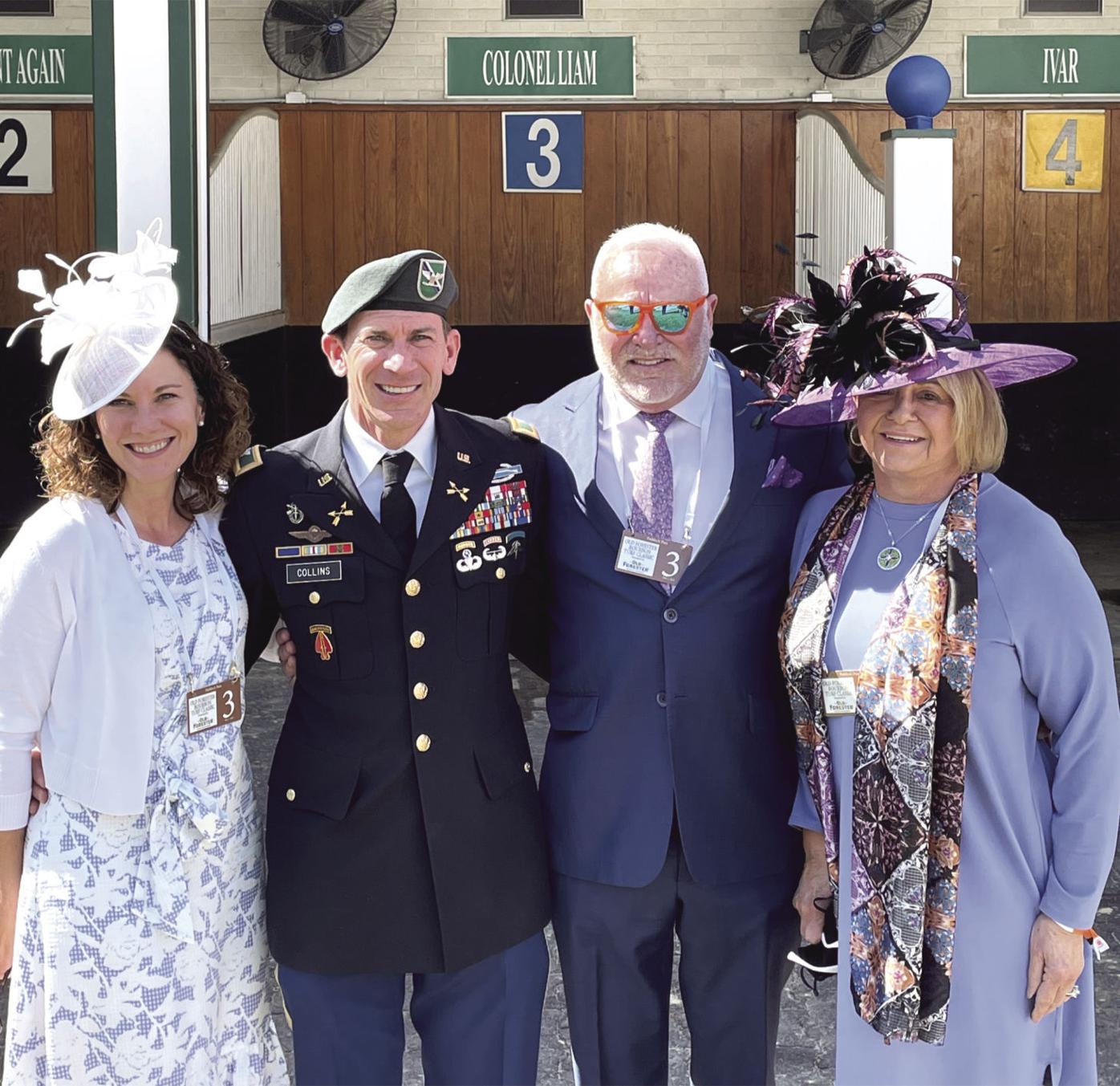 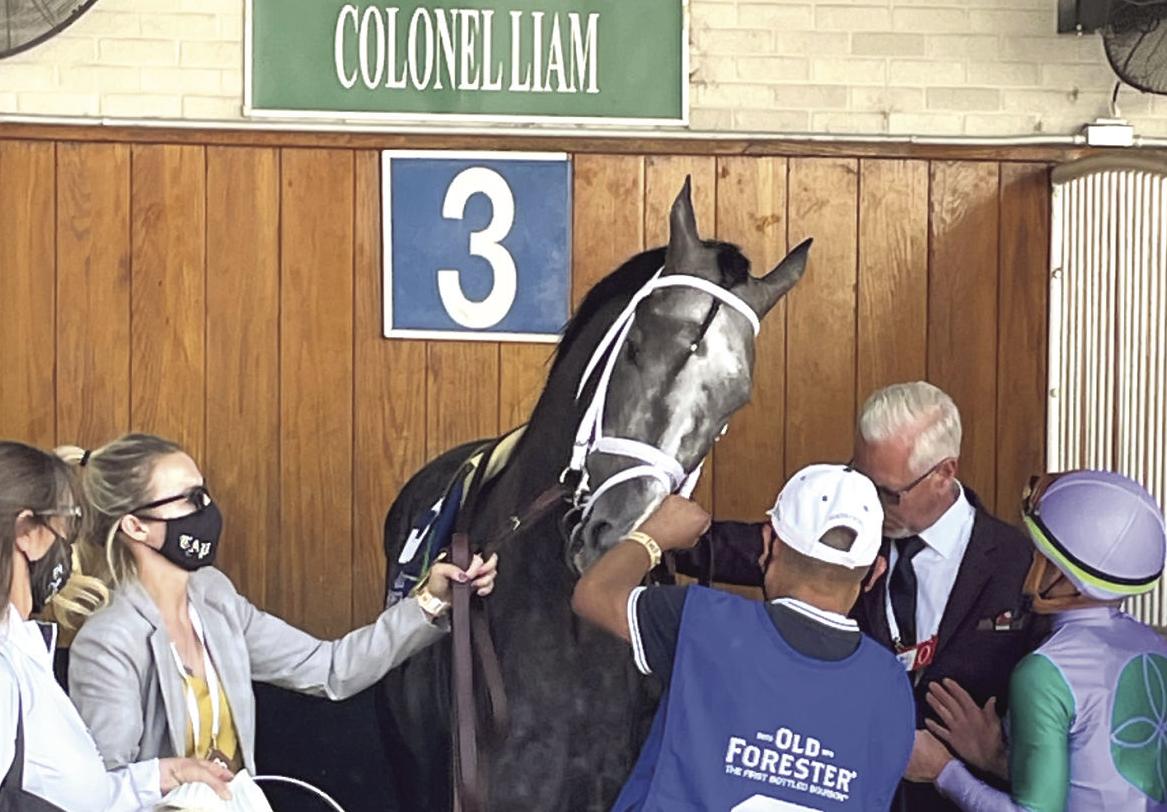 Shown is Colonel Liam with his handlers.

Shown is Colonel Liam with his handlers.

Like most Waunakee residents, Col. Liam Collins usually watches the Kentucky Derby on television. But this year, he got a special invitation to meet one of the horses competing at Louisville.

Collins watched Colonel Liam – the racehorse, that is — finish in a dead heat with Domestic Spending in the Old Forester Bourbon Turf Classic. The horse was named after Collins, one of the first special operations soldiers to arrive in Afghanistan after the 9/11 terrorist attacks upon the United States.

The 4-year-old thoroughbred is the offspring of Liam’s Map, the first of Collin’s namesake racehorses. Colonel Liam’s owners, Robert and Lawana Low, were so moved by the story behind their colt’s sire’s name, they kept it in the equine family. And they wanted to meet the man who inspired it.

Collins is retired from the military now, but the Appleton native attended the United States Military Academy at West Point, where he went on to spend his career. After his retirement, he and his wife Judy moved to Waunakee with their children after visiting the community and the schools. Both are from Wisconsin.

“We could have lived anywhere in the world and we chose Waunakee,” Collins said.

As a soldier in Special Operations, Collins parachuted into Afghanistan shortly after 9/11. He carried with him a silk map of Afghanistan.

“I made up these silk maps of Afghanistan. We had five maps that covered all of Afghanistan, and they had serial numbers, so if you had to go into like an escape and evasion, you wouldn’t have a paper map that would fall apart.”

The maps could also serve multiple purposes, such as straining sand from water.

Collins later worked at the Combating Terrorism Center founded by Vincent Viola and served as its executive director.

Viola, like Collins, attended West Point and graduated in 1977. He also served in the 101st Airborne Division. He was chairman of the Mercantile Stock Exchange during 9/11.

“When the [Twin] Towers came down, he lost a lot of people in the attack,” Collins said.

No longer in the military, Viola founded the Combating Terrorism Center as a way to give back. Collins became its executive director. Among his tasks was serving as co-author of a report in 2011 from declassified documents that informed national counter-terrorism experts.

He also established the Modern War Institute, which he described as a think tank on the meaning of conflict in this contemporary environment, and was responsible for the cadets’ military training.

“It’s harder to distinguish combatants from non-combatants, especially with non-state actors or state actors,” Collins said. The focus was on how to prepare for modern war and respond.

When Collins left his job as executive director, a “Hail and Farewell” ceremony was held, welcoming new additions and bidding goodbye to those leaving. Collins wished to give Viola a gift and chose the silk map he carried into Afghanistan.

“Then, about three months, four months later, [Vincent Viola] told me he’d paid $700,000 for a thoroughbred horse and he named it Liam’s Map,” Collins remembered. “And I was like, ‘Oh my god, this horse is going to be a loser. Why would you do something like that?’”

But Liam’s Map matured as a 4-year-old and experienced success then.

“Finally, his final race, we went to go watch him,” Collins said.

“It was a little stressful for about 10 minutes trying to figure out if he won or not,” he added.

And like Liam’s Map, Colonel Liam has raced well.

“He’s been really successful. We had never met the owners and they never met me. But they had heard the story of Liam’s Map, and when they bought the horse, I guess Robert and his wife Lawana had a discussion and they were like, yup, we want to name it Colonel Liam, which is, you know, after me,” Collins said.