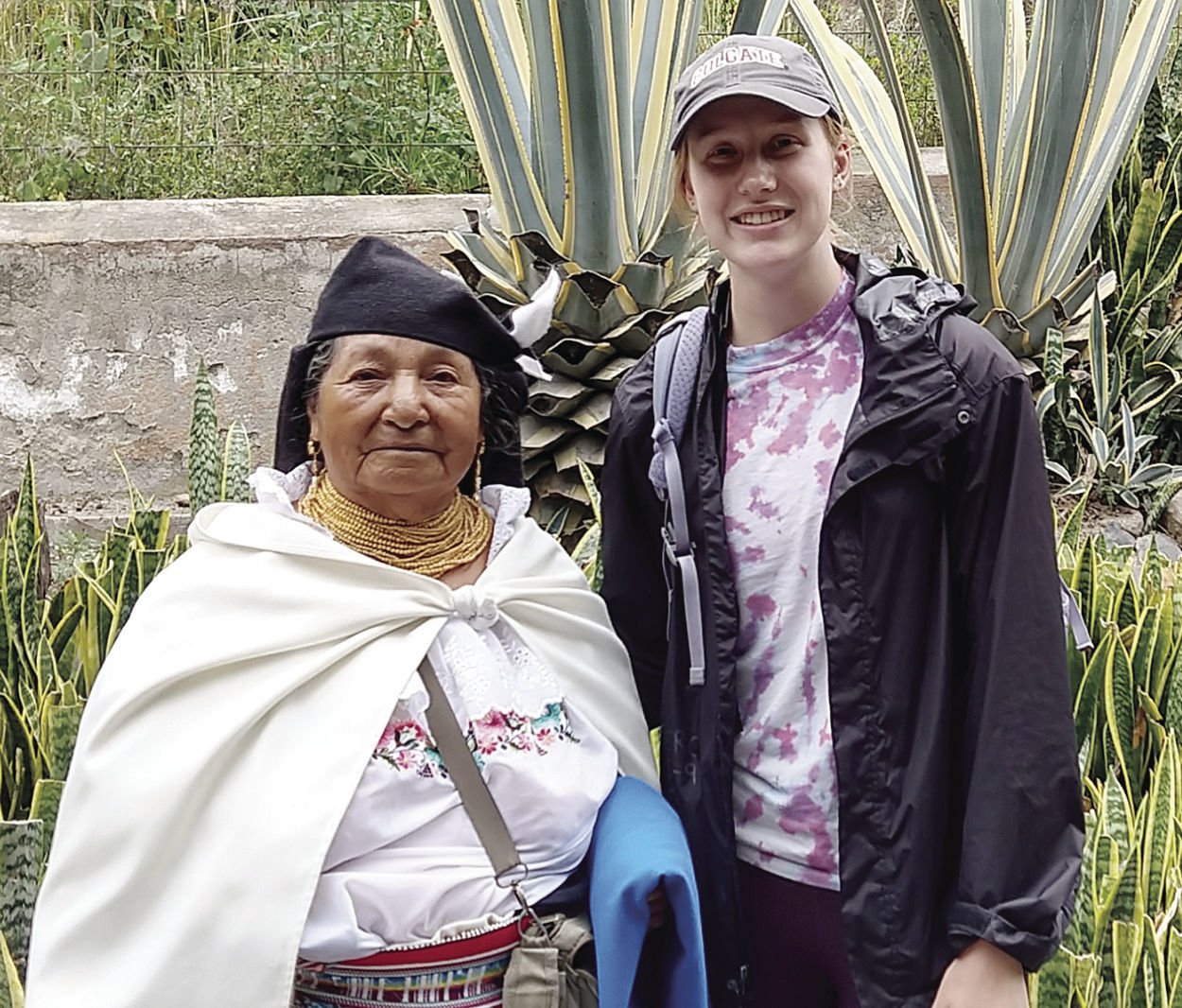 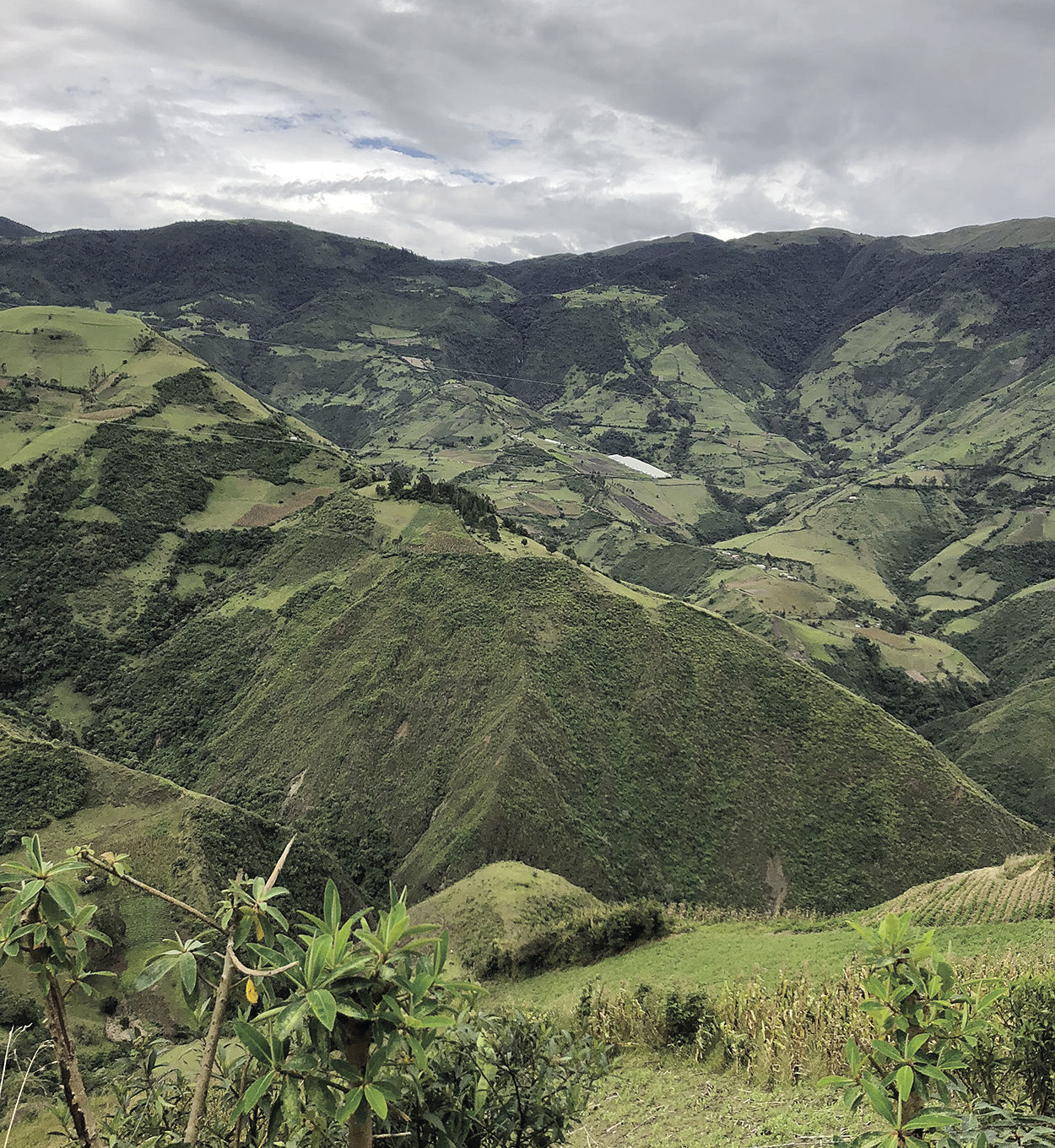 Motilón Chupa, in Ecuador, is surrounded by mountains.

Motilón Chupa, in Ecuador, is surrounded by mountains.

Julianne Luhtala has always been fascinated by South America.

Recently, the Waunakee High School graduate, now a student at Colgate University, traveled to Ecuador as part of a cultural exchange program, which lasted from May 24 to June 7. The two weeks were life-changing.

“It was just amazing,” said Luhtala, who is studying Spanish and Peace and Conflict Studies at Colgate and is going to be a sophomore next fall. “It opened up new horizons. I was able to meet new people. I wanted to test my Spanish. I was able to find some new friends and you’re just able to open yourself up to new things.”

Luhtala was one of nine students and two faculty members from Colgate to participate in the program, organized by The Tandana Foundation. They spent most of their time in the indigenous community of Motilón Chupa, living with host families and helping with a community project.

“Being able to live in and among the community was important,” said Luhtala. “You get a complete picture of what life there is like.”

“Mama Maria,” a 78-year-old grandmother who has lived in Motilón Chupa for 25 years, opened up her home to Luhtala. With the exception of a trip to Canada earlier in life, this was Luhtala’s first time outside the United States.

It gave her a chance to practice her Spanish, while also “doing something worthwhile.”

Initially, the Colgate group was housed in a hostel in the nearby city of Otavalo, before being transported on treacherous roads to Motilón Chupa, in highland Ecuador. Luhtala said driving through the mountains was scary, as they had to take a narrow dirt road that was carved out of the mountainside.

“You’d get close to the edge and you could fall 200 feet,” said Luhtala.

Set in a small, rural area surrounded by tall mountains, Motilón Chupa sits at an elevation of 8,500 feet, said Luhtala.

“It’s definitely not an easy life there,” said Luhtala, who said the population of 30 to 35 families in Motilón Chupa is mostly made up of older people and the very young.

People around the same age as Luhtala move to the city, she said. Luhtala said her host mother has nine children and doesn’t get to see them.

Motilón Chupa is a farming community. Luhtala said rice, lentils and plantains were dietary staples. They also had salads of diced tomato, red onion and cucumber. One thing she didn’t try was the roasted guinea pig called cuy. Luhtala said she wasn’t offered any because the locals didn’t want to offend her.

Some in the community have cars. Those who have them are well off, said Luhtala. She also said that horses were used to get up and down the steep mountain with crops. Luhtala also saw lots of cattle and dogs.

From 8:30 a.m. to 1 p.m. most days, the students worked with at least four community members painting and restoring school buildings in Motilón Chupa under the direction of a maestro, or a project foreman.

Along with sanding and cleaning rusted window frames and metal doors, they repainted them with thick, anti-rust paint. Next, they removed cracking paint and mold from the buildings’ walls and sanded them in preparation for painting the building a cream and coral color. In addition, the faculty members and the students painted maps of Ecuador and the world on one of the walls of the buildings.

A minga, defined as a community workday where residents work on a project for the good of the entire community, was held one of the days. Community members will continue to work on this project without the students, installing new windows and working on creating a new administrative office.

While the building improvements were important, it was the time spent with the people of Motilón Chupa that made the experience unforgettable for Luhtala.

“I was struck by their generosity, and their willingness to learn about my life,” said Luhtala.

She was taken aback by was their interest in Luhtala’s fair-skinned appearance and light red hair. It led to conversations about race and beauty.

At the same time, Luhtala’s fascination with their lives was just as strong. She and her fellow students were able to immerse themselves in the local culture. They also had a lesson in Kichwa, the language and culture of the indigenous people. It is the first language of the people of Motilón Chupa, with Spanish being second. Luhtala said Kichwa had no relation to Spanish.

“The work that Tandana does is so important because it focuses on the lived experience of community members,” said Luhtala. “This trip wasn’t about a group of volunteers coming to help a community in need. People in Motilón Chupa have a lot of political agency, and they exercise that every day by choosing to maintain control over and to live on their land. I feel very privileged to have been able to witness this and become friends with the people I met there.”

To learn more about local traditions, the students and faculty went to the living Kichwa Museum in Otavalo. At the famed Otavalo Market, they got to do some haggling. Luhtala was surprised, however, that many of the items for sale had nothing to do with Kichwa culture.

Along the way, the students had a little fun with their host families, too. There was a trip to the zoo in Guayllabamba. Luhtala said it was the first time “Mama Maria” had visited the zoo and she had a good time.

It wasn’t an entirely positive experience, however. Luhtala talked about how some members of the community went to the zoo dressed in traditional clothing and Luhtala said people looked down on them for doing so.

The interactions Luhtala and her fellow group members had with the people of Motilón Chupa were more uplifting. Following the zoo visit, they stopped on their way home in the town of Cayambe. There, they enjoyed some bizcochos (crumbly bread sticks), local cheese and hot chocolate. Later, after a potluck lunch, some of the host mothers taught the students how to crochet hats. The students and faculty members responded by showing the mothers how to make origami animals and grilled burgers and made guacamole for everyone.

Luhtala, whose parents, Nola and Bill, live in Westport, returned to the United States after leaving Ecuador, but she didn’t stay long. Last week, she headed to Panama for an internship with the School for International Training. After college, Luhtala, who has two sisters in Emily and Ashley, hopes to do nonprofit work and possibly move to Latin America. Before that, she wants to become fluent in Spanish.

“As to my future plans and potential work with a non-governmental organization, I’d like to focus on addressing environmental racism in Latin America and/or promoting gender equality,” said Luhtala, who wants to encourage Waunakee High School to partner with Tandana in the future. “Both of these causes are very important to me.”