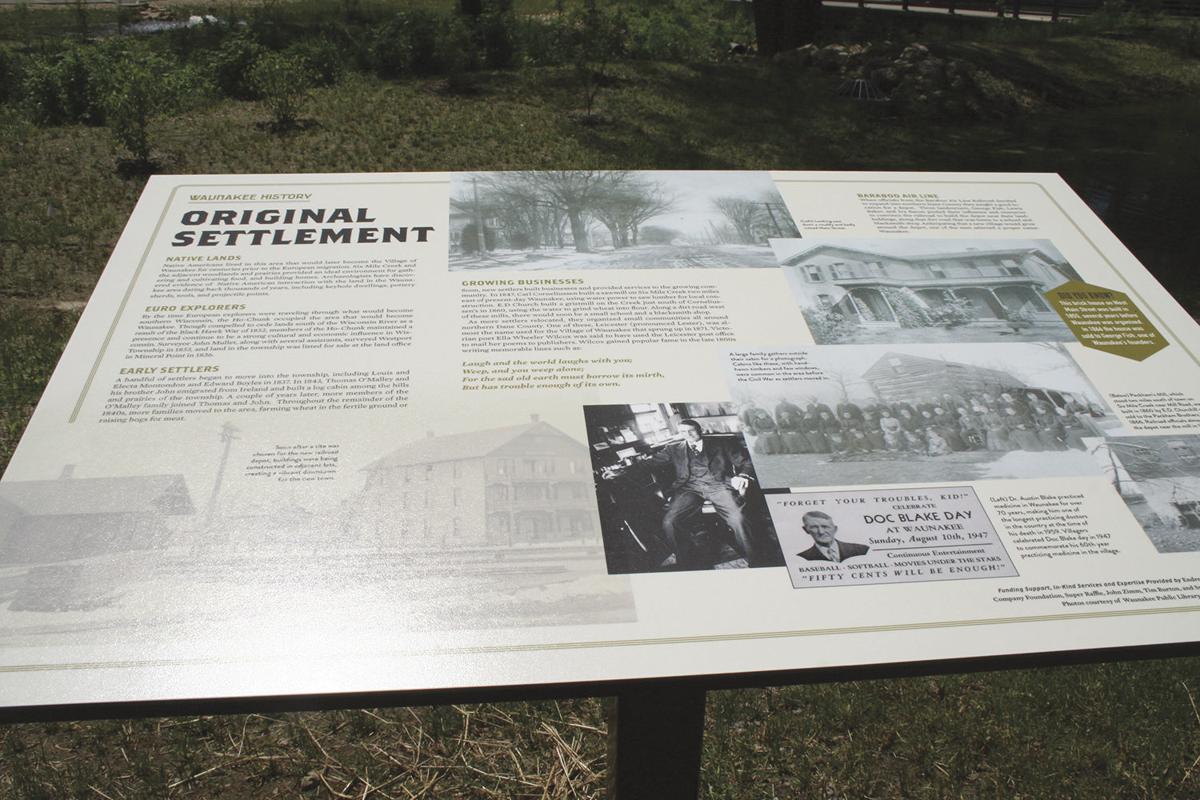 This kiosk, one of four installed, focuses on the original settlement of Waunakee.

This kiosk, one of four installed, focuses on the original settlement of Waunakee.

Now Waunakee residents and those who move into the village can explore their community’s past through four new kiosks that have been installed downtown – three along the path behind the Waunakee Public Library and the fourth near the Waunakee Depot on Main Street.

Wednesday, the village unveiled the kiosks with many who contributed grants and in-kind donations to see them through to fruition.

Village Administrator Todd Schmidt said he received grants from the Endres Manufacturing Foundation and the Super Raffle to fund the project about four years ago.

John Zimm, who worked as an editor with the State Historical Society, provided the research and wrote the text, and the photographs came from the Waunakee Public Library and Schumacher Farm Park’s collections.

Each kiosk depicts different developments of village life – early settlement, agriculture, the role of the military and contributions of veterans, and commerce and transportation.

Schmidt said both the Endres Foundation and Super Raffle grantors “agreed to support these projects with the real purpose of not forgetting where Waunakee has been.”

Waunakee resident Tim Burton, who works at Madison Magazine, was the creative director.

Diane Endres Ballweg from the Endres Manufacturing Foundation said the historic pictures featured on the kiosks remind her of her childhood in Waunakee.

Located near the library, they help distinguish it as a destination and place to stop when residents are walking or biking along the trail, said Jean Elvekrog, president of the library board. Elvekrog also worked with Zimm on the research into the village’s history.

As for the Super Raffle, the organizers are always looking for village projects to donate proceeds to, said Leroy Adler, one of its chairs. Adler said the raffle has been in existence in Waunakee for about 40 years.

“The village brought this up and we were more than happy to be part of it,” Adler said.

Schmidt said research was done to find the most durable construction, and the lifespan should last beyond 10 years.

In the absence of a historical society, Schmidt and others sought ways to preserve the village’s past.

“Fortunately, there’s a lot of people in Waunakee that will keep that effort going... recognizing its past and conveying the history,” Schmidt said.

Zimm said the kiosks are a way to “show appreciation and be thankful for those who created the village we live in.”

“We have a good community,” Zimm said.