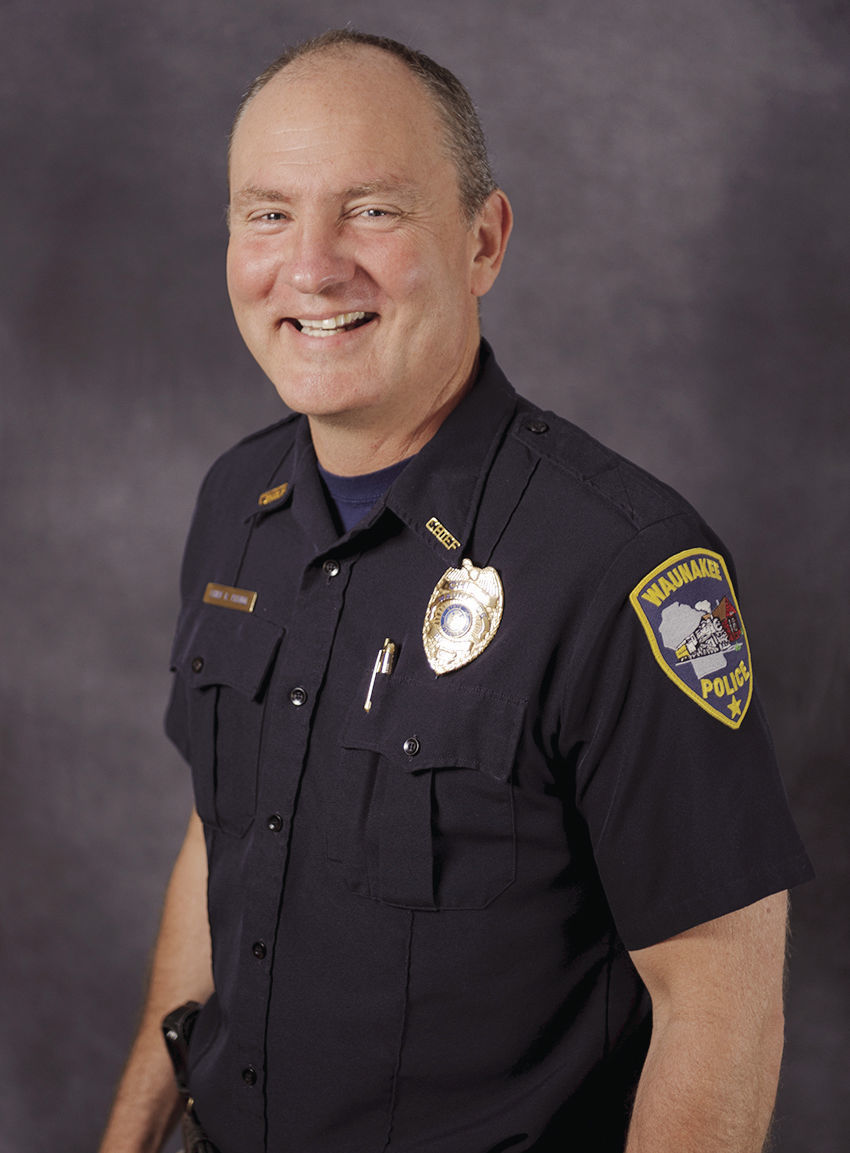 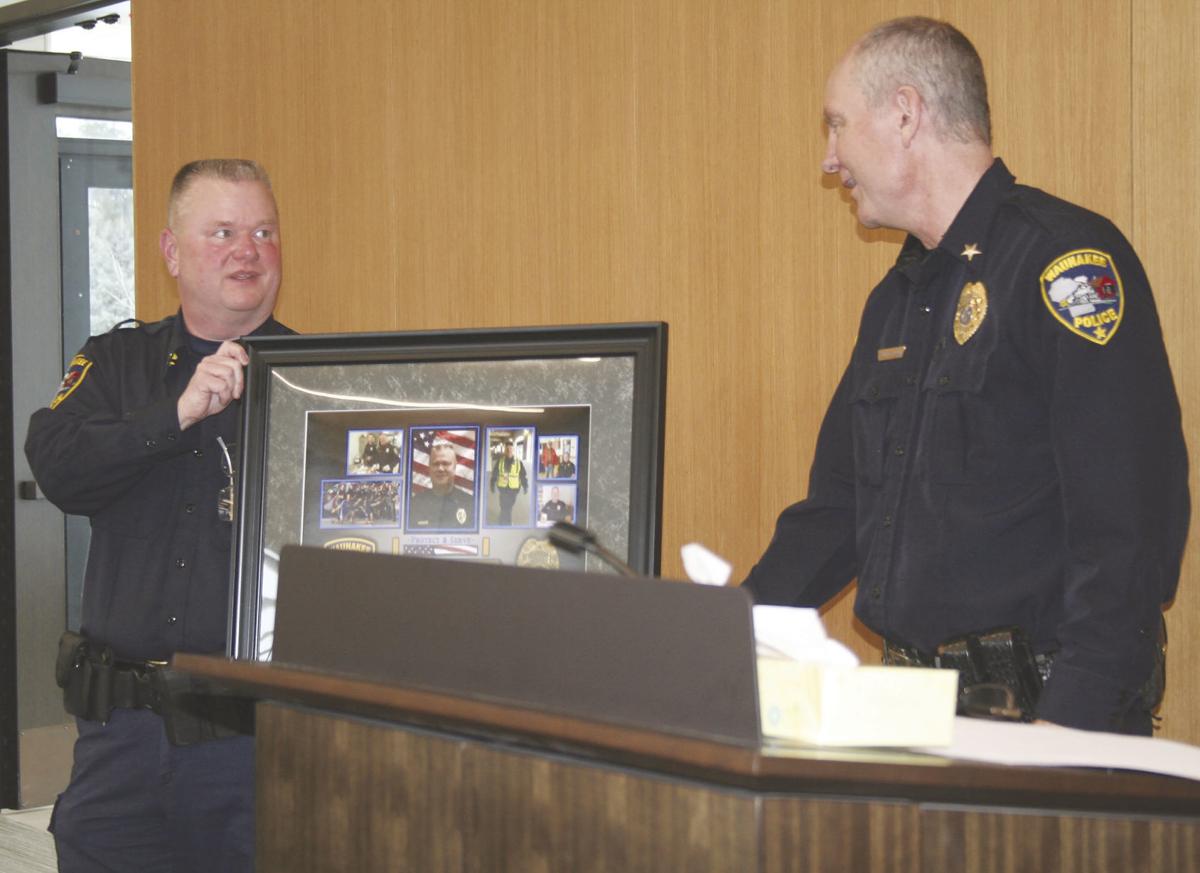 After more than 30 years on the Waunakee Police force, Chief Kevin Plendl will retire at the end May. Never again will he worry about the phone ringing in the middle of night and having to respond to an emergency.

While Plendl said he’ll miss all of his officers and the village staff he has worked with, he looks forward for a chance to decompress – an opportunity he has just one week of the year when he fishes in Canada out of cell phone range.

Plendl began with the department as an officer at age 20. At that time, he usually worked at night by himself, he said, and the job was quite different.

“The equipment compared to what it is today was archaic,” he said. During his first three to five years, he remembers dealing with a lot of non-compliant individuals with hands-on, physical arrests of people resisting.

“There was no such thing as a taser. We didn’t have tasers or pepper spray,” he said. “A lot of it was technique of just physically trying to control people.”

Plendl had been on the job maybe six months when he made one of his most memorable arrests. During a traffic violation stop, Plendl learned the car was stolen and later learned the driver had been involved in a robbery in Madison. A firearm was in the vehicle.

It was one of three times when, Plendl said, he felt luck was on his side. He said his training was minimal and he ended up making the arrest with a deputy assisting him.

The driver and his passenger had been separated.

“Something one of these guys said to me always stuck with me. The passenger kind of in a roundabout way said, ‘You owe me. I did you a favor,’” Plendl said.

Plendl asked how, and the passenger went on to say, “That guy was going to shoot you when you came back up to the car, and I told him this isn’t worth it.”

The gun was under the driver’s seat.

“Whether that conversation actually happened, I don’t know. I know what that guy told me,” Plendl said.

The second lucky incident for Plendl occurred after a juvenile had escaped from juvenile facility. Plendl spotted him at 1:30 a.m. on West Street talking to some girls, and the minor fled. As Plendl exited his squad car, one of the girls told him not to follow the boy, that he had a gun and would shoot him.

“He had seen me drive the by the first time, and what he told these girls is, ‘He’s going to come back; I’m going run. He’s going to chase me, and I’m going to shoot him,’” Plendl said.

“I feel very fortunate about that. It turned out OK,” he said.

The third occurred at Kwik Trip, where Plendl conducted a traffic stop. The driver had significant warrants for him and was non-compliant.

“The driver was crying, and he was upset,” Plendl said.

As Plendl asked the man to step forward, the man repeatedly said he would not go back to jail.

The man opened the passenger side of the vehicle and began digging around, and Plendl pointed his gun at him.

“He had made a comment to some other guys in the vehicle, ‘I’m not going back to jail. This guy’s going to have to shoot me.’” Plendl said.

The man was looking for a large knife in the back seat of the vehicle.

“We kind of had this little stand-off for a little bit. It was probably 30 seconds, but it seemed like an hour and half. I consider myself lucky that again, he didn’t come at me or require me to do anything or to end up shooting him,” Plendl said.

Changes in the department

Plendl said the Waunakee Police Department has changed a great deal since he first began as an officer. It employed six people then; now 21 work there. Technology has also changed. Officers had no mobile data computers in cars, but now they can take a person’s fingerprint and if they are in the system, identify them.

Training has also increased, and today, officers use body cameras and video cameras in cars.

Plendl moved through the ranks from officer, to sergeant, to lieutenant and was promoted to chief 20 years ago. Along the way, he earned his bachelor’s degree when he was 30.

As chief, one thing he stressed was to treat people better than his officers would want to be treated. He said when he started in the job, no emphasis was placed on having dialog with people, just taking down information and making an arrest if needed.

“It’s just an entirely different approach that we have now,” Plendl said.

The officers engage in scenario-based training using dialog, learning to speak with people in certain situations.

“And just emphasizing to police officers that people are under stress. They might be somebody entirely different, but given the stress that they’re under, they might be aggressive – they might be more verbally aggressive, physically aggressive. You’ve just got to take all these things into account,” Plendl said.

Officers try never to take anything anyone says under that stress personally.

For a department its size, the officers use force very rarely, and it has been nearly three years since the department has had a citizen complaint.

Plendl said last year, he received a letter from someone commending an arresting officer.

“Somebody who was arrested took the time to write a letter to say, ‘I was horrible… but the officer continued to treat me with respect,” Plendl said.

Before Plendl was promoted to chief, the department did little as far as drug investigation, even though drugs were noted as a main concern in citizen surveys.

When Lt. Joe Peterson, who recently retired, joined the department, it became a priority, and the department served search warrants and made strides.

Plendl also helped foster a culture of positive interaction between the officers and the community.

“One of the things I’ve always told people is make sure your actions are legal, they’re ethical and you always treat people with respect. And your decisions are always in the best interest of the department and the community. You do those things, and you can’t go wrong,” Plendl said.

Plendl said the department has also increased its level of service without adding cost.

The department has also retained officers. Only two have left since Plendl became chief 20 years ago. He said five other departments in Dane County pay a higher wage, but officers have continued to stay in Waunakee.

Plendl’s career has had low points, particularly tragedies that have stayed with him, he said.

Plendl began to consider a career in law enforcement as a teenager, he said. His father was in the State Patrol and told him every day on the job was different and he could interact with people from different backgrounds. Plendl said he, too, has enjoyed meeting people from different demographic backgrounds. He also enjoys running into people at events like WaunaFest. Sometimes, an individual he arrested years ago will come up to him and introduce their son or daughter.

“It meant a lot to have those interactions,” he said.

After retirement, Plendl plans to enjoy time away from the stress of being on call 24/7. He looks forward to fishing and playing golf, and then doing volunteer work afterwards.

His retirement date is May 29, and afterwards, Lt. Adam Kreitzman will take on the role as chief.

Overall, Plendl has appreciated his career and working with a supportive village board and administration.

“I’m extremely grateful for the opportunity I’ve had. I’ve worked with a lot of good people,” he said.