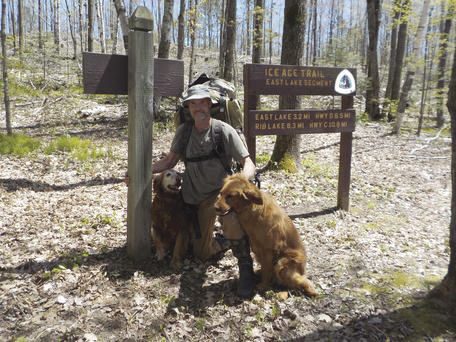 Fire, Walters, and Ruby about to start their journey.

The pups loved this adventure. 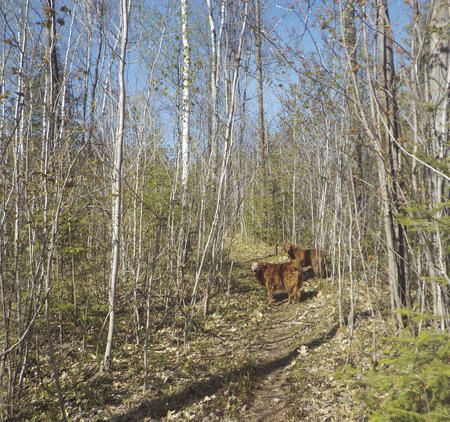 This aspen regeneration project is a win, win for both wildlife and people.

Fire, Walters, and Ruby about to start their journey.

The pups loved this adventure.

This aspen regeneration project is a win, win for both wildlife and people.

This week my field work took place in northern Taylor County on The Ice Age Trail with my pups Fire and Ruby. As you will see when you read it, my mind is all over the place.

The last two weeks my fishing/camping trips have been canceled because of either heavy rains or very strong northeast winds. With literally only 72 hours before my deadline, I came up with the idea to do a short hike on The Ice Age Trail and sleep on the ground.

Another side note is that 31 years ago tonight, I climbed into a bear stand that I had built the year before while I was camp manager at Chimo Lodge in Ontario, Canada, and hand wrote my first column which was for the Poynette Press. My good friends Dick and Molly Emerson owned The Poynette Press and were my true mentors in this business.

So I am at parked at a wayside on Highway 13 between Medford and Prentice where the trail crosses and I do not have a map and do not know if I am going east or west. I am loading my external frame backpack which I purchased back in 1991 to hike The Appalachian Trail and I realize that the buckle on the waist belt is broken so I tie it up with baler twine.

I also met four long time readers of this column that read it in Medford’s “Star News.” The Star News “O’Leary’s” have published my column since 1994 and are faithful friends.

So I start hiking and I am wearing knee boots that I just purchased, there is no shade due to a late spring, and the sun is kind of hot. So after about a mile, I took a break and my pups are loving life. When I started hiking again, I went only about a mile and I said I need another break, and this time I took a nap on the forest floor.

When I woke up I was a new man and felt like a million bucks. The pups and I came to an aspen regeneration project (clear cut) that I am sure is being completed by local loggers and managed by the DNR ,and was I ever impressed. Until I came to this project, there was no deer sign, but when I hiked through it, it was abundant. Clear cuts create a food factory for deer, grouse and many others. Old growth forests are beautiful but not much food in that factory.

I had no idea what would happen on this short journey, but I came to the where the Chippewa, Wisconsin, and Black Rivers water basins all meet, and did that ever spring up some memories.

Back in 1991 after putting away 1244 miles on The Appalachian Trail, I canoed the Wisconsin River.

In 1993, I canoed the entire Chippewa River from north of Glidden to the Mississippi River. When I made it to Glidden I stayed at Matt Hart’s home. Matt and Robert Hart were brothers, local heroes, and owned the Glidden Enterprise. Matt talked me into going downtown for a beer and I met a gal that night that became a part of my life for five years.

In 1994 I tried to canoe the Black River. I started at Medford, ran out of water, and was hiking through the bush to a forest road when I literally ran head first into a German hornets’ nest. I sustained enough stings to kill an elephant. I had to do another trip back to the river and with a canoe on my shoulders and ran into that nest again. That experience was really bad, and if I have brain damage, blame it on the German hornets.

A bit of a dilemma that I had today was that I had no bug spray. If black flies were not draining my blood, it was mosquitoes. I had a black fly crawl into my right ear and it went in so deep I could not get it out or kill it. Every once in a while, it would move around just to let me know it was there, and it made me wonder how long will that black fly’s body actually be in my ear, and are there any in my ears from 20 or 30 years ago?

Once I got my legs I really enjoyed hiking and most importantly the forest. There is something that you can only understand about northern forests in late spring if you are actually in the forest, and I think the best word would be “life.”

With that I can see I am out of space and all is well in my life. Hope you can say the same!